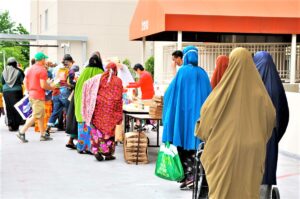 Two weeks ago, we covered the part of Franklin Avenue west of Cedar Avenue. They were having some hard times but meeting the challenges with the resilience borne of centuries of standing against settler colonialism. Some of the denizens of this issue’s focus, the part from Cedar to the Mississippi River, comprise those settler’s descendants. But the Seward neighborhood is diverse. A significant part of the population includes East African immigrants from Somalia and Ethiopia primarily, as well as recent or second or third generation Latinx folks, some of whom are also indigenous to the Americas, if not the upper Midwest.
Question: How has Seward neighborhood, and its stretch of Franklin Avenue, been faring? What with plagues, police brutality, and riots*? (*Language note—we’re calling the destruction that occurred after George Floyd’s murder by this simple word just because it’s short. Please forgive any negative connotations and know that we in no way condemn anyone’s protests of any kind against racially motivated murder. If there were a less ambivalent single word to use, we would use it.)
Answer: It’s complicated. Take the Seward Café, for example. It had been completely closed since mid-March, and running a “save the cafe” GoFundMe (still open at https://www.gofundme.com/f/save-the-seward-cafe, now with a $50K goal). Then on April 20, they announced an online store with delivery, but only on a single day, Sunday. That was doing really well when it was 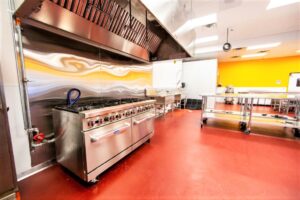 stopped cold by the riots that hit Seward. Not as hard as some places, but there are vulnerabilities—like one subsidized tower and two public housing towers, both with a high concentration of elders and Somalis, and Somali elders. Seward Café pivoted to food distribution, which they were still doing at the time of this writing.
The cafe’s excellent website was not updated for this change, except for a brief message on the ordering page that they were not taking orders. Their Facebook page had some information, but mostly it seemed to be coordinated—as has happened in a lot of inner city neighborhoods—in a hyper-local, ad hoc fashion, through word of mouth, old style flyers, phone trees, and in some cases, graffiti on a boarded up window stating “Free Stuff—Seward Cafe” and an arrow pointing the direction. (Some of this is for information security reasons, alas.) On the Facebook page on June 4: “Hey all, food distro is going really well. Estimating that we’re moving about $4,000 a day from people who are donating to people who are receiving. We could really use the help of a translator and/or someone bilingual in English and Somali to help us better serve our neighbors. We’ll pay in cash! Let us know if you or someone you know would be interested in doing that.”
On the most intense night of riot and arson, before the curfew imposed May 29 through June 3, Seward Neighborhood hastily organized very effective block watch parties which operated at least over the long weekend until the curfew was lifted. They were not able to protect all buildings, but they were overall very effective. A widely publicized incident occurred as part of looting of Skol’s Liquor Store. Three young boy-men from Eau Claire, Wis., had come to Minneapolis seeking thrills and thought they hit the jackpot when they saw the busted open liquor store and not a cop in sight.
A neighborhood watch caught them in the act, and instead of handing them over to MPD, they handed them over to the AIM Patrol. The AIM Patrol filmed their encounter with the boys. They made them lie on the ground and confiscated their phones, then sat them on the curb and lectured them about their privilege, about what the protests were supposed to be about, about colonialism and their complicity in the oppression of Native Americans. They mentioned how their lives could have been ruined if they had had to spend the night in jail or go to trial. Instead their temporary captors just called their parents and said, “Come get your boys.”
I saw the video, but it was gone the next day as if it never existed. I guess their parents had good lawyers. Such is the long reach 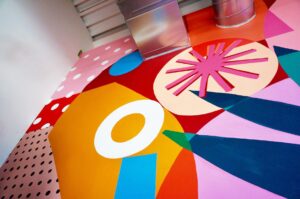 A large mural in the new Seward Makes retail space

of white privilege.
Seward Neighborhood group
and Seward Café are among many groups that were spending the time from when the riots began to recently mainly in emergency mode, collecting and distributing food, diapers, hand sanitizers and money. Other distribution sites included Rep. Ilhan Omar’s campaign office at 2327 E. Franklin Ave., formerly the office of the Sierra Club. Some of the high-rise housing itself was used as a distribution site. Things on that front have not been wholly resolved but are a little less frantic as businesses have begun to partially open up.
Seward Makes is almost to normal. (I won’t say back to normal because their planned retail opening was curtailed by COVID-19.) Seward Makes is a shared commercial kitchen between five food producers. Seward Soft-serve is the only one that’s purely a public serving concern; the other four either sold to other retail outlets or directly by delivery. The other businesses are You Betcha Kimchi, which moved there from another food incubator, Northstar Kombucha, Serious Jam, and Qahwo Coffee. The coffee producer is POC-owned, roasting Ethiopian coffee and sometimes adding authentic spices sourced from East Africa. Seward Makes is also a CSA pickup site for Growing Lots Urban Farm. Check out their Facebook page for hours and specials.
Pizza Luce was mostly unfazed by COVID-19 (dine-in was closed, obviously, but delivery and pickup until the very civilized hour of 2 a.m. continued for the most part). But they were closed over the long “curfew weekend” and on restricted hours for about a week after that. They’re back to normal hours now, but still only delivery and pickup.
Soberfish, a very popular Thai-Japanese fusion place, is also sticking to delivery and pickup (delivery through Bite Squad). Capitol Cafe, a very community-oriented Somali-owned business, has walk-up and even dine-in options. A couple of other walk-up options are Code Blu Coffee and the Pita King take-out restaurant.
Free meals continued almost without interruption at Soup For You, based in the Bethany Lutheran Church. Before COVID-19, SFY offered patrons a cafe-style service of soup, salad and bread, with optional coffee and dessert. Payment too was optional. Since COVID, they are offering bagged lunches at the side door, the same hours, 11 a.m. to 1 p.m., Monday through Friday. There was a brief interruption due to the riots and protests, but they are back now.
Cafe Racer, a POC-owned local icon on 25th Street in Seward, has gone through changes. COVID closed them for about a week for planning. Since they operated a food truck before, from late March through May 28, they ran a “food truck menu” with online ordering and pickup from 11 a.m. to 1 p.m. At some point they reinstated Breaking Bread, where the last Monday of the month featured free lunch. Like many businesses, they closed for a few days in late May out of respect for Floyd, then reopened June 2, doing Breaking Bread every day, Tuesday through Sunday. At the time of writing they were playing it by ear, but possibly doing this service through the whole month of June. Check the Facebook page for daily updates.
Back on Franklin, Boneshaker Books is another complex story. The founding collective owners decided to close a few months ago, but a newly formed collective, comprising some volunteers at the store, as well as community members, offered to “buy them out.” This was great news not only to book fans, but also to the Women’s Prison Book Project and Twin Cities Democratic Socialists of America, who are office tenants in the store. Also, to the many communities that use their free meeting space. No word on a re-opening date yet. 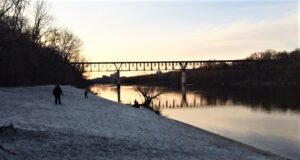 We’ll close with some updates about Seward Co-op. Their Franklin store has had a hard time. They had an early case of COVID that closed them for about a week in March. In the riots, there was looting and damage to their ATM in the entrance. A newsletter for members details the costs of this damage:
“Both stores and the Creamery were closed entirely from Friday, May 29, through Monday, June 1, as well as the morning of Thursday, May 28. Our estimate of lost sales from this period is approximately $515,000 … [which] would equal about $200,000 of lost gross margin. … [C]osts for shifts scheduled but not worked amounted to $105,000… lost inventory was approximately $10,500 (much of which we were able to donate to various community organizations). [After bills for property damage repairs, etc.] … total costs of the closure will be close to $350,000.”
Also, we heard this from Joe Kruse, Seward Co-op worker and member of UFCW Local 663:
“On June 16 nearly the entire staff on shift at Seward Co-op’s Franklin Ave store walked out for a 9-minute work stoppage to mourn the murder of George Floyd and stand in solidarity with the protests erupting around the world. …With our action we also hoped to encourage the Seward Co-op to announce its support for dismantling the MPD and called on the leadership of UFCW Local 663 (our union) to demand Bob Kroll’s immediate resignation. … On the day of the action, we were blown away when nearly everyone on shift walked out with us. I chatted with some workers afterward who we hadn’t been able to reach out to about the stoppage beforehand, but still decided to walk out on the fly … To me this shows that in historic and tumultuous moments like these, when people are given an invitation … many will act.”