The last days of the last Lyndale Avenue record store 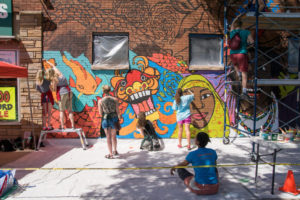 On Treehouse Records’ web page there is a little tagline that says “The World’s Last Record Store.” I suspect this dates from the dark days of waning fortunes for record stores, before the Great Vinyl Resurgence of 2009. (I just made that up, but it’s vaguely accurate.) Nowadays there are lots of record stores, and lots of other types of retailers sell vinyl, both new and used. None of which is meant to minimize the huge importance of Treehouse Records, which will close at the end of 2017, nor to downplay what a loss this will be to the vinyl-loving community and to the history of Twin Cities music.

In 1972, there was already a record store at Treehouse Records’ location—the northeast corner of 26th Street and Lyndale Avenue South. It was called North Country Music and was considered one of the best record stores in town. (For the benefit of those who were not alive in 1972, neither CDs nor indeed cassette tapes really existed commercially at this time. It was basically LPs or nothing. There was this thing called an 8-track, but you sort of don’t even want to know about that. Their entire raison d’etre was that you could play them in a car, unlike, obviously, records.) The record store was bought by the very influential Vern Sanden, who in 1973 changed the name to Oar Folkjokeopus. Sanden was a guy who liked to show off his knowledge of the eccentric and the obscure, and Oar and Folkjokeopus were the names of two such albums that he apparently liked a lot. Or maybe he just thought they sounded cool together. Anyway, Oar Folk, as the aficionados called it, became legendary. And it still is, as is its successor Treehouse Records.

This is how as simple a thing as a record store becomes a legend. In the formative days of punk rock, let’s say the mid-1970s, there was an entire insider culture growing up around rock music as it was being transformed from the solace and possession of the dispossessed young into a multi-billion dollar big business on the one hand, and its anti-capitalist reaction, punk rock (which also, to be fair, made quite a chunk of change in its day) on the other. The rock/pop/punk music culture consisted of interrelated institutions, which literally depended on one another for their existence: bands and artists, of course, and record labels, but also record stores, live venues, radio stations and DJs, rock music journalists (a profession in its infancy then) and of course, the fans and customers. Peter Jesperson, for instance, one of the founders of the great Minneapolis label Twin/Tone and also manager of Oar Folk from 1974 to 1984, says in The Twin/Tone Story, “There were four things that made Twin/Tone possible: 1) Band: The Suicide Commandos; 2) Record store: Oar Folkjokeopus; 3) Music journalist: Andy Schwartz; 4) Live venue: Jay’s Longhorn.”

The Wikipedia page for Oar Folkjokeopus notes it was a popular hangout for members of local bands such as Hüsker Dü, The Replacements, the Suicide Commandos, Soul Asylum and many more. Martin Keller, writer for the Minneapolis City Pages, said about Oar Folk: “A lot of people trace the whole rock scene (in the Twin Cities) to Oar Folk. …You’d always run into [Peter] Jesperson there because he worked the counter most days. [Bob] Mould was in and out on a regular basis. It was a real nice hangout.” Lori Barbero, drummer for Babes in Toyland said concerning the store, “I have about 8,000 records, and I bought 7,000 of them at Oar Folk.” Grant Hart of Hüsker Dü was not so fond of the store: “Oar Folk had a real snobbish attitude. It was a place to be condescended to.” There is a lot of mythology about the condescension of record store clerks in general. Jeff Severns Guntzel, writing in City Pages, quotes Bob Mould (Hüsker Dü, Sugar) in an interview for Gay.com, in response to a question about the record store subculture of the late 1970s and 1980s: “It was a different culture and a different time. I think the sadness sets in for me when I consider the ritual of having to get a job to make money, to get on the bus to go to the record store, to spend time reading about music—buy the right records, going to the counter and hoping they don’t sneer at you when you bring the record up. That whole thing added value to the process and to the music, made it more valuable as an experience. You had to really work for it, and you had to study …” Jeff himself adds, “It’s kind of silly, but I always kind of liked the challenge of not making the counter clerk sneer at my purchases. It made me sharp—made me dig a little deeper. It never meant I didn’t buy what I came for, but it did often mean I threw a little something extra in. To this day my record collection is full of those little somethings, and I’m glad for it …”

In 1984, Oarfolkjokeopus was nearly destroyed by a fire. However, it rebuilt, regrouped and reopened in 1985, and it was at this time, as they were re-staffing, that Mark Trehus joined the staff. He was also starting up and running his own record label called Treehouse Records as a pun on his last name. When Sanden decided to leave the business in 2001, he sold Trehus the business but not the name. By this time the record label was dormant, so Trehus used the name for the store, but little else changed. And now, 16 years later, as he approaches his early 60s, he too is semi-retiring and at last the store itself will close.

Treehouse Records will continue to have deep discount sales through the year as it moves toward closing down. You can sign up for the email newsletter to keep abreast of what’s happening. Also, Trehus says he will continue to sell a curated selection of rare vinyl at trade fairs and events, and also to sell online through other web-based means. Trehus owns the space as well, and will continue to own it and exercise control over what types of businesses can inhabit it, so no need for now to worry that it will become a Target Express or something. Nowadays the record store scene is strong and varied across the region, so even though Treehouse Records will be missed, there are plenty of other worthy places where you can take your day-to-day vinyl cravings.

For more information:
Southside Pride also reported on Treehouse Records in August 2014.
“The Twin/Tone Story” and “It Happened at Oar Folkjokeopus” are both available to read online.
Podcast: “The Minneapolis Music Scene: 1975-1980 (Part I)” by MinneCulture at https://beta.prx.org/stories/62831
Photography book: “Heyday: 35 Years of Music in Minneapolis” by Daniel Corrigan