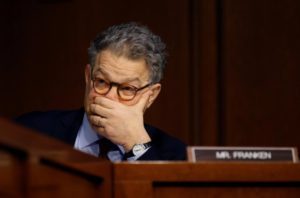 First, let’s look at the facts.

Leanne Tweeden wrote to Al Franken: “You forcibly kissed me without my consent, grabbed my breasts while I was sleeping and had someone take a photo of you doing it.” Tweeden agreed to rehearse a skit with Franken in which he kisses her. This was a skit and a kiss they performed throughout their 2006 USO tour. She says he put his tongue in her mouth and she felt violated. Al says he doesn’t remember the kiss that way. In either case, she gave her consent to rehearse the kiss as part of the skit, so, it’s not true that he kissed her without her consent.

Yes, of course, it is a stupid sexist joke. It objectifies the victim by making it seem her only worth is as a sexual object.

Al Franken was acting like a crude burlesque comic.

Bob Hope, a former burlesque and vaudeville comic, was the face of the USO for 50 years.  He always toured with a dozen “American Beauties,” whom he would introduce and interview. His job was to entertain the troops who were then all male and very eager to see a woman:

“Last Christmas in Alaska, I met a GI who was so lonely he was going steady with his tattoo. And his buddies kept asking him if she’s got a sister!”

“This ship stays at sea a long time. They only go back to port when the chaplain asks to see a chaplain … To give you an idea how long these guys have been at sea, they just made Phyllis Diller their pinup girl.”

The 2006 USO Tour didn’t have “American Beauties,” it had the Dallas Cheerleaders, Al Franken as the comic headliner and Leanne Tweeden—the Playboy cover girl in August 1996 and Hooters Calendar pinup in 1993 and 1994.  She was invited on the Tour primarily because of her nationally acclaimed secondary sexual characteristic—her breasts. Men get turned on looking at breasts. Breasts remind them of sexual differences and sex, and that reminds them of the thrill of endorphins released into the consciousness at the moment of orgasm. The body acts in predictable ways to ensure preservation of the species.

The USO shows are crudely sexual, and they reinforce dangerous stereotypes about men and women. The model for the men is a crude comic who finds sexual meaning in everything a female says, and the women are “American Beauties,” Dallas Cheerleaders, Hooters waitresses or Playboy Bunnies. Those were the crude outlines of sexual identity portrayed on the 2006 USO Tour.

It probably hasn’t changed much since then.

And that’s a seriously wasted opportunity.

Being warrior in the past meant having a license to kill, plunder and rape.  There were no laws.  Your weapon was the law: Kill all the men!  Rape all the women!

The attack on Al Franken has already weakened progressive resistance to Trump and the reactionary Republican Congress. Senator Chuck Grassley has decided to move forward with the nomination of David Stras to the 8th District Court of Appeals. Franken originally objected to the nomination:  “Justice Stras’s professional background and record strongly suggest that, if confirmed, he would embrace the legacy of his role models and reliably rule in favor of powerful corporate interests over working people, and that he would place a high bar before plaintiffs seeking justice at work, at school, and at the ballot box.”

Normally, if a senator objects to a judicial appointment from their home state, the committee chair will not hold a hearing on the appointment. Grassley has decided to hold a hearing on Stras, and go against precedent and tradition in this appointment (possibly) because Franken is in too weakened a condition to object.

This is a serious loss for all of us.

Women senators (Gillebrand, Baldwin and McCaskill) have said they will give Al Franken’s contributions to their campaigns to charity.

That’s a loss for them and, if they lose their elections, a loss for all of us.

Franken is one of a small handful of progressive voices in the Senate. He has been a champion for women and minorities.

His silence is a tremendous loss.

Yes, the kiss may have been more intense than expected, and, yes, the photo stunt was adolescent, but neither act rises to the level of sexual predation. He was looking for a laugh, not a sexual thrill. He wasn’t using his position to force Leanne Tweeden to have sex with him. He was crude, but he wasn’t creepy.

The intended consequence of this campaign against Franken is to weaken opposition to Roy Moore’s campaign for the U.S. Senate in Alabama. Moore is a publicly acknowledged pedophile. He has been accused by a victim of forcing sexual relations on her when she was 14. He chased after high school girls in the local mall when he was in his 30s. But many Alabama Christian Evangelicals don’t care about that. He’s not a Democrat. They can count on him to be pro-life, to vote against abortion. He won’t support a woman’s right to terminate a pregnancy. He supports the white patriarchy.

Conservatives are much more tolerant. It doesn’t matter to them that Trump was going to “grab ‘em by the pussy,” or that Moore is a pedophile. What matters is that Trump and Moore will reaffirm white male supremacy.

I believe the women who say Al touched them inappropriately on the butt when they were getting their pictures taken with him at the State Fair. Al has apologized. It is always wrong to touch a woman without her consent.

I don’t believe Leanne Tweeden. In her on-air interview with Congresswoman Jackie Speiers she says she had a revelation: “At that moment, I thought to myself, Al Franken did that exact same thing to me.” But she told Tom Arnold she had talked to Sean Hannity about that photo 10 years before in 2007. It was a staged melodrama, but a very effective one. Liberals demand spotless heroes.

Well, Al, you’re not spotless, but you’re good enough. Your jokes are corny sometimes.  But they were never meant to harm anyone. I hope the women you offended can forgive you.

You’re smart enough. You know how it works. And your staff (that you made a special point of thanking in your resignation speech) knows how it works. The rape victim who was working with you and your staff on a bill to fund training of police to work with victims of sexual assault and trauma asked that you no longer sponsor her legislation. Doesn’t she still want to use the advance work and research that your staff has already done on this project? All the work that you have already done for women’s rights and empowerment doesn’t need to be abandoned.

And doggone it, we love you, and we need you. If you don’t want to be senator any more, “That’s OK.” But you know how bills are written, how they’re passed into law and how they’re enforced. We need you to teach us about the process.

You were doing such a great job on Jeff Sessions that Field Marshall Steve Bannon decided it was time to get Generals Sean Hannity and Roger Stone (close friend to Leanne Tweeden’s radio co-host) to send in someone to blow you up.

Everything they do is meant to blow up the system. You were an easy target—a public performer, a comic, but their intent is to burn down the Reichstag. They want to de-legitimize democracy so they can justify tyranny, autocracy, the rule of the bully in the schoolyard.

We need to stand up to them. And we need to be united. There are many more of us than there are of them, many more working people than billionaires wanting tax cuts. They want to divide us, get us fighting among ourselves.

Yes, you did some gross and stupid things around women. So have most other men your age. For the past few weeks you have made every man your age in America spend some quiet time thinking about what a jerk he’s been with women at some time in his life.

That needs to change.

Yes, let’s do something about it. Let’s get something through Congress that creates training for police officers dealing with trauma and sexual assault.

Let’s all of us work on it.