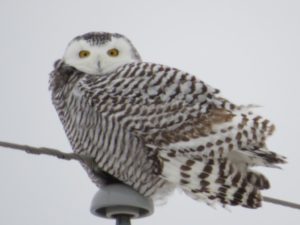 Finally! It’s winter! Really winter! With a string of sub-zero temperatures and wind chills! Would you rather have this bitter cold, or the record-breaking 50+ inches of snow dumped on Erie, Pa., on Dec. 25 and 26, over a span of 30 hours?

On several occasions, I’ve had the pleasure of listening to Stan Tekiela presenting on bird and other nature-related topics. He’s a local, well-known around the world birder, photographer and author of field guides, and I have talked to him on several occasions. Bird stores, book stores and visitor centers in national parks all carry his books related to their local area, such as “Birds of the Dakotas,” “Trees of Michigan,” “Wildflowers of Minnesota,” and more recently, for children and those who are children at heart, “Whose Butt?” I am fortunate to be one of the latter and received a copy of “Whose Butt?” from Santa this Christmas. I was correct on identifying 80% of the wildlife butt pictures in the book.

I also received, as I do most every Christmas, a copy of the next year’s Skywatch magazine, which is a cool but simple month-by-month calendar of celestial events for the coming year. There are some fairly good sky-watching spots in Powderhorn Park; you don’t have to drive out to the middle of nowhere.
In January, we hope to head north for a day or two to view the Snowy Owl irruption. We haven’t been to Sax-Zim Bog in several years, in fact, not since they built the Welcome Center 50 miles northwest of Duluth. It is open and staffed mid-December through mid-March, “a place to find out about the latest bird sightings, thaw out, warm up with some hot cider, buy a T-shirt or other souvenir, and use the outhouse.” According to its website, the “bog” itself is “actually about 300 square miles of not only bog, but aspen uplands, rivers, lakes, meadows, farms and even a couple towns! It is not just a giant bog, but rather a ‘magic mix’ of habitats that boreal birds love.” (www.saxzim.org)

Now, back to Powderhorn. I have not spent as much time at the park as usual, for weather and other reasons, but I will correct that soon, I hope.

There have been from hundreds to thousands of American Crows passing over and sometimes stopping in the park and neighborhood. And there have been a few Canada Geese overhead, but they have nowhere to stop except the grain elevators to the east. On one recent wintry day, we observed a beautiful large V-shaped group of geese flying to the southeast over Bloomington Avenue.

The yard is doing OK with House Sparrows, White-breasted Nuthatches, Dark-eyed Juncos, American Goldfinches and my high points, Northern Cardinals. My high point was going to be a Bald Eagle over 35th Street a few days ago. We were quite sure about it—large, dark with a white head. When it got close, it turned out to be a Crow with a slice of white bread in its bill and covering much of its head. Well, there will be real Eagles and lots of birds and other good things soon.