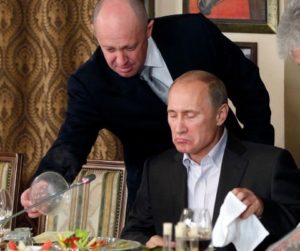 They’ve been playing him for 30 years.

In March of 1986, Dubinin, the Russian Ambassador to the U.N., with his daughter, went up to the Trump Tower to meet Trump. According to his daughter, in an article for Komsomolskaya Pravdanewspaper, he told Trump, “The first thing I saw in the city is your tower!” The daughter reported, ““Trump melted at once. He is an emotional person, somewhat impulsive. He needs recognition. And, of course, when he gets it he likes it. My father’s visit worked on him [Trump] like honey to a bee.”

Later, that fall, they met again at a fancy luncheon and by chance [?] were seated next to each other. According to Trump in his “The Art of the Deal,” he learned Dubinin’s daughter “had read about Trump Tower and knew all about it.” “One thing led to another, and now I’m talking about building a large luxury hotel, across the street from the Kremlin, in partnership with the Soviet government.”

He made his first trip to Moscow in 1987 arranged by the Soviet diplomatic service with assistance by the KGB, according to Politico (https://www.politico.com/magazine/story/2017/11/19/trump-first-moscow-trip-215842).

From Fortune: “In a 2007 deposition that Trump gave as part of his unsuccessful defamation lawsuit against reporter Timothy O’Brien, he describes efforts to launch real estate ventures in Russia through Bayrock Associates, a shady Russian-connected outfit. Bayrock had partnered with Trump on at least four major but failed American projects: the Fort Lauderdale Trump Tower, the Trump Ocean Club in Fort Lauderdale, the SoHo condominium-hotel in New York, and a resort in Phoenix.

“Bayrock had its office on the 24th floor of Trump Tower, and its 2007 glossy brochure featured a photo of Trump and Tevfik Arif, a principal Bayrock partner, who served for 17 years in the Soviet government before emigrating to the United States. It called the Trump Organization a ‘strategic partner,’ and listed Trump as their primary reference.

“Felix Sater, a Russian-born managing director at Bayrock, was convicted of assault in 1991. Then, in 1998, federal prosecutors convicted Sater of fraud, for running a $40 million penny stock fraud in collaboration with the New York and Russian Mafia. In return for a guilty plea, Sater reportedly agreed to work as a government informant.

“Trump testified in his 2007 deposition that Bayrock was working their international contacts to complete Trump/Bayrock deals in Russia, Ukraine, and Poland. He testified that ‘Bayrock knew the investors’ and that ‘this was going to be the Trump International Hotel and Tower in Moscow, Kiev, Istanbul, et cetera, and Warsaw, Poland.’ ”

By 2008, at a real estate conference, he said, “Russians make up a pretty disproportionate cross-section of a lot of our assets. We see a lot of money pouring in from Russia.”

He was the bag man for a money laundering operation of the Russian Mafia. They bring a lot of heroin into the U.S. and they need some place to clean their money, and what better way than to have a front man like Trump buy a casino for cash and then resell it at a loss. After seven bankruptcies, American banks considered Trump a poor risk, but money still flowed in from Deutsches Bank, and bundles of cash appeared for Trump Tower condos. And he probably learned from his business partners about the billions of dollars to be made from the opium/heroin trade from Afghanistan to Russia through Turkmenistan and the possibility of billions more from a trans-Afghan oil pipeline.

He was in Moscow in November of 2013 for his Miss Universe Contest. He had been given $20 million by a Russian oligarch to bring the contest to Russia, and (to make a little extra cash) he was selling sponsorships to Russian banks. He had an interview with Thomas Roberts of MSNBC where he said Putin was better than Obama; he’d done a “brilliant” job: “He’s done an amazing job—he’s put himself really at the forefront of the world as a leader in a short period of time.”

The Russian government was getting a good public relations return on their investment because there was something else happening in that part of the world in November of 2013: The Ukraine was erupting into civil war.

The western half of the Ukraine had always been unreliable. They sided with the Whites against the Reds in the Civil War in the 1920s and they welcomed Hitler as a liberator in World War II. Now, Obama and the West were drawing them into the European Union and possibly NATO. In November 2013, President Viktor Yanukovych (a Russian ally) refused to sign a treaty with EU, and demonstrations began in Maidan Square. Most international observers believe the demonstrations were instigated by the CIA working with neo-Nazis.

Putin was nervous. The Russian government had paid Paul Manafort millions to keep engineering elections in the Ukraine to insure their candidate would remain president. The government in Kiev had always respected the differences and the balance of power between Russians in the east and native Ukrainians in the west, but now Andriy Biletsky of Patriot of Ukraine, a Ukrainian extreme nationalist organization, promised to “lead the White Races of the world in a final crusade for their survival … against the Semite-led Untermenschen.” By February of 2014 he had 3,000 men in his Azov Battalion. With the support of the U.S. and Europe, Biletsky and his masked thugs locked Yanukovych out of all the government buildings. The government fell and Yanukovych fled to Russia.

Putin moved to get back his half of the Ukraine, the Crimea, and Russia’s one warm water naval seaport at Sebastopol—annexed in 1783 by Catherine the Great. He sent troops in to secure the area. A referendum held there on March 16 legitimized (once again) Russia’s annexation of the Crimea.

Now, Putin must have thought, it was time to get even. The CIA had taken over governments in Iran, Guatemala, Indonesia, Congo, Dominican Republic, South Vietnam, Brazil, Chile and the Ukraine, so, now, Putin, a former KGB agent, would try to take over the U.S. government.

When Putin has a problem that he doesn’t want to handle through official government channels, he turns to his cook, Yevgeniy Prigozhin.

This billionaire oligarch and right hand of Putin started out in St. Petersburg as a thug. In 1981 he was convicted of fraud, robbery and child prostitution and served nine years in prison. He got out and started a hot dog stand and eventually turned that into running fancy restaurants. Putin enjoyed his cooking and his company and made him a partner in some of his more delicate matters. Prigozhin was Putin’s proxy in big oil deals; he ran the covert operation that took over the Crimea before the plebiscite; he is running the military operation with mercenaries in Syria that are protecting oil fields for Assad; and he’s the money and brains behind the troll farm that worked to influence the 2016 election. He’s identified as the principal in Mueller’s indictment of the 13 Russians.

What did Putin expect to get out of all this?

He wanted some of the pressure taken off his annexation of the Crimea. That happened. It’s all accepted and everything is forgiven. And the world has moved on.

He wanted to restore Russian influence in the Middle East, and that’s happening. He is the dominant protector of Syria; Prigozhin has been bold enough to attack U.S. troops and our rebel allies for encroaching on Syrian oil. He’s made a separate peace with Iraq and Iran without U.S. involvement or interference, and he is quite openly negotiating with all the players in Afghanistan (the Shi’a minority, the Sunni government and the Taliban) to the exclusion of the U.S.

He wanted U.S. sanctions against Russia removed. He got ‘em. The Trump Administration has even refused to impose sanctions passed by Congress against Russian bankers saying they weren’t necessary.

He wanted to diminish the U.S. as a world power and that’s happened. Dropping out of the Paris Environmental Accords cut us off from world influence as a standard of sensibility. Dropping out of the Trans Pacific Partnership—an attempt to secure Asian markets without the influence of China—has opened Asian markets to China. Trump has damaged relations with our principal trading partners, Mexico and Canada. He has reduced nuanced diplomacy to schoolyard taunts. His insulting exchanges with Kim Jong Un have damaged U.S. stature and made Kim Jong Un look sensible and sympathetic. In a speech to the U.N. he said, “Rocket man is on a suicide mission for himself and for his regime.” The North Korean Ambassador to the U.N. replied: “If he was thinking he could scare us with the sound of a dog barking, that’s really a dog’s dream.”

The U.S. is widely seen throughout the world as the greatest threat to world peace. We have 1,000 bases in 80 countries. Previous administrations were able to maintain U.S. hegemony by arguments of moral persuasion and ethical standards. The world grudgingly let us be the World Cop. But Trump changed that. The U.S. is now seen as a bully defending gangsters and drug dealers. Worldwide resistance to U.S. aggression has limited the U.S. ability to act. The U.N. voted 129 to 9 to condemn the U.S. recognition of Jerusalem as the capital of Israel—an unprecedented and astonishing rebuke of U.S. power. We appear to the world as a stumbling, weak and ignorant giant, and the rest of the world is trying to restrain our worst impulses. This is an historic turning point in the evolution of the U.S. as a world power. Trump has precipitated our decline and fall.

But, after he is impeached for money laundering and obstruction of justice and driven from office, he should probably be given the Nobel Peace Prize for making the world a little bit safer by making the U.S. a lot less dangerous.