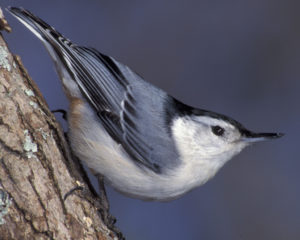 I have not written about birds for several months because there have been very few birds in the park lately. Hopefully there will be a big change soon—as always, we’ll have to wait and see.

Despite the absence of small (or song-) birds, there is still activity to report. A Cooper’s Hawk was high in a tree after some hassling by a few American Crows today (March 27) and 30-some Mallards were in and around a small bit of open water near the building. Two more were in a wet area at the opposite (west) end of the lake. There were at least four Canada Geese; sometimes there have been eight to 10 of them wandering or sitting on the ice. Also, two Ring-billed Gulls made a visit.

Because of the various rains and snows, I am predicting the muddiest, wettest spring in the park for years, but this could change drastically, up or down.

The backyard and other backyards, seem to be doing much better than the park with the usual Black-capped Chickadees, White-breasted Nuthatches, American Goldfinches, Hairy and Downy Woodpeckers, House Finches, Dark-eyed Juncos, Northern Cardinals and English Sparrows.

An American Robin even came by for a “heated bird bath” bath a couple of days ago, in the backyard. And I have heard the melodious spring song of the Northern Cardinal.

Without much more Powderhorn information, I will next recount our visit to the famous “International Festival of the Owls” in Houston; that is, in Houston, Minn., a very nice small town in southeastern Minnesota. Houston, about 20-plus miles south of Winona and less than 20 miles west of LaCrescent, is the home of the International Owl Center, and this was the 16th annual owl festival. Although we missed the Friday night Owl Prowl, on Saturday we heard a speaker from the World Bird Sanctuary who had brought a Eurasian Eagle Owl, a Great Horned Owl and a Barn Owl, all of which were paraded around the room for the audience to get a close-up view. At the Saturday night banquet, we met a couple from Ames, Iowa, a former mayor of Houston and his wife, and a sharp, local 93-year-old woman. In general, the event seemed to have a lot of local support. The evening speaker from South Africa talked about his project of getting young people involved in nature.

On Sunday, the executive director of the International Owl Center gave a presentation on the “soap opera” lives of the Great Horned owls in the area. She had names for the owls and had recorded their “hooting” sounds, commenting that to her trained ears, each one had a unique sound.

March 28. This just in! Robins have returned to the park, plus a Downy Woodpecker.