THE DISH: Lunch Around the World (Korean feast in Dinkytown) 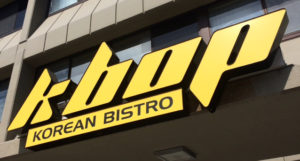 K Bop is a casual “Korean bistro” in Dinkytown, in the ground floor anchor spot of the Chateau apartment building on 13th Avenue. It’s more designed for foot and bicycle traffic, and not surprisingly, given its location, very popular with University of Minnesota students. The style of service is order at the counter, pay up front, and they call your number and you go back to the counter and pick up. They do have adequate and comfortable seating and customer restroom, though, so it’s more than just fast food or take-out. (You can also have it delivered via Door Dash if you live close enough.) The menu is pretty extensive and seems to cover most of the classic things you expect for Korean bistro food.

I was accompanied to a spur-of-the-moment lunch by Julie, my friend who is more familiar with Mexican food, living in Mexico half of the year. But she was keen to try this place. We had never been, and I had forgot to look up the address (it was spur-of-the-moment, after all) except for knowing it was in Dinkytown, so we decided to start at 4th Street and 12th Avenue and just drive gridwise through Dinkytown till we found it. Fortunately, it was a block away from where we started, and there was even a single available street parking spot. We liked the look of it, and spent a good while studying the photo menu on the wall. I grilled the counter staff on ingredients, history of K Bop, etc., although not thoroughly enough, as will be seen. Finally we settled on our choices. Julie had the Spicy Tofu Jorim and I had the Doenjang Chigae, with an appetizer of Kimchijeong (Kimchi pancake). These are all fairly typical Korean foods. Three other things Korean food is known for, at least in the U.S., are all available on the menu too: Kimbap, Bibimbap, and Bulgogi. (Note: the “bap” (rice) in kimbap and bibimbap is pronounced more like “bop,” hence the name of the bistro.) Kimbap is the Korean equivalent of a sushi roll. The main difference is that the protein filling is more often cooked than raw, instead of the other way around for a Japanese roll. A lot of the time it’s Spam. Bibimbap just means basically rice and vegetables. It’s served in an oversized bowl and I believe is the inspiration for all these “rice bowls” that proliferate in all manner of restaurants these days. There are optional meat choices in it, such as beef tips or boneless chicken strips, and it’s often served with a soft-cooked or sunny egg. Bulgogi is meat that is sliced very thin and marinated in a spicy sauce, then grilled. Traditionally it was beef, but pork or chicken is also available at K Bop. At other restaurants I have even seen tofu or seitan prepared “bulgogi” style.

The chigae (soups), entrees and lunch stews are all served with several small sides arranged around the main dish on a serving tray. These change seasonally and randomly and what we had was kimchi (I suspect that’s always on), a few kinds of house-made pickles, little strips of a rice-and-fish cake, plain white rice, and bean sprouts. The utensils available are a long handled soup spoon, a pair of chopsticks, or a fork, all in practical stainless steel. (I like that they don’t have disposables. Extra social responsibility points for that.) So on to the dishes themselves. Between the Doenjang Chigae and the Spicy Tofu Jorim, we both liked the spicy tofu dish better. It was more of a stew than a soup, and not oppressively spicy, but best of all, it was exactly as described on the menu. I cannot say the same for the Doenjang Chigae. It was described as tofu and clam in a fermented soybean paste broth with vegetables. Yes, it had those things, but! It also had shrimp. I guess the fact that other items were described as having “seafood” and this one said very specifically “clam” I didn’t think to ask, “Does it have shrimp in it?” Because I am mildly allergic to shrimp, but it had shrimp in it, and also squid and also lots of sliced jalapenos, which made it spicier in the end than the tofu dish which was described as spicy! (To be fair, the online version of the menu does say shrimp, clam and tofu. But still I think they should warn diners who order it, because lots of people have shrimp allergies.) The other things I didn’t especially like about this dish: It was still boiling actively when served to me, and it took several minutes for it to stop boiling and was still uncomfortably hot the whole time I struggled to eat it; and the clams were in their shells, which may I remind you were all floating in a boiling hot broth. I had no idea how to eat this. I tried. It wasn’t pretty. And yet I’m bound to say, the whole was better than its puzzling and dissonant parts, so I just took the two little shrimps out and I didn’t hate it. If you like miso, fishy broths, clams, soft tofu, jalapenos, and nappa, it was actually pretty tasty. Not as tasty as the Spicy Tofu Jorim, though.

But the real star to me was the Kimchijeon. I realized when I got my food I was going to be taking some of that home with me, because even though it was described as an appetizer, and cost only $6.50 (!) it was plenty alone for a lunch. And it was absolutely delish. Lovely dipping sauce too. A joy to eat, both there at the scene and later for a late supper, with my own improvised dipping sauce, a soft egg on top, and warmed in the tiny nuclear reactor I keep in my kitchen just for such necessities. I think if I go back for lunch, I might save money and have a Kimchijeon, which would be lovely with a nice cup of tea. Except they don’t seem to have tea. They also don’t have any sweets, or desserts, or any attempt to cater to those weird people who go to a national cuisine restaurant but want “regular” (i.e., their home country’s) food instead. (For instance: In the UK, almost all Chinese restaurants also serve fish and chips, and their chips, i.e., fries, are considered the best to be had.) I am not knocking that, but I thought you should know. In fact I quite admire it. As for the general lack of tea or any other house-made beverage on the menu (the photo menu just has pictures of various soft drinks along the bottom, like an afterthought) I think that it’s not the norm in cultures other than America to drink something with each meal, except for wine in the cultures that do that. Also, it seems that soups are a more common “main dish” in Korean culture than in most others, so probably even though a lot of tea is drunk, it’s drunk separately from the meal. K Bop is a place where you go to have a proper Korean lunch or dinner and no compromises. Dessert is for sissies—and Americans.