A meditation on Leonard Bernstein and South Minneapolis 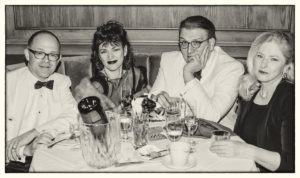 Like many of you, I’d imagine, this South Minneapolitan’s inner monologue is interrupted by frustrations. While ripping out invasive bellflower on the boulevard, giving a Paddington stare to the redlining commuters 10 feet away tearing down Park Avenue and wishing he had a rock to throw, thoughts careen from an overwhelming inspiration to change the world (that borders on hysteria), to a self-pitying powerlessness that withers in selfish and premature defeat. How on earth can he convince these impatient commuters that speed-plus-anger eventually leads to tragedy; or better yet, convince everyone to erase the boundaries that separate us, acknowledge each other’s dignity, and collaborate on something bigger and better than our individual desires?

Four years ago The Friends of the Saint Paul Public Library scheduled a lecture-concert on Kurt Weill and Bertolt Brecht songs. Pianist Dan Chouinard, singers Prudence Johnson and Diana Grasselli and Yours Truly were thrown together to do it. It was fun. It was also good. Susan Haas of Open Eye Figure Theater (in the Phillips neighborhood, at 24th St. and Portland) saw the performance and asked if we wanted to schedule a run of it there. We did. And it was, as they say, a hit.

The next year The Friends suggested a concert on French pop legend Jacques Brel, and again, Open Eye invited us for two weeks. It was another hit. We were on to something.

We were creating more than a concert. We added history, stories and quotes to put each song into a context that would illuminate it from the artist’s perspective: a meditation upon the artist’s angels and demons, triumphs and disappointments, loves and regrets told through songs and stories that had no intrinsic connection to one another. The audience response was that it seemed they were hearing Jacques Brel for the first time.

In 2016 we took on the year 1966. We conceived it as a radio broadcast day (a day that spanned the whole year), with songs, news, jingles, celebrity gossip and interviews and, unfortunately, eerily familiar reports of political unrest, police brutalities and racial injustices, unwanted wars and environmental disasters. Over 30 songs from that year ran the gamut from novelty pop to rock to South African political satire, Phil Ochs, Janis Ian. In the context of the show, they were more than pretty songs. Juxtaposed with the news around them, the cumulative effect exposed the deeper currents, the cautionary tales, the wisdom, the triumph of the human spirit over tragedy, all heard more keenly 50 years later. So much of what had inspired them had gone unchecked, unsolved and unacknowledged by us. Familiar songs heard again as if for the first time.

This year is the centenary of Leonard Bernstein: a composer (“West Side Story,” “Mass,” “Chichester Psalms,” the film score for “On the Waterfront”); a world-renowned conductor and pianist; an educator; a son and husband and father. His life is the subject of our August production at Open Eye, told through his music and the unbelievably rich correspondence he had with everyone who was famous in the 20th century. These letters are more than the “How-are-you-I-am-fine” updates, or clever and witty missives. The letters chronicle a Jewish, not-completely-discreetly gay, socially enlightened American (with an open file at the FBI) not only breaking through but dominating the elite cultural world of New York. That was something of a miracle in the 1950s. He was an artist and a social activist at the same time, a Renaissance man whose catalogue of work erased the boundaries separating “high” from “low” music, and the “high” and “low” American.

Dan, Prudence, Diana and I come from different disciplines in the performing arts, but those imaginary boundaries that feebly separate jazz and country and rock and classical and music-theater are erased when we perform together. On the contrary, collectively we are more inspired and more imaginative because we are from different performing worlds. And we’re better performers because of it. E pluribus unum is not just for the backs of coins. It’s the open-ended invitation to brighter possibilities we can’t imagine, much less realize, separately. And it can begin, so simply, with a collaboration you’d never think would work out so well. And then it does.
What does all that matter to the Central neighborhood homeowner, holding weeds in his clenched fist and this-close-to-throwing a rock? Nothing really. Until it suddenly does. And he’s looking at the world as if seeing it again for the first time.

A limited number of $10 Economic Accessibility tickets are available online. Pay as able at the door.