My thoughts on Keith Ellison 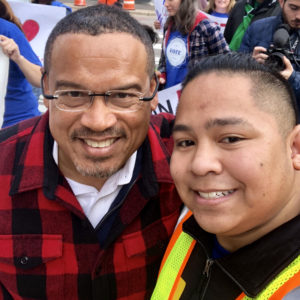 As a survivor of intimate partner violence and sexual assault (the #MeToo Movement), I take the allegations very seriously, and believing survivors isn’t an abstract idea for me. However, this election is not a referendum on whether we believe Karen, or the #MeToo Movement; this election is an opportunity to elect an attorney general who will stand up to big corporations, stand up for consumers, stand up for Minnesotans. Or it’s an opportunity to elect an attorney general who works for a hate group, an attorney general who has said he’ll work with Trump, the GOP legislature and the GOP party to make it harder for people of color, student, tribal members, the elderly and low wealth whites to vote. I am choosing to protect myself and the people I love by supporting the candidate who isn’t a bigot and who hasn’t spewed hate the entire campaign.

Folks that look like me, folks that are black, brown and indigenous will face attacks and criminalization.

Folks that pray like me will. Muslims and Jews have been the target of Former Rep. Wardlow.

Folks that love like me, queer folks, have already faced the vitriol of Former Rep. Wardlow.

Folks that come from countries like me will be under attack.

I didn’t hear the things I am saying from the mainstream media or some blog post, I heard it in my mosque last Friday, where Muslims are terrified about what happens when a Christian bigot takes over at the AGs Office. Will we be able to pray and worship? I heard it from my trans friend two days ago, when they were in tears because Doug Wardlow thinks they should be sterilized, unable to marry. I heard it from my Jewish friends this morning after people were killed while celebrating Sabbath, wondering if Doug Wardlow will protect them from right-wing terrorism. I heard it from some black and brown women in my life last week when they heard about Wardlow’s war on women. I don’t watch corporate media. I listen to my friends from marginalized communities.

The majority of folks I heard saying they’re not going to vote—they’re white, upperclass, straight and native born. It’s fine, for you to not vote for Keith Ellison because you’re going to be fine! But you’re giving a giant middle finger to your Muslim, queer, Jewish, POCI and immigrant neighbors. This race isn’t a purity test or morality issue. For us, it’s life or death. Please vote for Keith Ellison for attorney general to protect our future and our state!