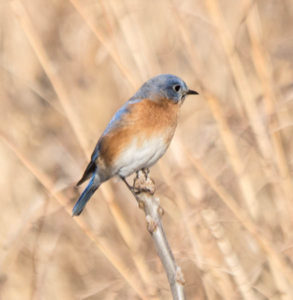 BY BONNIE RAE, ON BEHALF OF JOHN KARRIGAN

Bluebird
A good neighbor and frequent park walker reported seeing an Eastern Bluebird in the park in the middle of December and snapped a photo as proof! He also reported having recently seen a Cooper’s Hawk, as had another park walker, who also recently had seen an American Eagle in the park.

Seven turkeys along East River Parkway
On Wednesday (Jan. 2), I left U of M Hospital in the early afternoon and was heading south on East River Parkway when I saw a seven-member flock of Wild Turkeys. John has frequently seen these birds in this general area.

American Crows
At this time of year, American Crows gather in the mid- to late afternoon and descend on their communal roost. You may have noticed them flying generally northeasterly or northwesterly from the neighborhood, occasionally taking a break along the way in trees along the streets. In past years in South Minneapolis, they have claimed trees in Elliot Park and on the campus of Augburg University for their overnight roost. The other day I was driving north toward downtown and noticed them starting to gather in the trees around Children’s Hospital. Several trees held 40 to 60 Crows while the rest were flying above chaotically, albeit gracefully, before settling at the top of neighboring trees. If you’re driving in the area while this is going on, crack open your car window and listen to them, “Caaaw, caaaw.”

Comments and observations are always welcome. Send them to John Karrigan, in care of Southside Pride. Thank you.