No to engagement—Yes to shared power 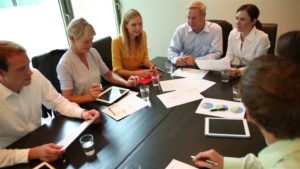 Engagement invites people to the table

Shared power gets people what they want to eat

A wall poster during the mass uprising in France in 1968 read, “You participate, she participates, I participate, they decide.” Malcolm X: “Just because you invite me to the table does not mean I get something to eat.” Being invited to the table is a cliché commonly used by government, foundations, nonprofit agencies and others when they invite involvement in their change initiatives from various stakeholders most affected by them, the intended beneficiaries, in neighborhoods. The word and concept used to describe this kind of top-down, institutionally-driven participation is engagement.

In contrast to the common definition of power as domination and control, I define power as “the capacity to produce intended results” that provides a basis for using power for transformational change without replicating oppression in other forms. In Minneapolis, a significant example of how engagement differs from shared power is the Neighborhood Revitalization Program (NRP) 1991-2011. As in most cities, Minneapolis’ public, philanthropic and business sectors are resistant to sharing decision-making power with city neighborhood stakeholders. This resistance was partially overcome in the NRP when neighborhoods had the power to share decision-making as partners with Minneapolis city government.

While formal resident participation programs were not a new idea in the late 1980s – 60% of U.S. cities had such programs – the NRP showed how autonomous neighborhood organizations could control the strategies and the use of funds for priorities determined by residents while local government primarily served as an advisor and provided technical assistance. During its 20 years of operation, the NRP allocated over $400 million to all 81 Minneapolis neighborhoods based on tax-increment financing, a funding mechanism that invested future property tax growth from downtown development to neighborhood revitalization and empowerment.

Unfortunately, Minneapolis city government decided power sharing was problematic, and the neighborhoods were not organized well enough to prevent the NRP from being “redesigned” into a program within the Minneapolis city coordinator’s department called Neighborhood and Community Relations (NCR). The purpose and limitations of the NCR is described in its tag-line, “When residents are informed, connected to their community and feel represented in city government, they are empowered to influence decisions that impact their lives.”

The redesign eliminated the NRP’s power sharing and replaced it with engagement in city initiatives, which according to the NCR, provides a “feeling of being represented in city government … to influence city decisions.” The redesign greatly increased ambiguity, which always diminishes accountability, in this particular case, by replacing the clarity of NRP shared decision-making “with a feeling of being represented.” Neighborhoods also became immersed in the diversions and illusions of engagement, which intentionally limit possibilities for change representing the desires and priorities of those most affected by change.

The replacement of the NRP with the NCR provides important lessons for neighborhood stakeholders who do not believe Minneapolis city government adequately understands their concerns or makes decisions based on what those most affected by them believe are their own priorities for neighborhood improvement. Perhaps the most obvious lesson is that engagement is limited to advising city elected officials and departments on decisions they retain full power to make. For example, after substantial engagement with stakeholders in all Minneapolis neighborhoods, which produced over a thousand suggestions for modifications: the 2040 Comprehensive Plan, many felt even their strongest recommended changes were simply ignored. Lesson: this will always result when city government restricts neighborhoods to engagement processes rather than sharing decision-making power.

Of course, this raises basic questions about governance and democracy: Should city government share decision-making power with its communities and neighborhoods? And, if so, in what ways and to what degrees? For those who believe city government should share decision-making power, as it did to some degree in the NRP, there are two basic factors which must be addressed: 1) Many in city government will strongly oppose and resist sharing power; and 2) Neighborhoods in Minneapolis are currently far from capable of organizing a citywide alliance to overcome this resistance. A citywide alliance also would be difficult to achieve because of the economics of dominance and self-interest within government, and government funding for nonprofit organizations to serve neighborhoods. Much of this fundingpays the salaries of management gatekeepers, a variety of professionals, and the wages of a significant number of city and nonprofit workers.

Organizing partnerships between city government and a citywide neighborhood alliance is the most likely effective strategy for establishing shared power. However, neighborhood stakeholders would have become far more powerful before inviting government to neighborhood tables. Among other things, forming an alliance would require: 1) Creating high levels of trust in its formation; 2) Addressing and resolving a variety of conflicts within diverse neighborhoods; 3) Agreeing on methods of limiting disruptive actions by those who are self-serving rather than working for a shared mission; 4) Deciding on the mission, goals and operating practices of the alliance; 5) Identifying and involving community-based organizations, such as nonprofit housing developers, which will support the neighborhood alliance; and 6) Securing adequately paid, skilled community empowerment organizers accountable to the partnership rather than accepting staffing support from city government.

Partnerships use a variety of operating practices, ranging from activity-driven and informal to goal-driven and highly organized. In goal-driven partnerships, the likelihood of achieving intended results is increased when the following questions are answered clearly: 1) Are the partnership’s mission and goals clear and created with the involvement and consent of all partners? 2) Does each goal have a working group of partners that create an action plan for achieving the goal? 3) Do the action plans include activities linked to specific partners for achieving the goal? 4) Do the action plans have useful indicators of progress toward goal achievement? 5) Does the partnership emphasize and insure the actions of all partners are based on mutual respect, mutual learning and mutual accountability for results.

To continue the conversation, Arthur Himmelman can be reached at ArthurTHimmelman@aol.com and www.HimmelmanConsulting.com.