A celebration of life 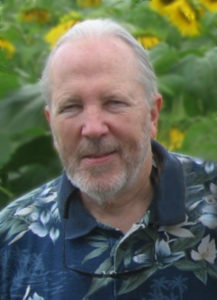 John R. Karrigan passed away peacefully on Jan. 11, 2019, at the age of 74, after a 10-month battle with metastatic melanoma. Preceded in death by his parents, Ellsworth and Vivien (Rasmussen) Karrigan, of Aberdeen, S.D. Survived by his longtime partner, Bonnie Rae; siblings Steve (Lynn) Karrigan and Dave Karrigan, Aberdeen; Nancy (Henry) Wong, Las Vegas; and other loving relatives & friends.

John graduated from Aberdeen Central High School in 1962. He was a quiet person and lifelong learner who enjoyed reading, current events and history.  He attended colleges in South Dakota, Arizona and Minnesota.

John sometimes told others that he was born on D-Day (June 5, 1944) while his dad was serving his country in Europe during WWII.

John was an avid birder and for many years wrote a monthly column for Southside Pride newspaper about birds, nature and the people of Powderhorn Park. He was an active volunteer for Advocating Change Together (ACT), a grassroots disability rights organization. He enjoyed sailing, car shows, drum & bugle corps competitions, local music, RV-ing and other travel, especially road trips.

Memorials are preferred to Advocating Change Together (ACT) or the Audubon Chapter of Minneapolis.

For those who’ve read Powderhorn Bird Watch forever (since 1992, first in a small Powderhorn paper and then in Southside Pride), it is not surprising that the bird man would want contributions to also go to the Audubon Society of Minnesota because of its work to protect the environment. The organization “works to conserve and restore natural ecosystems, focusing on birds and their habitats, for the benefit of humanity and the earth’s biological diversity. What is good for birds is good for people too including healthy habitats and clean water and air,” according to its website.

The pastor of Calvary Lutheran, Rev. Hans Lee, spoke about his friend Brett Hesla who worked with John for years to find the names of people buried in state hospital cemeteries throughout the state with nothing but numbers on simple markers. It was John and Brett’s mission to put proper tombstones with names and dates on graves of forgotten souls.

Several people commented on John’s sense of humor, which his readers undoubtedly noticed. If you asked him what he did for a living, he’d say something about running guns or drugs, since he often had a job driving cars from one location to another.

Publisher and editor-in-chief of Southside Pride, Ed Felien, referred to the “always elusive John Karrigan.” They didn’t know each other well. Felien said, “I only met him a couple of times, once while walking around Powderhorn Lake. His writing epitomized a self-ironic honesty that seems to represent Powderhorn.  I always admired that. I always felt John’s column was the most popular, but there’s no way to verify something like that.  I did nominate him once for a Premack Award, U of M Journalism School annual awards.”

Getting the Bird Watch column at the newspaper, and getting it ready for publication, was a special event. Bonnie Rae would type it and send it and worry about errors, which were basically nonexistent. John had a unique syntax that was fun to work with and always a couple of funny/droll comments sprinkled throughout. Our art director, who does the layout, Ashley Pederson, and I enjoyed inventing headlines, and Ashley delighted in finding just the right photo.

Thank you, John, for your steady, behind-the-scenes work (and play) that made the world a better place. Our deepest condolences to Bonnie Rae and to John’s siblings and cousins. 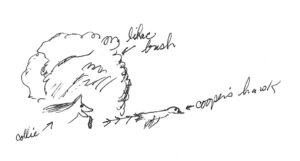 Fan letter to John received at the newspaper sometime in January

Thought you might like the story of a cooper’s hawk who hunts in my backyard and my big collie. I was on my back deck and suddenly a cooper’s hawk came shooting out from under the big lilac bush (it was summer) with my collie right on his tail. The hawk was really moving fast!

My collie had one tail feather in her mouth. I’ll bet the hawk was thinking “I thought they got rid of all the wolves around here!”

I did not know hawks hunted on the ground.

Thank you for writing your bird watching column all these years! Hope you feel better soon!