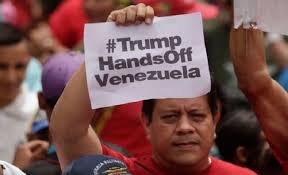 Twin Cities area peace and anti-war groups are organizing a Minneapolis protest on Saturday, Feb. 23, as part of a day of local actions around the U.S. opposing U.S. intervention in Venezuela.

The Minneapolis event will gather on Feb. 23 at 1 p.m. at Hennepin & Lagoon Avenues in the Uptown neighborhood of Minneapolis. There will be signs and banners with the anti-intervention message.
The event is called under the themes: U.S. Hands Off Venezuela–No Coup; No Sanctions– No U.S. War on Venezuela!

A statement issued by organizers says in part, “The Trump administration is attempting to orchestrate a coup in Venezuela, including threats of direct U.S. military intervention. Venezuela has one of the largest oil reserves in the world and the second largest gold reserves, as well as diamonds and other minerals, resources that could make it the next target in the endless series of U.S. wars, interventions and “regime change” operations. Join the February 23 protest to say NO to new wars and interventions.”

Planning for the event was initiated by Minnesota Peace Action Coalition and endorsed by a range of groups including Anti-War Committee, Veterans for Peace and Women Against Military Madness.