“Purple Rain” is the kind of song that makes you stop what you are doing and invokes you to sing along and sway to the epic creation.
Prince sang the song during the 2007 Super Bowl while it magically rained, making both the stage and the singer glisten. “Purple Rain” may even be considered a Twin Cities anthem because Prince truly was ours. “Purple Rain” is also the song that inspired Twin Cities visual artist Esther Osayande, a Phillips neighborhood resident, to create the Purple Raindrop sculpture in North Minneapolis. Osayande, along with two other artists, Christopheraaron Deanes and Christopher E. Harrison, was selected by a panel of community members, arts experts, city staff, and other key stakeholders to create artwork along the newly built 26th Avenue North bike path. The artwork serves as a way to connect the Northside community through sparking meaningful conversations and also providing tangible meeting spots in the area.
The inspiration for the raindrop came to Osayande a couple of weeks after Prince’s passing. While she was in downtown Minneapolis, she heard “Purple Rain” being blasted from First Avenue. With the iconic song pulsating through the downtown streets, Osayande felt like it was a “divine intervention,” leading her in the direction of creating the raindrop. Purple Raindrop now stands gloriously and proudly in Farview Park in North Minneapolis honoring both Prince (the onetime resident of North Minneapolis) and the neighborhood.
Completion of the raindrop was an all-women effort. Osayande designed the curving, flawless sculpture and chose the vibrant purple shade. Two female Twin Cities welders, Denise ‘Seven’ Bailey and Heather Doyle, then constructed the raindrop. Osayande feels like, “It’s the year of the woman,” reflecting on how at one time, women would never have been thought able to do a job like being a welder.
Osayande also greatly admired Prince, describing him as someone who believed in peace and getting along with one another. And prior to his fame, Osayande had met the singer. At the time, she was dating someone who was friends with a musician in a band Prince was putting together. She recalls how the young, about 18-year-old Prince quietly and shyly entered her home, politely asking her how she was and saying how it was nice to meet her. “I had greatness in my house,” says Osayande.
As Prince said, “Music was put on earth to enlighten and empower us and feel closer to our center.” This quote could also apply to Osayande’s artwork, stirring up a similar sentiment as you ponder the beauty and intrigue while also feeling a sense of strength and hope in her work. 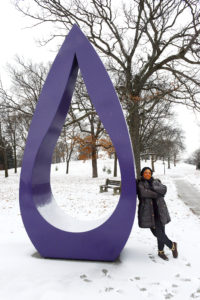