The Gichi-gami Gathering to Stop Line 3 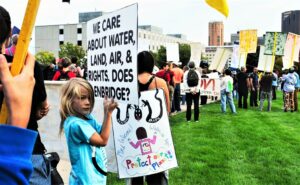 Now is the time to gather on the shores of Gichi-gami—Lake Superior—and raise our voices so that Governor Walz, our state agencies, and all Minnesotans can hear. This gathering, titled The Gichi-gami Gathering to Stop Line 3, will be held in Duluth on Sept. 28 from 1 p.m. to 6 p.m. Anyone who is opposed to Line 3 or interested in learning about the fight against this oil pipeline should consider attending.
Line 3 is not a replacement for old Line 3, as claimed by Enbridge Energy, the company that wants to build it. It is a major new pipeline that would be used to carry tar sands oil—the world’s dirtiest oil—from Canada to Superior, Wis., crossing Ojibwe treaty land, wild rice lakes, and the headwaters of the Mississippi River. Enbridge does not have all the permits they need to start construction, and there has been a ruling that found the Environmental Impact Study for the line didn’t even study the spill risks to Lake Superior. The environmental damage from burning the dirty tar sands oil that would flow through this pipeline would be equal to the pollution from 50 coal-fueled power plants.
Enbridge spent $11 million on lobbying for Line 3. A big effort by those against this line has stopped the line from being built up to this point. The Gichi-gami Gathering is being held in an effort to keep up and expand the public opposition to Line 3.
The event starts at Lake Place Park, at 214 E. Superior St., with a rally, followed by a march, and ends with a family-friendly festival. For more information and updates go to the Facebook event page at Gichi-gami Gathering to Stop Line 3 or go to www.gichi-gami-gathering.com. Here’s a direct link to register for the bus. It’s $40 or pay what you can. https://www.gichi-gami-gathering.com/transportation.
People who are concerned about the great damage this pipeline would do to our environment and the impact it would have on our climate should think about joining the gathering in Duluth (55802) on Saturday, Sept. 28, from 1 to 6 p.m.