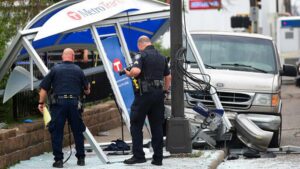 According to people who have viewed video footage, George R. Jensen deliberately drove his van into a bus shelter in North Minneapolis and injured six African Americans waiting for a bus on July 9.

There is a Race War happening in America.
Some very crazy white people are attacking and murdering people of color.
Dylann Roof killed nine African Americans during a church service at Emanuel African Methodist Episcopal Church in 2015. White supremacist James Fields deliberately rammed his car into a crowd of demonstrators protesting the Unite the Right rally in Charlottesville in 2017, killing Heather Heyer. According to the Anti-Defamation League, white supremacists have killed 73 people since Charlottesville, culminating in 22 people being killed in El Paso by a white supremacist trying to stop the “Mexican invasion.”
On July 9, George R. Jensen drove around the bus stop on Broadway and Lyndale in North Minneapolis, and, according to the criminal complaint, stopped, tried to talk to women, offered them money (presumably for prostitution), but none were interested. Then he positioned his car in the bus zone and drove it straight into the bus shelter, injuring six people. One person had multiple pelvic fractures, fractured ribs and vertebra, and another had fractured ribs, a spleen laceration, broken legs, a scalp cut and a bruised lung.
County Attorney Mike Freeman said Jensen will be charged with five counts of criminal vehicular operation.
Minnesota Statute 609.2113: CRIMINAL VEHICULAR OPERATION; BODILY HARM. Subdivision 1. Great bodily harm. A person is guilty of criminal vehicular operation resulting in great bodily harm and may be sentenced to imprisonment for not more than five years or to payment of a fine of not more than $10,000, or both, if the person causes great bodily harm to another not constituting attempted murder or assault as a result of operating a motor vehicle in a grossly negligent manner.
Freeman doesn’t think Jensen will do time. He’s not even confident he can get a conviction. Jensen is 83. He has no criminal record.
Longtime leaders in the Civil Rights Movement in North Minneapolis called a news conference to respond to Freeman’s decision. Radio personality Ron Edwards; Spike Moss, formerly the Director of The Way; Ora Hokes, head of the local NAACP; and Tyrone Tirrell, president of the African-American Leadership Council, threatened to appeal Freeman’s decision to the Minnesota Supreme Court. Terrill asked, “What does it take to be charged with a hate crime? That car is no different from a gun.”
Assault is any attempt or action that causes physical harm to another person. In Minnesota, there are five categories, or degrees, of assault, all of which take into account the extent of the injuries and the type of weapon used:
Fifth—No weapon used, no serious bodily injury.
Fourth—A special classification used to protect police and medical personnel. No weapon, no serious injury.
Third—An attack that caused substantial injuries, an assault against a minor with whom the accused has a history of abuse, or assault on someone under the age of four.
Second—If the accused used a potentially dangerous weapon, the prosecutor can make the charge of Second Degree Assault, even if there was no serious injury.
First—Any assault that results in “great bodily harm,” a condition that causes permanent disfigurement, risk of death or damages internal organs.
If it could be proven beyond a reasonable doubt that Jensen knew the women he struck with his car, and if it could be proven that there was a failed business transaction between the victims and Jensen immediately prior to the incident, then it seems likely that Jensen acted with malice aforethought, and committed at least First Degree Assault, if not Attempted Murder, someone who attempts to cause “the death of a human being with premeditation and with intent.”
An aggressive county attorney would have charged Jensen with attempted murder. A county attorney who understood that some crazy white people are running around killing people of color because they think they are saving the white race would have sent sheriff’s deputies to Jensen’s home with search warrants to see if he had white nationalist and racist literature and communications to corroborate “intent.”
But none of that happened. Jensen is not in custody. Any incriminating evidence would by now be destroyed.
Still, it is a small step forward from where Freeman was at five years ago when he declined to file felony charges against Jeffrey Rice for driving through a crowd demonstrating against the police murder in Ferguson, Missouri.
But it is a tragic mistake to think that by not talking about some crazy white people wanting to start a race war you will make it go away. It won’t go away until it is publicly exposed and struggled against.
U.S. Attorney Justin Herdman, after arresting a white nationalist for threatening a synagogue in Ohio, said: “Threatening to kill Jewish people, gunning down innocent Latinos on a weekend shopping trip, planning and plotting to perpetrate murders in the name of a nonsense racial theory, sitting to pray with God-fearing people who you execute moments later—those actions don’t make you soldiers, they make you criminals. Law enforcement doesn’t go to war with cowards who break the law, we arrest them and send them to prison.”
By not prosecuting white nationalist terrorists to the fullest extent of the law, the county attorney is neglecting his responsibility to care for the welfare of our communities of color.
We can do better than that.