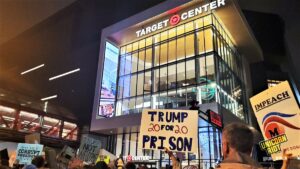 Thousands of people showed up at the Target Center in downtown Minneapolis to tell our President, in the words of Mayor Frey, “Love Trumps Hate in Minneapolis.”
The demonstrators were peaceful but determined. They stayed past midnight. There were minor confrontations and scuffles, but no one was seriously hurt.
Some demonstrator pulled off a MAGA hat from someone. They struggled and the person got his hat back. Some protesters set a small bonfire of Trump hats and signs. A reporter from Unicorn Riot, which did an excellent job filming and narrating the full demonstration, was sprayed by an MPD cop with mace for no other reason than that he was standing with demonstrators. A couple of guys on motorcycles tried to drive through the demonstrators, but they were stopped by the police. A couple of guys with guns from Oath Keepers were kept away from the demonstrators by the MPD.
Oath Keepers are an interesting group. The Southern Poverty Law Center describes the Oath Keepers as “one of the largest radical anti-government groups in the U.S. today.”
Newsweek:
“On the group’s website, it describes itself as a ‘non-partisan association of current and formerly serving military, police, and first responders, who pledge to fulfill the oath all military and police take to “defend the Constitution against all enemies, foreign and domestic.” ’
“The Oath Keepers posted an alert on their site on Saturday stating volunteers were needed to ‘protect Trump supporters’ at Trump’s rally.
‘The violent communists of Antifa have issued a national call to action for Antifa and other radical, America-hating leftists to converge on the upcoming Trump rally in Minneapolis on Oct. 10 to “disrupt” the Trump rally with an Antifa black block “America is Canceled” protest against capitalism,’ the alert states. ‘We also expect trouble from the same radical leftists in Minneapolis that assaulted Trump supporters in 2016,’ [the alert continued].”
These Oath Keepers are the same kind of people who formed the Brown Shirts, the SA, that provoked violence in Germany in the 1930s that allowed Hitler to eliminate opposition and “restore order.”
Casey Michel of the Daily Beast said, “When President Donald Trump lobbed the threat of civil war on Twitter late last month, he became the first sitting president to ever hint at potential fratricide if he’s removed via impeachment—an implication as deafening as it was disgusting.
“Stewart Rhodes, though, had a different take. For those unfamiliar, Rhodes is the gruff head of the Oath Keepers—a militia made up largely of current and former law enforcement officials and military veterans, perhaps best known for the all-white contingent it sent to provide “security” for a rally in Ferguson in 2015. Now, the Oath Keepers are calling for volunteers to protect Trump supporters—including at the president’s rally Thursday evening in Minnesota. The Oath Keepers are itching for a civil war. Stewart Rhodes is ready to protect Trump, no matter what, and to fight a HOT war.”
Perhaps Marco I. Dávila C. summed it up best:
“On the night of Thursday, the 10th of October, Donald Trump will be in Target Center in downtown Minneapolis, Minnesota, which, in part, will occur beneath the slogan ‘Keep America Great,’ a continuation of ‘Make America Great Again.’ At the same time thousands of demonstrators will protest, saying to Trump: ‘You are not welcome!’
“In the center of the city of lakes the two camps will rally, or in other words, both ‘Americas’ will be found: the America that, in its time, supported slavery, and was even ready to go to war to defend that inhuman and oppressive economic system, and the noble America that fought together with African Americans for their civil rights; the conservative America that wants everything for the white and the most privileged, and the progressive America that seeks to be more inclusive towards all the races that live here; the America that accuses Mexicans of being ‘rapists’ and the understanding America, that proposes that we look for the causes of immigration; the America that discriminates against minorities, and the America that treats all inhabitants equally; the xenophobic America, and the America that is indignant in the face of intolerance; the America of Trump and ‘grab them by the pussy,’ and the America of the mayor of Minneapolis, ‘If you see hate, counter it with love.’
“I join the call of the majority of the inhabitants of the city of Minneapolis who today, express themselves and say: Trump is not welcome!”