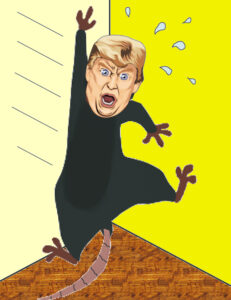 The walls are closing in on you.
Everybody knows your game.
It’s all coming out now, your connections to the Russian Mob. How they bought condos at Trump Tower and had them repossessed by the feds for money laundering. How they gave you tons of money when no bank would lend you anything. How they bailed out your bankrupt casinos. How you became their American brother. They had omerta, loyalty, to you and you to them.
And everyone knows the Russian Mob is an agency of the Russian government, in much the same way the CIA has been working with the Sicilian Mob ever since they sprang Lucky Luciano from federal prison to help with the invasion of Sicily in 1943.
The big money in a Mob is selling drugs. The Iran-Contra Affair illustrates perfectly the smooth connection between the U.S. government and the Mob. George H. W. Bush and Ollie North cooked up a scheme in the basement of the White House to get around Congress’s prohibition on selling arms to the Contras in Nicaragua. The Contras shipped cocaine from Honduras to a CIA air base in Florida. The Mafia bought it for the U.S. market, and the money went to Iran to buy weapons that went to the Contras. It was a neat triangle. It should really be called the Iran-Contra-Mafia-CIA Affair to give credit to all the players.
The money that powers the Russian Mob comes from heroin, and that heroin comes from Afghanistan.
Everyone knows you’ve been using the U.S. military to deal opium out of Afghanistan. You had the U.S. Army protect trucks driving it to Pakistan to be turned into heroin and then drove the heroin back across Afghanistan to Turkmenistan to the Russian Mob who took it to Europe and the streets of New York City. It’s a $5 billion-a-year racket in Afghanistan. That’s why Michael Flynn was your first hire, and that’s why you made him your national intelligence director.
He knew the territory. He was head of U.S. Army Intelligence in Afghanistan. His primary responsibility was to protect the opium crop from the Taliban who wanted to destroy it. He knew how to protect the convoys of contraband. He was at state dinners in Moscow, sitting with Putin. He had to quit after 24 days because he got caught lying about his Russian contacts to Vice President Pence. [Is Pence that far out of the loop that he really doesn’t know what’s going on?]
When Hamid Karzai refused to play ball with you and cut you into the $5 billion pot of honey, you dropped the MOAB (Massive Ordnance Air Blast, commonly known as “Mother of All Bombs”) in his backyard in April of 2017. It was such a Mob thing to do—blow out his shop to sell him protection. Karzai shrieked to Al Jazeera, Afghanistan should not be used as a “testing ground” for weapons. He’s quieted down lately, so he must have begun to appreciate the value of U.S. military protection.
John Bolton knew what was going on. He resigned after telling Fiona Hill, “I don’t want to be part of that Ukraine drug deal.”
What was that “Ukraine drug deal”?
Isn’t the “Ukraine meddling in the 2016 Elections” just a smoke-screen?
Wasn’t the Ukraine drug deal when the Mob Boss, Putin, put the pressure on you to put some pressure on Zelensky to sit down with the Kremlin Crime Boss and make a deal about Crimea?
You know, all this is becoming common knowledge, and eventually you will be tried for treason for betraying your country.
Let’s make a deal.
You plead guilty now and you get to keep Mar-a-Lago, or rather, we get to keep Mar-a-Lago, and we keep you in there. You can have your old room, run of the place, your golf course, your old golf cart. And you can have visitors, and even conjugal visits. We’ll turn it into a federal prison palace. We will screen all your visitors because we’ll be protecting you from vengeance from the Mob.
You’ll love it. You’ll be safe and still be the center of attention.
And you’ll be a hero for sparing the country a painful ordeal.
This is a good deal for you.
We’re giving you respect. We’re giving you a decent place in history. People will love you for it. People will remember you for hundreds of years. Everybody loves a story about a redeemed thief. You’ll be a greater president than George Washington.
Consider it an early retirement with full benefits and lasting immortality.
If you keep acting like you’re going to get away with it forever, then, when the crash comes, when everyone finally figures out what went on, you’re going to hate it.
Get out now and let everybody love you. 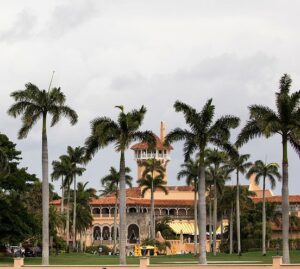 Mar-a-Lago: it already has a guard tower!