Minneapolis joins with cities nationally to say NO to U.S. wars in Iran and Iraq 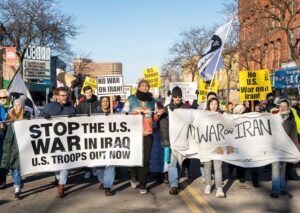 On Jan. 4, over 700 people took to the streets of the West Bank in Minneapolis to protest the Trump administration’s attempt to provoke a new war with Iran by assassinating Qassem Soleimani, a top Iranian military leader, and by sending more troops, further prolonging the U.S. occupation in Iraq.
The protest was a part of the ANSWER (Act Now to Stop War and End Racism) coalition’s call for national protests on Jan. 4. Over 50 cities in the U.S. had protests that day, including actions in New York City, Chicago, Los Angeles and Washington, D.C. The Minneapolis protest was one of the largest in the country.
Wyatt Miller, an activist with the Anti-War Committee, was the first to address the crowd: “Iran didn’t destabilize Iraq, the U.S. did! And when Iraqi people try to protect their homes and fight back against U.S. occupation forces, ultimately that’s not Iran’s fault, that’s not Qassem Soleimani’s fault, that’s the fault of there being an ILLEGAL, UNJUST U.S. occupation in the first place! The blood of millions of Iraqis is on the hands of Bush, Cheney, Obama, Clinton, Biden AND Trump.”
He continued: “Entire generations of Iraqis have now seen their country destroyed multiple times. We have a moral duty to stop this from happening, not to Iraq (again), not to Afghanistan (again), and not to Iran, not to Venezuela, not to Nicaragua, not to ANYWHERE.
“I truly believe that the U.S. military and the imperialist system it enforces is the greatest obstacle to the progress of humanity. And that includes people fighting for freedom inside U.S. borders, too.”
The protest was organized by the MN Peace Action Coalition, the Anti-War Committee and Women Against Military Madness. Organizers expect that there will be future days of national action and more local and national protests to stop the growing drum beats for war within the Trump administration.