The Riverview Theater Presents Screening of The Doors: Break on Thru 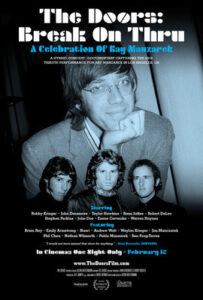 This one-time screening of a one-of-a-kind film about a unique musician and a legendary band is another in a series of special events hosted in recent years by the Riverview Theater. “We’ve done several music-concert documentaries, such as Coldplay, David Gilmour, the Grateful Dead, and Roger Waters,” said Loren Williams, longtime owner of the Riverview. “Seeing a film like this one in a large auditorium with great sound, along with other fans, makes it a real event.”
The Doors, one of the most influential and controversial bands of the 1960s, were born, as the story goes, when Jim Morrison met Ray Manzarek on Venice Beach in 1965. In addition to lead singer Morrison and keyboardist Manzarek, The Doors included guitarist Robby Krieger and drummer John Densmore. “The Doors: Break On Thru — A Celebration of Ray Manzarek” is a concert documentary of a 2016 all-star performance in Los Angeles that Densmore and Krieger, the band’s two surviving members, developed to celebrate what would have been Manzarek’s 70th birthday. In addition to the concert, the film includes rare footage from The Doors archives and fresh interviews from Densmore and Krieger. As architect of the band’s famous keyboard sound, Manzarek has been called the heart of The Doors. The setlist from the concert consists of Doors songs and includes a cast of guest musicians including, among others, Taylor Hawkins and Rami Jaffee (Foo Fighters), Robert DeLeo (Stone Temple Pilots), Stephen Perkins (Jane’s Addiction), Exene and John Doe (X), Warren Haynes (Gov’t Mule), Brian Ray (Paul McCartney), and Andrew Watt. The film also features rare archival footage of the band, and conversations with Morrison and Manzarek.