As we enter a new decade, Australia is burning, and in Minneapolis two fires killed residents in affordable housing units in recent months.
While bush fires are a common occurrence in Australia, climate scientists have long warned that fires would get worse and here we are. The Australian government has been criticized for not being more proactive about climate change and maintaining its dependence on coal even in the face of the catastrophic fires. The scale and horror of the fires have jolted many to awareness of the future we have cooked for ourselves, but those in power cling to business as usual.
The Australian bush fires have displaced thousands of people, even trapping 4,000 people on the beach in Mallacoota as the new decade dawned. As of Jan. 13, around 2,000 homes had been destroyed. Even those living in cities that are “safe” are experiencing severe air quality issues, “Kristy McBain … instructed those who flee to come here to Canberra. … Meanwhile, I have taped up every door and many of the windows of our house, but it still smells like smoke in every room. … ‘Australia’s present is the world’s future. Global warming continues, and it’s terrifying.’ “ (https://theintercept.com/2020/01/01/banality-apocalypse-australian-fire/)
Meanwhile, in Minneapolis, two fires struck affordable housing options within a month of one another. The first, a fire that killed 5 and made at least 9 units uninhabitable, struck just before Thanksgiving. The second, luckily, saw no fatalities but displaced about 250 homeless people on Christmas Day. Fortunately, the displaced, who included families with children, were connected with new housing options within days of the fire.
A major factor in the devastation of these fires was the lack of sprinkler systems in these buildings. While these buildings were built before sprinkler systems were required by code, this is a pathetic excuse when you consider that “The St. Paul Public Housing Agency began installing sprinklers in high-rises in the late 1990s and completed the work in those 16 buildings by 2013, said Louise Seeba, PHA deputy executive director and general counsel. Between the sprinklers and the fire alarm systems being replaced, the cost was $8.3 million.” (https://www.twincities.com/2019/11/29/in-minneapolis-fire-that-killed-5-apartment-building-was-too-old-to-require-sprinklers-whats-the-situation-in-st-paul-high-rises/). To put that in perspective, U.S. Bank Stadium cost state and local tax payers nearly $500 million dollars and Minneapolis pays an additional $7.5 million each year for operations and maintenance.
In Minneapolis we are failing to house all of our residents with a basic level of safety and security. Our city government needs to start taking real action to house our homeless, maintain and create more truly affordable housing, and examine the resilience of our infrastructure for an ever-closer climate change future. If we can’t house all of our people now, what chaos is possible when climate refugees begin fleeing an East Coast under water or a West Coast ravaged by fire and drought?
Some might say that the best way forward is to tear all the old outdated buildings down and build new ones. But how can we trust the city with shiny new toys when they destroy what they currently have through negligence? Especially when much of the new construction is “five-over-one” balloon frame buildings with five stories of apartments over a ground-floor “podium” of parking and/or retail. This type of construction is highly flammable and presents other potential fire safety problems.
We need to invest money and time into making sure that all of our buildings are as safe as possible, whether they are historic or new construction. As we ensure fire safety, we would also benefit from analyzing the resilience of our buildings within the framework of potential catastrophic climate change. It might not be the easiest or most profitable thing to do, but it will save lives. 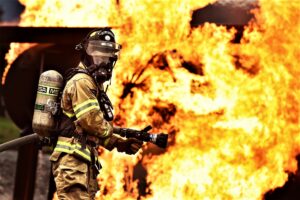