Sen. Susan Collins justified her vote by stating that the president had learned a “pretty big lesson” from impeachment and that he would be “much more cautious in the future.”
City Council President Lisa Bender said, “I think our policy changes in the police department, leadership changes, have really created a scenario where this is unlikely to happen again, so I think it’s time to move forward and really continue with the changes that we’re making in the police department to make sure this never happens again.” 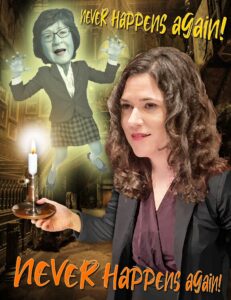 Is it déjà vu all over again?
Is Lisa Bender fooling herself about the Minneapolis police learning a lesson just like Susan Collins is fooling herself about Trump?
The City of Minneapolis has agreed to settle with the family of Terrance Franklin. “We have agreed to pay them $795,000 to prevent a Wrongful Death suit from coming to trial.” The city agreed to settle because they knew they’d lose at trial. They knew the officers involved in killing Terrance Franklin lied about what happened. The Franklin family attorney said, “The contention that this young man grabbed a gun and shot two police officers was something that we vehemently opposed, from practically the beginning, once we had the evidence.”
For a summary and analysis of the 200-page MPD Report and the medical examiner’s report go to https://southsidepride.com/2013/10/29/how-did-they-kill-terrance-franklin-2/.
Officer Meath was operating the machine gun pistol that killed Franklin and injured two officers. Officer Peterson operated the handgun that was used to shoot Franklin in the head (probably after he was already dead).
Fight Back News reported on May 12, 2018: “Minneapolis police officers Michael Meath and Lucas Peterson have 19 excessive force complaints combined—no discipline on any of them. Lucas Peterson has had 13 excessive force complaints against him since he joined MPD in 2000, costing over $700,000 in settlements. Peterson murdered another Black person, Christopher Burns, on Nov. 1, 2002. Peterson was also on the defunct Metro Gang Strike Force (MGSF) in 2006 and was one of the officers investigated in 2009 when the state shut down the MGSF for corruption including improper searches, seizing property without authorization (often kept for personal use or sold), and injuries to people who were not suspects. The MGSF cost the state $3 million in settlements with victims of their misconduct.”
Why haven’t Meath and Peterson been disciplined? Why haven’t these officers been held accountable?
Former Minneapolis Police Chief Tony Bouza asked me, “Why should the city be responsible for the settlement? If you run a private business, and you hire someone, and he goes off and kills someone, why are you responsible? The person was not acting on your behalf. They were acting on their own. They’re responsible for their own actions.”
I met Chief Arradondo at a community meeting a couple of summers ago. I asked him about disciplining officers involved in the Terrance Franklin killing. He said, “Make an appointment and come down and see me and we’ll talk about it.”
I called, made an appointment, showed up, and he came out of the office and shook my hand and walked out the door saying, “I’ll be right back.” Of course, he had no intention of being right back. I knew that. I waited for almost an hour and left.
If the mayor (who is responsible for the chief of police) and the city council refuse to accept responsibility for disciplining these officers, then they must be held accountable in city elections next year.
Further, changes must be made to the procedures for investigating a police shooting. If a group of civilians had followed Terrance Franklin down a basement in South Minneapolis and beat and killed him, then police investigators would immediately separate the individuals in the group and take statements from them. When members of the MPD are involved in a death, they are allowed 48 hours to talk to each other and get their stories straight before making a statement.
There are some very rotten apples in the MPD, and they are spoiling the barrel and they are spoiling the trust necessary for them “To Protect and Serve” all the people in Minneapolis.
It’s no longer possible for people of conscience (in the words of Lisa Bender and the delusions of Susan Collins) to “move forward” and pretend it’s all going to get better.
Postscript: I wrote the following to Alondra Cano, chair of the Public Safety and Emergency Management Committee of the Minneapolis City Council, who is charged with the responsibility to oversee the operation of the Minneapolis Police Department, before their meeting on Feb. 19, with copies to the other members of the committee: Andrea Jenkins; Steve Fletcher; Linea Palmisano; Phillipe Cunningham; Jeremiah Ellison:
“Chair Cano,
“Will Officers Meath and Peterson be held accountable to the City of Minneapolis for the wrongful death of Terrance Franklin?”