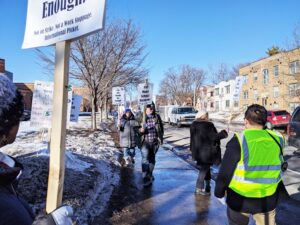 Whew! I hardly know where to start. On March 10, a coalition of pissed-off parents marched to demand Minneapolis Public Schools (MPS) go back to the drawing board on their Comprehensive District Design (CDD) and this time consult meaningfully and in advance with the community, especially parents. Meanwhile “ESPs” (Education Support Professionals) are still in contract negotiations after more than nine months and numerous informational pickets.
In other news, the Saint Paul teachers’ union, SPFE #28, ended its three-day strike after reaching a contract agreement on March 13. More on that below. 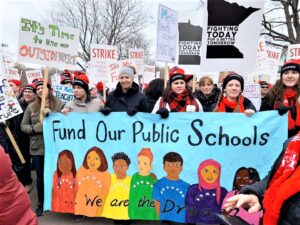 I managed to attend an informational picket of the ESPs (they’re what used to be called paraprofessionals) at Lucy Laney School. There seemed to be a lot of public support for the union, with both foot traffic cheering and passing drivers honking in support. I eavesdropped as Shaun Laden, president of the MFT 59 ESP Chapter, the union involved, gave a brief interview to a video journalist, and then I asked him if I could take a few photos, which he gave permission for. ESPs in the Minneapolis system are absolutely vital, performing such essential jobs as special education assistant, interpreter, physical therapist assistant, childcare assistant, and many more. Pay for most ESPs is in the low 20K to low 30K range, and yet they pay the same amount for health care premiums as colleagues making over $100K. About two thirds of ESPs are working second or even third jobs just to survive. (One of their two picket signs carries the slogan “One Job Ought To Be Enough!”) Many qualify for benefits, and some are even housing insecure or homeless. MPS struggles to retain ESPs and are always short-staffed (duh!). And yet, the past two 2-year contracts have included step-freezes (where employees cannot move up to the next pay level despite time in the role) and zero to 2% wage increases overall. The union has not called for a strike authorization vote yet, but something clearly has to give. You can get more detailed and up-to-date information on the union’s website. Go to https://www.mft59.org/esp-chapter. 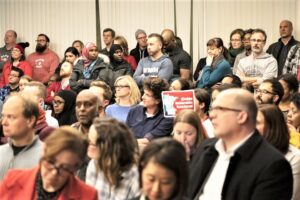 Like the punishingly austere contracts with ESPs, the contents, if not the motivation, of the new redesign of the MPS district is driven by shrinking revenue and increasing external costs. Of course, this is a vicious cycle. As the leaflet handed out by picketing ESPs rather obviously states, poverty wages lead to staff shortages and low morale. Deficiencies in the workforce (teacher “churn” included) lead concerned parents to withdraw their kids from the system, and this leads to further loss of revenues. And so it goes. Sadly, between the lofty rhetoric of the reason behind the CDD and the meagerness of the actual offerings to decide between, there is a great chasm. This is caused by—yep—lack of revenue.
The impetus behind the CDD is laid out as a needed correction to years of policy that have widened the racial achievement gap. The language is unassailable, in my opinion:
“We fundamentally believe that continuing to do nothing … and maintaining the status quo is unacceptable. Closing the achievement gap at Minneapolis Public Schools requires us to critically examine the foundation of our district, question long-held assumptions, … and take action … to combat institutionalized racism at all levels of the organization.
“What the Data Tells Us
• The systems in our schools are designed to disadvantage students of color, who show lower academic achievement as a result.
• Our most academically proficient buildings, and often those with the most white students and fewest low-income students, have more experienced teachers than our other buildings.
• Students in wealthier, whiter neighborhoods have more access to rigorous, advanced academic coursework.
• 80% of the students who leave MPS each year are students of color.”
Powerful stuff.
Despite the fact that study after study shows that both white students and students of color benefit the most from the most diverse school population, all other things being controlled for, parents of white students often protest against the mechanisms used to try to address racial imbalance and racial disparities in schools. So, we would not be at all surprised at white, middle-class, relatively privileged parents opposing the CDD. But parents of black, indigenous, Latinx and Asian-Pacific Islander students are also opposed to it in significant numbers, and often because they, too, feel that they are losing something. And they are, because to do what the district wants to do without taking a little bit from everyone would cost more than they can raise.
Actually at this point, there are five different versions of the CDD. If you want to explore all the plans and their implications, go to https://tinyurl.com/w872ly7 and click on your preferred language to open a PDF document. Rumors that the plans involve closing schools or eliminating magnets completely are false. But specific schools and specific magnet programs will change for the most part under most of the plans.
A march was held on March 10 by “a diverse grassroots collection” of parents and their allies. They were not protesting the CDD so much as protesting how late in the game they felt they were consulted. See https://www.facebook.com/events/1015905018808924 for more.

There is an advocacy group called Education Minnesota that has a very useful website for education news and campaigns you can get involved in. Right now, they are working on opposing a right-wing supported bill to amend the Minn. constitution to remove the requirement to provide all students in the state a “uniform” education. And they are supporting the Teachers of Color Act. Check out https://educationminnesota.org/ for more information.

On Friday morning, March 13, the Saint Paul Federation of Educators (SPFE) reached an agreement with the St. Paul Public Schools district, ending the three-day teacher strike. Teachers were expected to return to the classroom by Friday afternoon, although students weren’t set to return to school until Monday. According to a press release, a major factor contributing to the contract settlement was the impact of the coronavirus outbreak on students and school staff. The union’s full membership still must vote on whether to accept the new two-year contract. The ratification vote has yet to be scheduled. Check the SPFE Facebook page at www.facebook.com/SPFT28 for the latest information.

The Minneapolis Schoolfinder, a joint project of the private-public partnerships MN Comeback and Great MN Schools, has been published online. This organization assists a portfolio of schools that includes private, parochial and charter schools; nevertheless, their schools rating handbook and directory looks at public schools as well and gives parents tips on finding the best fit for their kids. Schools are rated High-Performing, then High-Potential, down through middle levels to the “worst,” Persistently Low. Keep in mind that the Schoolfinder defines High Performing as “better than the MN average,” and High Potential as “better than the Minneapolis district average.” It also states that “academic ratings for K-8 schools are informed by three years of MCA data, and, for high schools, a combination of ACT scores and college persistence.” Some of the ratings are not surprising: Southwest and Washburn are the only High Performing public high schools, with South and Henry coming in High Potential. One of the parochial schools rated as High Performing is Cristo del Rey Jesuit High School, which lists a 100% graduation and college acceptance rate. It also says it has 100% enrollment of students of color, but no data on the percentage of teachers of color.

Although no data is given on academic performance by subject or proficiency at grade level, Cristo del Rey is also listed as one of 25 Changing-the-Odds schools, which according to the Schoolfinder means that “students at these schools who come from a low-income background are academically outperforming the Minneapolis Public Schools average and/or are growing academically at a faster rate than the average. Students from a low-income background, who attend changing-the-odds high schools, also have higher rates of graduation and college enrollment than their peers.” El Colegio, a charter school similar to Cristo del Rey, is also almost 100% Latinx but is rated in the Limited Data category and is not a Changing-the-Odds school, perhaps because of a lower graduation rate, although it, too, has a 100% college acceptance rate. All this is just to say, look carefully at all the data available on the Schoolfinder site, and perhaps seek out further information when choosing the best school for your child. If you want to peruse, go to https://www.minneapolisschoolfinder.org/#/school. 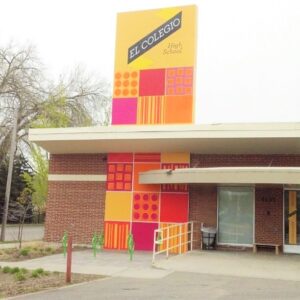