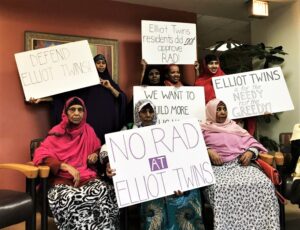 Welcome to Getting About. This new monthly column will inform you about opportunities for those 60 and older to get out of ruts, make a difference, participate in exciting communities, build new communities, and have more control over your living environment. We’ll be looking at “the usual suspects” such as the AARP, Nokomis Healthy Seniors, senior housing resources, faith communities, and programs at public libraries and universities, but also at lesser-known resources, new or growing subcommunities, and housing-based activities and activism, including in the endangered public housing sector.
So, the public housing sector—just how endangered is it? Well, on the one hand, we live in perilous times, so every nice thing is under threat. The wealth gap is widening daily, and you’re all probably on the wrong side of it. Among the good things under threat are: democracy, livable wages, Social Security, civil rights, affordable housing and health care, Medicare, public education, and in fact the planet itself, and the future viability of the actual human race. On the other hand, public housing is not a simple subject, and I think some of its advocates and recipients are panicking based on incorrect information and lack of trust. On the third hand, I could be completely wrong about that, and the lack of trust could be totally warranted. But for now, let’s just zero in on Minneapolis, and on public housing specifically set aside for seniors, which means 62 and over.
MPHA (Minneapolis Public Housing Authority, under jurisdiction of Housing and Urban Development, or HUD) used to be severely “troubled,” but now, though it still has troubles, it’s considered one of the best public housing authorities in the country. It owns and operates 6,259 units of housing, comprising 42 “highrises,” and 948 “townhomes and scattered sites.” (Basically, single and coupled adults live in the former, and families with children in the latter.) Of the high-rises, 12 are designated for seniors only, and seven of these provide assisted-living facilities or services. The Minneapolis Highrise Residents Council (MHRC) “is the independent (501C3) citywide public housing high rise tenant organization in Minneapolis. Its mission is to promote self-government by residents of public housing, and to represent their interests …” (Quote from mphaonline.org.) Each building has its own “local” in the MHRC and elders are often the leaders and do-ers in these organizations, even in the non-designated high-rises.
If you’re interested in housing issues, you may have already heard about the battles over MPHA’s plan to address its serious shortfall in capital and improvement funds by using HUD’s Rental Assistance Demonstration program, or RAD, and/or their plan to upgrade scattered-site and townhome properties with another HUD program, Section 18, not to be confused with Section 8. Because both of these programs rely on partial funding from “private” (often but not always nonprofit) sources, and because of abuses that have occurred in other authorities, these programs have been characterized by opponents as “privatization,” a claim the MPHA vigorously tries to refute. Things are in a fluctuating state right now on that. Among other factors, the head of MPHA, Gregory Russ, will be leaving in a week or so, to be succeeded by Abdi Warsame, who is leaving his post as Minneapolis’ first Somali city council member. Next month we should know more and we’ll have a deeper dive into what’s going on here, along with a look at some other senior housing options such as co-ops.
We’ll leave you with a few events coming up in March:
• 55+ Book Club at Nokomis Library – First Wednesday, 3 p.m.
• AARP MN Lobby Day Series – at the Capitol, March 5 and March 18. More information and registration at https://tinyurl.com/qk7rqzz
• Washburn-McReavy Chapels Pre-Planning and Pizza – at W-M Chapel, 2301 Dupont Ave. S., Minneapolis 55405, Tuesday, March 10, at noon
• Rosen Movement classes (2 hours) – most Wednesdays at 8:30 a.m., Walker Community United Methodist Church sanctuary, 3104 16th Ave. S., Mpls. 55407
• AARP Monthly Walk and Talk – Thursday, March 19, 9:30 a.m., Mall of America, AARP Info Center. Mall-walk followed by healthy coffee break with a short health-related talk
• DFL Senior Caucus Lunch – Fourth Wednesday of every month (March 25), The Egg and I, 2550 University Ave. W., Suite 125N, St. Paul 55114