Will the Park Board sink the Bergan’s apartment bulding? 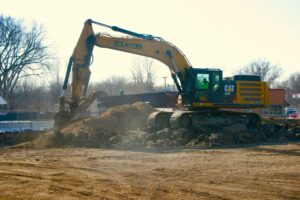 I asked City Council Member Andrew Johnson on Dec. 27, 2019, whether the Park Board’s plans to reduce pumping water from the Hiawatha Golf Course would compromise the footings for the Bergan’s Supervalu construction project. The 2017 analysis by the Park Board (<https://www.minneapolisparks.org/_asset/0rc7ml/February-2017-Stormwater-Surface-Water-and-Groundwater-Analysis-Summary.pdf>) provides no clue. Figure 22 on page 51 shows a significant wetland area less than 200 feet from the proposed development. One would think this would have been a matter of concern for the city engineer. It is possible that reduced pumping could increase groundwater and compromise footings under a five-story building.
Since 1979, the average water level in Lake Hiawatha went from 810.3 to 812.7, according to Table 5 Lake Hiawatha Water Elevation Summary, p 22: “The replacement of the dam at Lake Minnetonka in 1979 has modified the flow regime in the creek, resulting in more constant flows throughout the year when historically flows would stop in Minnehaha Creek during dry periods. Additionally, there are periods of sustained high flows (~250-300 cfs) [approximately 250 – 300 cubic feet per second] along Minnehaha Creek when Lake Minnetonka is being drawn down in the fall that can result in elevated water levels in Lake Hiawatha.”
The Gray’s Bay dam has increased the average water level of Lake Hiawatha by 2.4 feet. If we are genuinely concerned about reducing pumping, then why haven’t the city and the Park Board questioned the priorities of the Minnehaha Creek Watershed District that place a higher value on consistent docking facilities for weekend yachtsmen than on the flooded basements in South Minneapolis?
On page 47 the analysis tries to solve the riddle of why Lake Hiawatha flow seems so sluggish: “The calibrated River cell conductance values suggest that Lake Hiawatha has a weaker hydraulic connection to the unconsolidated aquifer than does Minnehaha Creek. It is physically plausible that fine-grained, low-conductivity sediments from Minnehaha Creek and storm sewers have accumulated on the bed of Lake Hiawatha over the years. Such sediments would add resistance to flow between the lake and the aquifer.”
In plain English, the problem is that when Theodore Wirth dredged the lake in 1929 the maximum depth was 33 feet. Today, it is hard to find a depth of more than 12 feet. Just outside the storm sewer tunnel at the north end of Lake Hiawatha that empties street storm sewers from Lake Street to 43rd Street, from Chicago Avenue to 27th Avenue, the depth is less than 2 feet. You can sometimes see waterfowl standing in the shallow water across from the tunnel. The “fine-grained” sediment is sand—sand that is put on city streets in the winter to help provide traction for cars under icy conditions—that washes into the gutters and flows down the storm sewer system until it reaches the floor of Lake Hiawatha. Doesn’t the city have some liability for degrading the water quality and swimming facilities at Lake Hiawatha by lowering the water level? Shouldn’t the city make an effort to dredge the lake and restore its water quality?
I asked Johnson to forward my concerns to the city engineer for a resolution of these questions.
On Feb. 20, I received this reply from Jeremy Strehlo in Public Works:
“The proposed project is subject to review and permitting by both the City of Minneapolis and the watershed district. The floodplain review in the zoning code is specific to the first-floor elevation, so the building does not take on stormwater. Staff have reviewed the foundation permit with the Floodplain manager and found that the proposed project complies with City ordinances. Surface Waters and Sewers has also reviewed the project and found it to be in compliance with Public Works standards and ordinances through the approved PDR application.”
This does not answer the fundamental question: “Will the proposed flooding of Hiawatha Golf Course affect the foundation of the construction project?” Clearly, city staff has not considered the future envisioned by the Park Board and what effect it will have on the water table under the construction site.
Kathy Kelly, of the Citizen’s Advisory Committee that was formed to make recommendations for the future of Hiawatha Golf Course (see article on this page), says, “I had heard that the builders had originally planned on building the five-story building without installing pilings under the building down to bedrock to keep the building from sinking. They later determined that they would have to install pilings.
“The houses on our block are all built on pilings due to the instability of the ground underneath. Years ago, a new person moved into the neighborhood on the northeast corner of 44th and Longfellow. He had an open house and when I went into the basement, the floor was dramatically wavy. You could see exactly where each piling was. And my dad, at one point, had a contractor come in and drill holes through the basement floor to push in something (concrete?) under the basement to mudjack it, trying to make sure that there were no empty pockets developing under the basement floor. And, in talking to the owner of the house on the southwest corner of 44th and Longfellow a year ago, she said that they had just replaced the whole basement floor. This family has since moved.
“So it would be interesting to know for sure if the new building is required to be built on pilings. After all, this is not a private home that affects only one family. It is a rental building that will house at least 125 people. It should have higher standards than a home.”
The flooding of Hiawatha Golf Course will greatly exacerbate the danger of flooded basements and compromised construction.
It seems the city could do a better job assuring the new tenants at the Bergan’s Supervalu site that their future safety is their primary concern.