On March 16, in response to a rising number of COVID-19 virus cases, Minneapolis Mayor Jacob Frey declared a local public health emergency, closing or limiting access to bars and restaurants except for take-out orders and delivery, until April 1. The same day, Minnesota Governor Tim Walz also ordered dine-in restaurants and other gathering places to close. Then, on March 25, Walz extended the restaurant-closing order until May 1. The extension of the ordered closings was not unexpected by those in the restaurant industry.

Hard times at Modern Times
At Modern Times, by the first order to close, the restaurant was already dark, its staff laid off and applying for unemployment insurance payments.
Dylan Alverson opened up his breakfast and lunch café, Modern Times, the brightly painted building at 3200 Chicago Ave., nearly a decade ago, almost on a whim, after spotting the empty restaurant space while out in the Central Neighborhood with his young daughter. Using money he made from selling his bike shop in Olympia, Wash., and with help from friends, he made the building usable. 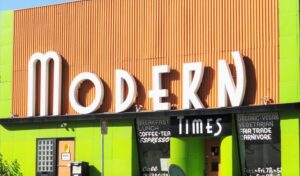 He gave the place what he calls a casual “hippievibe,” serving food made from local products, offering vegan, vegetarian and omnivore food to crowds of neighbors. It soon became a neighborhood institution.
But, on March 15, a day before the official restaurant closures were announced, Alverson learned that at least two people living nearby had tested positive for the COVID-19 virus and made the decision to close up until the virus danger had passed. He distributed perishables to members of his laid-off staff and to neighbors, but announced that he would not open for takeout.
“Ending up contaminating someone with a deadly disease and possibly putting people at risk isn’t worth it,” he said.
“I knew someone within one degree of my staff with the virus,” he said. “I’m a little stressed out. I have 21 employees and no income. I thought by shutting down and laying people off now, the staff would get to apply for unemployment early.” On a brunch day, he said, the cafe would typically employ four servers, a dishwasher, three cooks and a manager, but even if they decided to do takeout, they’d be down to three staff people—only three jobs out of nine would be saved.
Alverson said that he’s keeping busy. “I have three children who are not in school. I’ve been home-schooling them. I walk my two dogs on the Greenway every morning at 7 a.m. I’m also doing a lot of paperwork, applying for a new SBA disaster relief loan and a new state business loan.” He is also managing a gofundme page, after finding out that their insurance would not cover payroll costs, utilities and rebuilding the food supply after reopening. He hopes to raise $30,000.
“If it goes on longer, I am not sure what we’ll do,” he said. “There are some things I have been thinking about. Perhaps offering more of a grocery service or soup and bread that we could control from our end, things being germ free.”
He is hoping to start selling the Modern Time’s hot sauces, mugs, T-shirts and sweatshirts to bring in income. “I want people to take this seriously. I know a lot of people with compromised immune systems or who are elderly, and they are scared. It’s especially hard on them. It’s going to take everyone working together on all of this,” he said.
As of the afternoon of April 4, Modern Times gofundme page had brought in $17,066.

A very strange grand opening at Heather’s Restaurant
Heather Asbury had hoped to open Heather’s restaurant in the former home of Mario’s Pizza Parlor, at 5201 Chicago Ave., at the end of 2019. The building had been vacant for 15 years, and when work began on the building last April, it became the subject of years of speculation among the residents of nearby neighborhoods. “It was a tricky old building and needing a lot more attention than we were expecting,” she said. 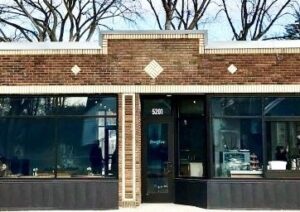 The restaurant had a soft opening during the first two weeks of March, the staff experimenting with the menu while curious locals walked by, peering through the windows to get a glance at the newly remodeled interior. A grand opening was set for March 18. Then, on March 15, the city’s mayor and the governor announced that restaurant and bars would be closed except for takeout or delivery services.
“We had no idea, no clue that his would happen. We were originally set to open in November but there were constructions problems. It’s a strange time to start a restaurant. It’s not easy.”
The government closing order was unexpected, but Heather’s was ready.
“We’d put in a walk-up window with plans to use it for serving ice cream in the summer, but that’s now our service window. People can call or order online if it’s cold or rainy or snowy,” she said.
“We’ve been very busy—busier than we would be if we were open for sit-down service,” she said. “We want to keep our staff employed. We lost some people who decided to quarantine on their own, which I support. Some didn’t want to work with the public, but others are healthy and really wanted to work. Some workers no longer have their second job, a problem, especially with kitchen workers, who often have several jobs.”
There were adjustments. The restaurant had been getting their pastries from Rustica bakery, but when that bakery closed its facilities, they scrambled to find another and found Lynnhall bakery in Uptown. “It’s a good partnership,” she said.
“We have to put all our glassware and plates in storage. And, I had to hire new people. When this is over, some of my new kitchen staff will go back to their old jobs and some are students who will go back to school, but I want to keep most of them on.
“We have limited hours, 10 a.m. until 8 p.m., but we’re serving the entire menu,” she said. “The phone orders drop off after 7:30 and we close the window at 8 because once it gets dark, it’s hard to serve through the window.
“We still do breakfast, lunch, dinner. We try to keep it interesting. But, it is what it is,” she said. “Words really can’t describe this.
“We will keep going until we can go back to normal,” Asbury said. “For now, we completely switched gears. When this is over, we may have to have a new grand opening. The neighborhood is most wonderful. They welcomed us with open arms.”

Many have heard the horror story of the Bartmann group of restaurants. She all but closed the doors to her seven restaurants, laid off over 200 employees and then could not make her final payroll. She has been grilled in social media, and truly, those employees have every right to be angry. The restaurants were collecting the tips that were put on credit cards (most of them) and then reporting them as income on paychecks. This will turn out to be a good thing on unemployment for servers, but it also exacerbates the injury of missing the final checks.
Kim Bartmann’s public statement, “Please know that I’m doing everything I can to make it right. I’m seeking investors. I’m applying for the SBA’s economic disaster relief loans. We’re pursuing catering contracts, selling gift cards, and petitions to be able to sell wine and beer with delivery and takeout. I will do everything humanly possible to make it right,” did little to help the economic situation for her employees. There is just nothing good about this situation.
Over the years, the Bartmann group has shown great creativity, community solidarity and progressive leadership as she grew her business. She has hired experienced managers, as well as given people a chance to grow in her organization. Her block parties, like the ones during Pride, Bastille Day and others have been landmark community events that have employed local musicians and artists, and who doesn’t know someone who has performed at the Bryant Lake Bowl?
To do this she had to be brave, some call it risky, too risky, some call it hustling or entrepreneurial. Yes, she stretched her cash flow, but most of us who have run a business know what that’s like. It took a major virus, and then the governor shutting down her industry to cause her to crash and burn. I admit, I do love and admire her, but my heart weeps for the state of her workers in our neighborhood.