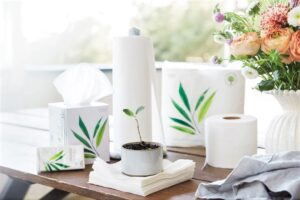 I got addicted to a computer game called Onnect. Before I deleted it in exasperation, I was playing it an hour a day or more. I loved this game, but not enough to pay for it, so I had to watch some really annoying ads over and over, until my ire at the ads overtopped my jonesing to play the game. The one that sticks with me is very relevant to Earth Day, officially Wednesday, April 22 (although with the COVID-19 raging, we expect celebrations to be subdued, i.e., canceled). In this particularly infuriating ad, a mom and her little girl are doing their separate things in a beautiful upscale kitchen, when a glass of water gets knocked over. Mom reaches for a wad of paper towels. Daughter asks, “Mom, where do paper towels come from?” Mom replies, “Um—trees, I think.” Daughter can’t just leave it alone. “A lot of trees?” (Cut to Mom’s face, looking guilty and helpless.)
Yes, the somber narrator informs us, it IS a lot of trees. In fact, it’s “94,000 trees every day in the U.S. alone.” The ad then goes on to sell us bamboo-sourced paper products, which is not what infuriated me; I’m in favor of bamboo products. Not content with just saving trees, the new socially-responsible company is also PLANTING trees. A LOT of trees? Oh, my, yes. They have already planted 150,000 trees! And they’re going to try to plant a million trees in a year. You can see the ad here: https://www.youtube.com/watch?v=4s4GmH0iKeM. And for those who don’t glom onto math problems as quickly as others, here’s what I found so annoying: In almost a year, this company (Seedling) planted enough trees to replace a mere 36 hours of harvesting just for paper towels and toilet paper. In their very aspirational and ambitious next year, they would replace their evil industry’s destruction of —gasp—11 whole days’ worth of trees (one million)! But what really brought me all the way to fury, as well as confirming my pervasive “we suck” feeling about American capitalism, was seeing what some less “special” countries of the world are doing about deforestation and carbon sequestration shortfalls. The same week I deleted the game from my iPad, I saw a news flash that Ethiopia had recently broken an official Guinness World Record in its friendly competition with India over “afforestation,” the opposite of deforestation. The standing record, because the book has not been updated yet, is 50 million trees in 24 hours, planted by volunteers across India in 2016, not as a marketing ploy. (That would cover about 18 months of U.S. paper products.) Ethiopia, however, planted seven times that many, over 350 million trees, in only 12 hours. One million trees in 365 days or 350 million trees in half a day? And is it worth paying over two dollars a roll for bamboo toilet paper to feel this good? (Sarcasm.) 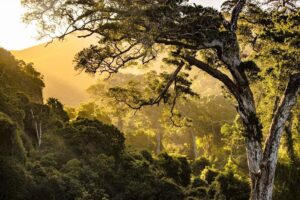 A forested valley somewhere in Africa

I am hoping my little rant will serve to introduce the topic of what should be a well-worn angle on environmental values and responses to climate chaos—what you might call an existential mental barrier or simply first-world ambivalence about these issues (the first world, my world, being the only one about whose thoughts I am entitled to speak, but not the only valid viewpoint there is). The reason we often encounter a barrier when we try to think strategically, ethically, individually, and perhaps, ideologically about the problem of the environment is that there are, in fact, several barriers there. In other words, dualisms, fake mental walls between concepts. Ideologically, there is the wall between capitalism and socialism. In terms of individual responsibility, there is the wall between individualism and communitarianism. Ethically and strategically, there is a wall between what we think is our responsibility and within our power, what we think ought to be our responsibility and within our power, and what actually is within our power. And these various walls cut across the problem in different directions, and we as individuals can be on different sides of one wall but the same side of another wall as any other given individual. Consider a person who identifies as a socialist, who thinks they know what a capitalist is but actually doesn’t, who also identifies as an individualist, and who tends to greatly overestimate both their own power and their own responsibility. This person doesn’t think a lot about ethics, but if pressed would be a relativist. Then consider their comrade, who also identifies as a socialist, but as a communitarian one, who believes in moral absolutism, and who tends to greatly underestimate their own power, but overestimate their own responsibility. Now imagine these two individuals trying to come to agreement on, let’s say, the best way to control carbon emissions. Does this sound familiar? Do you think you may have actually had this conversation at some point? What normally happens here, in the best of circumstances, is that the discussion grinds to a vaguely uneasy halt at some point—too many variables, too much complexity. Mental passivity sets in. Well-meaning people either recycle or don’t, give up their car, or make rather pathetic arguments about why they can’t, go vegan and assume that’s enough, or do something else but feel guilty every time they eat cheese or chicken. 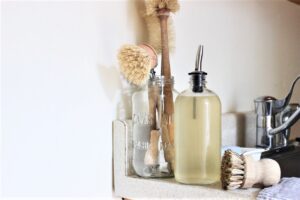 Replacing plastics in the home

You come to the very understandable view that you can’t possibly do all the right things for the environment, and still live. And you’re right, you can’t! For one thing, there are systemic factors beyond your control, so that you participate in the destruction, or die, or close to it. For another thing, bad actors (or sheer ignoramuses) will lay a guilt trip on you that because you can’t unilaterally drop a certain destructive behavior, you have no right to struggle against it, or demand alternatives. Consider pipelines. People who don’t see a problem with pipelines love to accuse active opponents of pipelines of hypocrisy, because they buy gasoline, take airplanes occasionally, and actually have the audacity to heat their homes in the winter, and use electricity to charge their cellphones. Or take my outsized aggravation with the hapless executives of Seedling Inc and their pathetic one million trees. OK, so I should be happy that Marc Benioff, CEO of Salesforce and another green capitalist (which to my mind makes about as much sense as a reptilian rabbit or an atheist priest), has proposed a global tree-planting project called the One Trillion Tree initiative (see 1t.org). Well, OK, maybe, but how should I feel about what British ecologist Thomas Crowther has to say about it: “If tree planting is just used as an excuse to avoid cutting greenhouse-gas emissions, then it could be a real disaster.” So, this could either “save the planet” or it could be a huge greenwashing scandal that costs someone (probably not Benioff) $300 billion. (See https://bit.ly/2X0ref8 for the whole story.) 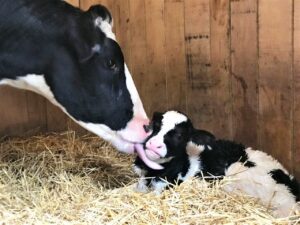 Brianna, a cow who escaped slaughter while pregnant, and her daughter Winter

I actually think I have a partial but workable solution you can use in your own life. I haven’t bottomed this out into a full system yet, but I’m working on it. First, you give up any thought of perfection, purity, or of power that you don’t actually have. Then you take a fearless and searching inventory of your own values. What matters the most to you—your health, your family, the survival of the human race, the survival of the ocean (the human race being a lost cause) or something else? Do you care equally about human suffering and animal suffering or does one matter more? Do you believe in a higher power and/or an afterlife or is that crazy stuff? You also take an inventory of what you can do, what you cannot do, and what falls in between. Then you do a ton of research, and try to determine which actions—going vegan, giving up your car, moving off the grid, eliminating plastic, growing mushrooms, going back in time and killing Hitler—are going to give you the highest return in your most valued areas and the highest personal satisfaction. Then you do those things. And you don’t give in to regrets, guilt or blame, but teach everyone you know how to do the same. I reckon that, plus the fall of capitalism (obviously!), will ultimately save us.