‘Out of the Impossible: The Hope of The Lost Boy’ 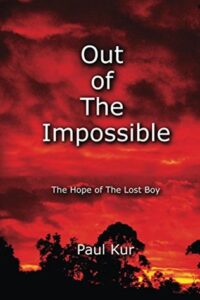 What happens to a child who has been on his own in the world since the age of 5—in the midst of an African civil war? What does he learn? How does he see the world? How does he heal himself from indescribable horrors?
Paul Deng Kur, one of the 3,500 South Sudanese young men named the “Lost Boys” by the Western press, has written a book about the period of time when he should have been a child. In the course of processing the trauma of that lifetime—during Sudan’s second civil war, which began in 1987— Kur offers astonishing moral depth, immense honesty, acute insight. His affirmation of the value of each human life; his understanding of the irrational nature of prejudice; his nuanced awareness of the nature of political entities and how they operate; and his cautious but open approach to religion all come to one conclusion: People need to always help each other if they can. Needless to say, he is opposed to war and the millions of innocent lives it destroys.
It was very, very hard to read of the extreme suffering of the approximately 27,000 children who walked through deserts and jungles trying to escape to Ethiopia—only 4,000 survived.
Not everyone who has suffered gravely comes out where Kur has come out. His moral strength is an inspiration. His compassion for people who suffer is heartening.
Many Lost Boys from the Kakuma refugee camp in Kenya were resettled in the U.S. around the beginning of the 2000s and Paul Kur was one of them. He had learned to read and write basic English in refugee camp classes. When he was sent to Pennsylvania, he was able to enroll as a junior in high school. His perseverance in pursuing education was nothing short of astounding. In 2014, he self-published his memories.
At the very beginning of the book he writes: “It is time to pour out my childhood of struggles onto the pavement and let them roll away in tiny streams, like tears down a cheek. The memories will continue to run through my veins for the rest of my life, but by sharing my story with you, I hope to wash myself of many issues so I can step out into the world once more—clean.”
I read the book twice. The first time, I didn’t notice that there was no clear timeline. So, it didn’t tell me at what age he was first given a gun to fight for the Sudan People’s Liberation Army (SPLA). (On the back of the book it says he was 8.) Through the many, many vivid stories, I rarely knew what age he was or where he was geographically when different things happened. In the second reading, I noticed the lack of chronology and location, but I felt it served to create a visceral feeling of the chaos in which he was immersed.
Theories of human development say that if proper nurturing occurs in the first three years of life, a person’s humanity will be intact. Because of who Paul Kur is now, it seems he had that good foundation. In the book, he talks about the SPLA trying to be surrogate parents, “but they were unable to prioritize their children as real parents always do.” He described real parents as the ones who give you “protection, emotional support, physical care and wisdom.” As a child, naturally, he had a conflicted relationship with the SPLA.
In the book, it seems that intense ties to his tribe, Dinka Bor, and a strong sense of tribal identity were at his core and provided him with the hope he needed to carry on. Although he traveled much of the time with cousins, the hope of finding the rest of his family was paramount.
I met Paul at a friend’s house in January. In talking with him I’ve learned more about his journey. He said one of the things that helped acquaint him with English before arriving in the U.S. was trying to tell English-speaking doctors in refugee camps what was wrong, since there were few interpreters. He said when he was finishing high school in Pennsylvania, he read books over and over and over, wrote endless conversations, and also wrote pages and pages of letters to his grandmother, who he knew had been killed, and to his mother and siblings who he assumed were not living. Then, in 2005, he learned they were still alive, but he still has not seen them.
Kur hoped for South Sudan to gain its independence from Sudan, and when that happened, he wanted to go home to help establish the new country. He prepared himself by earning a B.A. in sociology and political science followed by a master’s degree in social and comparative analysis in education, and another master’s degree in organization leadership. And, although he has found healing from PTSD in writing his book and also in meeting with other Lost Boys, it still makes him wary of going back. After South Sudan gained its independence from Sudan, in 2011, fighting broke out again in 2013. Recently, an uncertain peace agreement has been signed. The violent, unstable situation there is forbidding.
For the time being, Kur is driving Uber and LYFT in Minneapolis (although that is temporarily on hold because of the coronavirus) while looking for a steady job and has written another book. Although the equality for marginalized people that the SPLA idealistically fought for was somewhat accomplished, Kur’s second book raises awareness of the equality that has not been gained—that of women and girls in South Sudan. Hopefully, he will soon find a publisher.

“Out of the Impossible: The Hope of The Lost Boy” can be ordered from amazon.com