How has Nicollet Avenue fared so far? 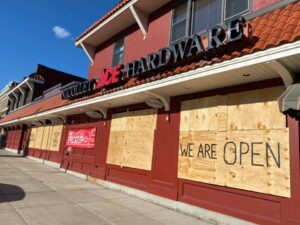 Nicollet Ace Hardware was boarded but open for business.

On May 30, the fifth night of all-night protests and associated property damage responding to the racist murder by police of George Floyd, attention turned to the 5th Precinct police station at Nicollet Avenue South and 31st Street. The 3rd Precinct station had been abandoned by police two nights prior, and burned to the ground, the photo op that circled the globe and ignited uprisings from Brooklyn Park to Brooklyn, from Toronto to London, Hong Kong, Manila, and Canberra.
There was a curfew in effect, but it was widely ignored. There were National Guard soldiers on the streets of Minneapolis, but as Governor Walz said, not enough. Police stood on the roof, and fired “non-lethal” weaponry on the crowd, but did not abandon the station as happened in the 3rd. So, the precinct station survived the night.
Some nearby buildings were not so lucky. Among those within a few blocks totally destroyed by fire that night were Quality Tobacco, a Subway, an O’Reilly Auto Parts store, a Family Dollar, and the U.S. Post Office for 55408. Others severely or noticeably damaged included a gas station, a Wells Fargo Bank, a CVS Pharmacy, a Dollar Tree, an Office Depot, and a discount department store—Kmart. 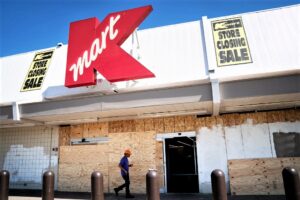 Kmart just before it was
looted.

The story of Kmart is interesting. The store has been at the heart of neighborhood political strife since it was first built, bisecting Nicollet Avenue at Lake Street, with its vast and mostly empty parking lot. People wrongly assumed from the lack of cars that the store was unpopular. Actually, it was very popular with the car-lacking poor and/or urbanite, who walked, biked and took the bus in droves to shop there. (For more details about the complex Kmart situation, see Southside Pride’s article of four years ago—https://southsidepride.com/2016/06/14/nicollet-avenue-better-without-the-Kmart-parking-lot/.)
Kmart was already effectively under contract of sale to the city, slated for demolition later this year. They were holding clearance sales; the Lake Street store was its last successful store, and its closure will probably mean the end of Kmart. COVID-19 had already complicated things, and store managers were looking forward to the easing of stay-home orders in just a few days. Looters took that thorny decision out of their hands; after a lot of the merchandise was taken, someone turned on the sprinkler system. Kmart executives decided over the weekend that all they would do was a cleanup (with help from neighborhood volunteers) and close the store early.
As we have done in previous focus articles, we’ll take a look at a variety of Nicollet Avenue and nearby businesses and organizations, and see how they have managed with the disruptions of the COVID pandemic and 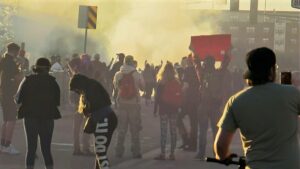 the George Floyd uprising. We’ll start with Nicollet Mall and Eat Street, and move south.
Downtown has been affected in a major way by both disruptions. COVID cleared out the skyways as most office workers began working from home or were furloughed. The Nicollet Mall Farmers Market was one of the few in town to be canceled for fear of crowding and contagion. As homelessness has risen with the oncoming economic depression, and homeless shelters came under concern as potential hotspots, several hotels have been temporarily converted into shelters for homeless people at risk. The Central Library, at the very north end of Nicollet Mall, used to be the homeless community’s social center, napping spot, hygiene stop and internet cafe, but it’s been closed for months now. Downtown, Nicollet Mall and nearby Hennepin Avenue, have seen a lot of protest action too, mostly but not totally peaceful.
Eat Street actually fared pretty well. A lot of the restaurants there did nearly half their pre-COVID business in takeout and delivery, so it wasn’t a major shift. Many of the smaller ones are mostly family-owned, so had more flexibility in what they decided to do in response to the stay-at-home order. 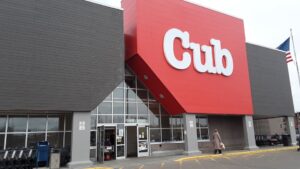 Remodeled in late 2019, Cub Foods has a futuristic facade.

Some businesses were targeted by looters, most sustaining only minor damage, the overwhelming majority owned by POC or immigrants. These included restaurants and coffee bars—the Nicollet Diner, Icehouse, Peninsula, Rainbow Chinese, Tibet Kitchen, Ichiddo Ramen, Christos, Black Sheep Pizza, Marhaba Grill, Glam Doll Donuts, Spyhouse Coffee, and a dozen more. It includes about a dozen small markets—Halal, Oriental, Latinx and liquor stores. Additionally, it includes non-food businesses, such as at least three cellphone stores, a record store, an audiologist, two jewelers, two child care centers, a Family Dollar, several hair salons, a transitional housing residence, a theater and various miscellaneous businesses.
St. Stephen’s Human Services, its HQ located a few blocks off of Nicollet Avenue, is on the frontlines of COVID-19 by virtue of being on the frontlines of homelessness. Right at the start of the stay-at-home order, state officials recognized how problematic it would be for homeless individuals and families. As many homeless people are also disabled, elderly or otherwise at risk, it was more than problematic. An early adaptation was to rent out hotel rooms in empty hotels to house at-risk people in better isolation than they could have in a crowded shelter. But that still left a lot of younger, relatively healthy people who didn’t want to get sick in a shelter. So, the encampments restarted—and grew.
In the very height of the protests against police brutality in late May, someone—county, city, it’s not clear—made the decision to close the Hiawatha encampment, which had grown to around 100 people and was only blocks from the area experiencing the greatest arson—Lake and Minnehaha, 27th Avenue, and the Minnehaha Mall and Hi-Lake shopping centers. And then another wrinkle was created. A few folks recently at the camp managed to secure rooms at the Sheraton Midtown on Chicago Avenue, adjacent to the Midtown Global Market. Word got out and homeless people flocked to the Sheraton, along with mutual aid providers bearing food and hand sanitizers, and St. Stephens Street Outreach, bearing Narcan, resources and expertise. The county began paying 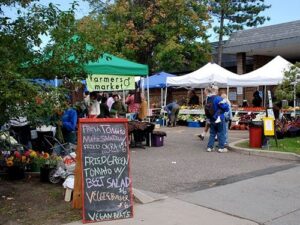 the hotel owner and people kept coming. The so-called Sanctuary Hotel was deemed a new Occupy/Commune/paradise for homeless people—until it wasn’t. Following an overdose on the premises, the over 200 homeless residents were evicted on June 9, into the (not literal) arms of St. Stephen’s and other street social workers. (A lot of them are now in Powderhorn Park. More on that elsewhere.)
Once you get south of 31st Street, the scene on Nicollet is less ravaged. There were a number of businesses vandalized all the way to the border with and into Richfield, but sporadic and not major damage. Now that things are cautiously reopening, it’s possible to go shopping, and to order food onsite, although in many instances only the patio has opened for dining. One way it has been suggested to show solidarity with POC communities is to patronize their businesses. Or many businesses that are not POC-owned are giving profits to BLM-aligned organizations or mutual aid networks.
The Butter Bakery Cafe at 3700 Nicollet Ave., located in the ground floor of a housing project for youth at risk of homelessness, is a certified B corporation that was already giving a lot. During the lockdown, they were delivery-only for a while, then set up a take-out system. Now their patio is open and they are almost back to normal. Another popular place is Hola Arepa at 3501 Nicollet Ave. Takeout only until June 17, they are now open for patio dining, with reservations via their website. A great minority-owned business a few blocks from Nicollet on Lake, Trio Plant-based is open for business and had earlier been feeding both frontline workers and protestors for free.
For other shopping, there are three good hardware stores on Nicollet—Fratellone’s at 1804, Nicollet Ace Hardware at 3805, and Diamond Lake at 5425. Also, with the many nearby grocery stores closed, it’s good to remember there’s a large Cub Foods with a complete pharmacy at 5937 Nicollet Ave. Final mention is for the excellent Kingfield Farmers Market at 4310 Nicollet Ave. on Sundays, starting at 8:30 a.m. You can get more information and sign up for their weekly newsletter at www.neighborhoodrootsmn.org/about/kingfield.