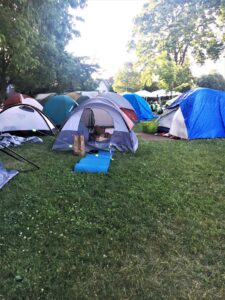 We have new neighbors in Powderhorn Park. The media calls it “the tent encampment,” described as over 100 (and growing) homeless people living in tents, some recently evicted from the local Sheraton Hotel where they were being temporarily housed, post protests/riots and the associated destruction.
Living a half block off the park, I’ve met a few of my new neighbors. Closest to my house is a family of three in two tents: Johnny, his mother, Mae, and his wife, Julia (not their real names). They are white. They have been looking for a new home, having started out in Denver. Mae has ties in Minneapolis so they thought they’d try a new start here. They did not come until after the protests/riots. Johnny has no use for the government or police. He prides himself on self-sufficiency and has rigged up a make-shift shower under a tree. He believes in defending oneself. They had not been staying at the Sheraton. They like Minneapolis — “It’s friendly and people seem to care” — thanks to the Minneapolis Sanctuary Movement and other socially-minded organizations. Johnny has done time for drug dealing but really just wants an opportunity to work and support his mom and wife and live in an apartment “like normal people.” He has skills working with cement. He and his wife took a bus to Brooklyn Center to apply for warehouse jobs at Amazon.
While talking to them, a young Native American woman approaches with a shopping cart full of stuff, including a tent. I learn that the city is providing tents. Wanda seems confused and declares that she’s never set up or even slept in a tent. She wanted to stay on the northwest side of the park because “over there (east side) I have some enemies and I don’t want to be around needles.” Johnny and Julia helped Wanda erect her tent in a shady spot. By now Johnny and Julia know the shady from the sunny.
I walked farther into the park. I see that there are now five port-a-potties. Yesterday there were only two. As I walked farther south, I saw that another area of the park, the east side, is growing in tents. I’m told that that is the area for families with children because it is near the playground.
When I wander the park, I bring supplies: water, bread I baked, canteens of coffee, TP, etc. People seem very appreciative.
As I leave, Johnny invites me to come back this evening: “Mom will be up by then.” I guess he figures I am closer to his mom’s age than his and that we might have things in common.