Cry, the Beloved Community. It’s really different watching breaking news when it’s your own neighborhood and your own heart that’s breaking. The Southside and my neighborhood, Powderhorn Park, in particular, have been full of heartbreak in recent weeks. We feel in the center of an erupting maelstrom of societal ills.
The callous, terrorizing police killing of George Floyd on Memorial Day set in motion a cascade of protests. Tens of thousands of 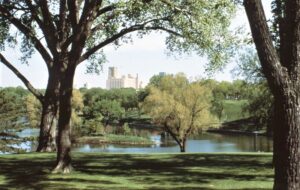 locals—many trying to keep pandemic protocol—marched in outrage and peaceful solidarity the night after Floyd was killed. Yet another virus—violence—spread quickly and suspiciously under the skirts of rage. Acrid smoke and embers plagued our homes as major fires consumed buildings. Hundreds of enterprises, large and small, that employ and serve our community were damaged or destroyed. Over the next five days, we were all terrorized by serious threats to safety, but we’d also gotten organized. At Powderhorn Park the Saturday and Sunday after the murder, organizing rallies were held, each with nearly a thousand observing pandemic protocol. We recognized that we were under attack by forces multiple and serious. We needed to organize to protect ourselves since we could not count on uniformed professionals to respond to our needs. Block residents quickly planned to support the protests while protecting each other nonviolently with various strategies, including posting vigils through the nights of curfew for the next week. We even put out twinkle lights and signs to welcome protesters. And every morning, neighbors showed up with brooms and buckets to clean up the mess.
After a week of curfew and vigils, Powderhorn Park was then the site for the remarkable and historic declaration of a majority of the City Council that the police force would be re-designed into a community safety system in which all in the community could trust.
Then, after hardly three nights of non-vigil sleep, a new emergency arrived in Powderhorn Park. People evicted from the sanctuary hotel debacle (formerly known as Sheraton) began tenting in the park. A very sad set of perpetually traumatized people were in need of every basic service in our backyard. Neighbors responded with compassion, but we were divided about the wisdom of the encampment in the park. Soon a multitude came to tent in the park for a variety of reasons and the number of tents grows every day.
It’s fitting that a disaster relief group set up their equipment in the park since this is a disaster unfolding. It’s comparable to a refugee camp but below international standards. Here are folks who have fallen out of being able to “make it” on the very demanding terms we’ve established in our “winner take all” system. The long-festering ills of our society—housing and health care as financial commodities, family breakdown and anomie, widespread distrust of social institutions, untreated mental illness, alcohol and drug addictions, dispossessed communities exploited in illicit trafficking instead of cooperating in community safety—are on display in our backyard. Some have learned to deal with life by being cons, some by being provocateurs. Anger tends to spill out not at its cause but undifferentiated, at whomever is nearby. Much is painful, triggering and threatening to witness.
Also called to the park are an incredible set of “volunteers” leaning into best outcomes for the poor, or at least for getting through this day without harm. Most of them identify with those in need and use radical love and empathy to de-escalate emotions and help people live in community. They attempt to have a community meeting every evening for self-governance. (Look up the Minneapolis Sanctuary Movement for how to help.) All of our best practices, however, for treating mental illness and addiction require trust and hope and are helped by a sense of community—conditions that would be served better by boundaries and limits on the encampment.
Of course, all of this is unfolding during a pandemic that threatens both sudden death and widespread economic upheaval. For the first time in history, the whole world is experiencing the same thing and is able to communicate about it. And all of this while time is running out to make radical changes to prevent climate catastrophe. It’s all very breath-taking.
Meanwhile, in the aftermath of the callous breath-taking of George Floyd, some religious people are claiming that an outpouring of holiness is occurring in the area. George Washington Carver himself, years ago, declared that Minneapolis would be the site of a grand spiritual revival. Some claim it’s happening now.
On the national level, the Poor Peoples Campaign for a New Moral Revival is calling for a “revolution of values to save the soul and heart of our democracy.” In their words: “The political and economic systems in the U.S. are plagued by the interlocking injustices of systemic racism, poverty, militarism and a war economy, ecological devastation and a distorted moral narrative of religious nationalism. Somebody’s hurting our people. It’s gone on far too long, and we won’t be silent anymore.”
How do people get so callous to the needs of others? Some of it is the mindset that violence is necessary. As George Floyd begged for breath, the officers mocked him. The domination system requires violence and humiliation—which leaves a wake of trauma. And it tends to corrupt the character of all concerned. Now the Southside—and our nation—must make a grand evolutionary leap. May we move from trauma to transformation, from uprising to up-wising, moving from a culture of killing to a culture of caring.