Things are different now, at 38th and Chicago Avenue

A little more than two months ago, the corner of Chicago Avenue and 38th Street was a small business hub for many who lived in the Powderhorn neighborhood of South Minneapolis. But when a member of the Minneapolis Police Department kept his knee on the neck of George Floyd for 8 minutes and 46 seconds, executing him in front of a crowd of people, the corner and much of the world changed forever.
Some of the longtime businesses on the corner—Cup Foods and the local Speedway Gas station, as well as many others, remain boarded up and dark. The corner church, Worldwide Outreach for Christ, continues to hold services—outside and using social distancing. Chicago Avenue has been closed to through traffic, and rerouted traffic speeding through the nearby neighborhood streets is now slowed by city traffic bumps. 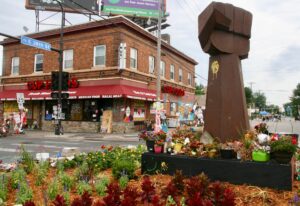 The intersection remains a shrine to the memory of George Floyd and what he now represents. A 15-foot-tall raised fist rises out of a garden of flowers at the center of the intersection. Here, people leave offerings to remember not only George Floyd, but the attitude of racial injustice that caused his death. Even on a Sunday morning, people come to see and to pay their respects. Some see it as their sacred duty to maintain the area.
Neighbors come to maintain the shrine. A medical tent, where nurse Cary Wong and oth-ers are there to help, is ready to treat minor to major medical situations. During the heat wave, most come in with heat exhaustion and other heat-related problems, Wong said. He volunteers to support his city. “I’m a nurse. Minneapolis is my city. It would be weird if I didn’t help out where I could.”
Janille Austin, who lives in the area, comes each day to help maintain the memorial. On this morning, she is helping to take some of the dying flowers to compost. “This memorial is sacred space,” she said. “George Floyd was killed here and it is important to tend it.” She keeps a photo journal so she will always remember. “This is an historic time. I have the time and I put my camera away to help clean,” she said.
“I would like this to again just be a corner, but a man has died unjustly. Once there is justice, we can talk about the space,” she said. “There are different layers to justice. There is the systemic racism that put him in this situation. Police culture came out of the slave patrols. We’re talking about a culture, not about individual police officers. Our tax dollars are going to fund the police and they get sent on calls they don’t know how to handle. We need to reimagine the police so people can live and thrive as a community. It’s the community that needs to help keep us safe.”
There are still frequent demonstrations, but at this crossroad, they are peaceful. On July 5, the 10K Foundation’s New American March from the Mall of America ended at Chicago and 38th with signs and songs, despite temperatures in the 90º range and a brief thunderstorm.
For now, there are no plans about the long-term fate of the area. Discussions on local social media talk about closing the intersection permanently. Others are suggesting making it a roundabout. But for now, there are no plans to make changes and people continue to come, to visit, to reflect and remember.