At least this is a start? 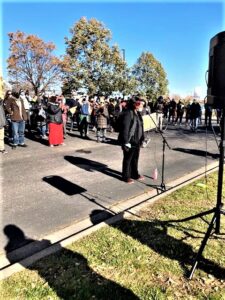 Junail Anderson was one of about a hundred people involved in the sanctuary movement who rallied outside The Extended Stay America Hotel to ask for an extension for homeless people living there. The hotel relented and granted the 60 folks in search of homes an “Extended Stay.”

The Minneapolis City Council just approved a “Tiny House Village” to be constructed inside a warehouse in the North Loop to serve as a transition center for homeless people from encampments to a more permanent situation. I am heartened to see steps being taken to address the growing problem of homelessness, but I also have some concerns.
The tiny homes will be located within a building. This has some advantages such as quick construction as winter is already, and prematurely, here. I am also glad that people housed in this facility will have more privacy and security than those in shelters or in the “Navigation Center” of a few years ago. The initial plan was that it would be possible to take down and reassemble these interior tiny houses as needed at different sites as opportunities and needs shifted. While it’s good that there is long-term planning going into the process, I am concerned that the thought process seems to be that the problem will ebb and flow in the near to medium term. Given the economic forecasts and the fact that the city is not only not creating new subsidized housing and that they are actively privatizing existing public housing, we have to expect a steady growth in the homeless population in the coming months if not years.
There are also very real concerns about the cost/benefit of this plan. The initial proposal was for houses to be built into the Kmart blocking Nicollet at Lake Street, which the city now owns. The city has instead chosen to negotiate to lease a warehouse in the North Loop to house what they are calling “the Indoor Villages project.” This seems like a needless expense in the hopes of leaving the Kmart available for private development. The plan as approved will cost almost $2 million for 100 “houses.” Each house will accommodate up to two people.
This is a concern for me because of how few people will actually be served. The facility is estimated to be able to house up to 200 people at a time, but the encampments at Powderhorn Park alone were estimated to house almost 300 people in mid-July. These numbers are perhaps misleading, however, as part of the goal of the proposal was for this site to serve as a transition point between homelessness and housing support. Hopefully the facility will be able to serve a far higher number of people over time, although it still feels inadequate.

The indoor nature of the facility offers the advantage of protection from the elements, but it also presents challenges. There is some speculation that people are experiencing increased vitamin D deficiency as a result of isolating inside because of the pandemic. On a positive note, there will be on-site management to help people find resources, and hopefully they will be able to provide and encourage the use of a vitamin D supplement for the residents.
There is a lot of potential in this idea, but I wonder if other options were adequately explored.
The biggest lesson from this proposal is the cost of not providing basic social services for our citizens. In the past, this cost has largely been invisible to us; it has been a cost largely born in lack of human dignity and even lives lost for those who “fall through the cracks.” It has also been the cost of lost potential.
We need to do better. At least this is a start?