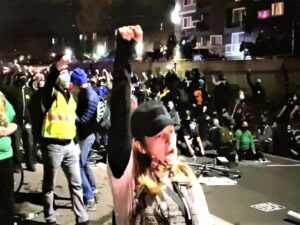 On the night of Nov. 4, 2020, a demonstration took place at Cedar-Riverside in Minneapolis. It was organized by a coalition of groups including Twin Cities Coalition for Justice 4 Jamar and other local peace and justice organizations. The demonstration was held in part as a reminder that no matter who wins the presidency, we will need a strong people-powered movement to make any progress against police brutality. At the end of the demonstration, the group “took the freeway” and marched onto I-94. They planned to get off at the next exit and disperse, but a massive force of heavily armed police officers kettled them in, trapping them on the freeway behind the Cedars 94 apartment building at about 22nd Avenue.
A crowd gathered between the apartment building and I-94 in response to the police action, some holding Black Lives Matter signs. The police maced this crowd and dispersed them. For some reason no such force seems to have been used on the freeway itself. The police arrested all of the hundreds of protesters, in the end blocking the freeway until well after midnight.
I live just a few blocks away and so went down a little after 11 p.m. to survey the situation. The police had formed a perimeter that blocked 9th Street from 22nd Avenue to 24th Avenue. The pedestrian street and sidewalk over I-94 at 25th Avenue was blocked by about four squads on either side. There was a line of heavily armed officers at the freeway entrance off of Butler Place behind Augsburg. When I got home at 12:45 a.m., the freeway was still blocked and there was no indication of reopening it anytime soon.
This was not only an excessive use of force and a very serious threat to our First Amendment rights, it was a colossal waste of money. We have people sleeping in tents through freezing weather and we have a serious budget shortfall as a state due to the pandemic, yet we have the money and resources to pay our armed forces to cosplay a military occupation on our streets. This is nothing short of disgusting and despicable.
The types of equipment used and the variety of armed forces present indicate that this operation can be traced all the way up to Gov. Walz. We need new elected officials, those who recognize that the most humane and cost-effective way to stop protesters from closing down freeways is to substantially reform if not defund our police force. Nothing supports the argument for defunding the police in a more clear and poignant way than deploying such excessive and expensive force in such a disproportionate way in our streets.
The good news is we have leaders to turn to. Many of those leaders were on I-94 that night, I look forward to voting some of them into office soon.