I have seen the future and it’s pretty cool 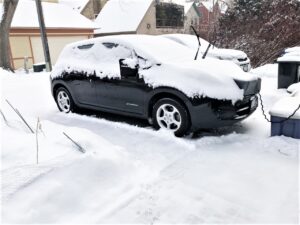 My husband and I bought a car. When we sold our only car five years ago, we knew that there was a good chance we’d need to own a car again someday. Most of our transit pre-2020 was by public transportation. When Covid hit, our habits changed. No longer taking the bus, condensing many small grocery trips into fewer large hauls, and the Target in our neighborhood burning down over the summer led to us buying a car.
We bought an all-electric 2015 Nissan Leaf and it is amazing. It has a slightly greater range than earlier models at about 85 miles per charge. So far, range anxiety has not been a problem for us. We will see how it goes over the winter, but I am optimistic. One feature that is very nice is that the car itself can be turned on to heat up while still connected to power. There is an app that allows one to do this from a cell phone, but until we get that hooked up, we have done this manually in the car and it works great. After five or ten minutes you can unplug it and drive the pre-warmed car without draining the battery with the heater. I know there are similar features for gas cars, but I personally would not use one because of the pollution and the cost of gas. This is not a judgment on anyone who does this—we all have our own tolerances and bugaboos. I’m just weird.
Recently my husband was kind enough to drop me off at a local clinic for a test I needed and he waited in the car. The appointment ended up taking over an hour and I was worried about how cold the car might have gotten and/or how the range would be. On the way home he explained to me that he had decided to look for charging stations nearby because he thought it would only end up costing a few dollars and be worth it. He found one at the St. Louis Park Rec Center, and it was free! He was able to plug in, keep the heat on, and our car was almost fully charged by the time I was done. It cost us literally nothing. Pretty sweet.
On the way home we talked about how awesome it will be when charging stations become more common. Imagine going out to dinner or to visit friends or family, assuming we can gather in public again someday, perhaps to a location that is just on the edge of our car’s range. As long as we know there’s a charging station, or multiple stations, nearby we could theoretically refill our car while at our event. Not only that, but if we get that app working, we can start the car from inside at the end of the evening even if we’ve parked blocks away. The idea seems pretty cool to me.
This may seem like wishful thinking, but more charging stations are coming. Hourcar is rolling out a one-way electric car sharing service in 2021. Part of this plan is installing charging stations throughout Minneapolis and St. Paul. According to early writing on the plan, “At most points within the service area, people will be within 0.3 miles (approximately a five-minute walk) from a mobility hub” (https://bit.ly/2Jc4Dar).
Electric cars offer many benefits. While cleaner air quality and an easier transition to renewables are a couple of obvious ones, electric cars also offer an opportunity to improve our electrical grid. In his book “Unstoppable,” Bill Nye talks about how electric cars can actually serve as backup battery power to “the grid.” Think about how we use cars. We drive them from place to place, but even people who are heavily dependent on cars park them for long periods of time. Cars are parked while people are at work and overnight while people sleep. If all of these cars were electric and charging stations were widely available, customers could agree to allow the power company to pull power from the batteries of the car in response to a surge in demand or an outage somewhere along the grid. The power taken would then be credited to the customers’ electric bill. The combination of such “smart grid” technology with more widely dispersed solar and wind energy would both benefit the environment and stabilize our electric infrastructure.
If you’re thinking about buying a new car, I’d highly recommend exploring the electric car options on the market. I understand electric cars are still unrealistic for many. It was easier for us to consider this type of car than it is for most people, in large part because we have lived for a long time with the limitations of not owning a car and we still have access to car sharing. I am hopeful that the Hourcar electric car sharing and the charging stations will encourage greater interest in electric cars.