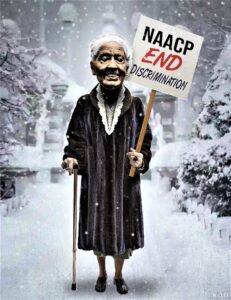 “Unceasing Militant: The Life of Mary Church Terrell” is the newly published biography by Dr. Alison M. Parker, department chair of American history at the University of Delaware. Dr. Parker has righted the historical record by this definitive work about one of the most important, but long neglected, suffragists and civil rights fighters of the 20th century. Not only does Dr. Parker explore the details of Mary Church Terrell’s life, but she includes a contextual history of the actions, ideas and players of the civil rights struggle in each of Mary Church Terrell’s many organizing projects. Known by her friends as Mollie, she was a major star of the human rights fight from 1904 through 1954.
Born in 1863, as the Union Army occupied Memphis, and before slaves were freed there, Mary Church Terrell became one of the major fighters for U.S. and international human rights. Tall and elegant, with an outstanding voice and great wit, she became a great and much in demand speaker. Besides speaking, she helped to organize for educational rights, voting rights, striking cafeteria workers’ rights, African American women’s reproductive health needs and international peace.
Born to enslaved parents, Robert Church and Louisa Ayers, both of whom became outstanding entrepreneurs after emancipation, Mollie was given the best educational opportunities of the time. Robert Church owned bars, pool halls and housing in the section of Memphis that was the birthplace of the Memphis Blues on Beale Street. Louisa Ayers was an on-demand, artistic hairdresser in the upscale shopping section of the city. Her parents’ financial success made it possible for Mollie to have access to the best education of the time. She attended Horace Mann’s Model School affiliated with Antioch College in Yellow Spring, Ohio, and graduated from Oberlin College with a BA (the gentlemen’s curriculum—as opposed to the ladies’ curriculum, which was only two years) in 1884 and an MA in 1887. After college she studied in Europe to polish her already fluent languages: German, French, Italian, Greek, and Latin.
While she is noted for being one of the founders of the NAACP, she is rarely given credit for the Committee of Forty on Permanent Organization that created the NAACP. The same is true for the formation of the National Association of Colored Women (NACW). She was the first president of a coordinated national effort to unite the African American Women’s clubs across the U.S. and create a strong lobbying group for their agendas: anti-lynching, enforcement of the 14th and 15th amendments, sexual stereotyping, housing and sanitation issues, workers’ rights, poorly equipped schools, securing the vote and ending the convict lease system.
By invitation from Susan B. Anthony, Mollie begins her civil rights lecture career with her first public speech before a mixed Black and white audience in Rochester, N.Y., at the Political Equality Club. She was a guest in Anthony’s home and began a friendship that lasted until Anthony’s death in 1906. Although later there was tension in their professional relationship, they often shared a stage at organizing meetings. The Rochester speech began Mollie’s lifelong reputation as an outstanding speaker with great talent to effectively articulate Black women’s political agenda to white and mixed audiences. Another early supporter of Mollie’s speaking talent was Fredrick Douglass. The two often collaborated on political presentations. They worked together organizing Ida B. Wells’ anti-lynching speaking tour in D.C. They also went to speak to President Benjamin Harrison in 1880 to request a powerful, public anti-lynching stand. MCT was such an outstanding speaker that she even earned a living being a major speaker on the Chautauqua circuit. She often shared a stage with Douglass. Imagine being in the audience when Terrell, Douglass and Anthony shared the stage—thrilling!
She moves into the international forum as a much-desired speaker when she is invited in 1904 to speak at the International Congress of Women in Berlin. She delivers her speech in German and in French.
Using her reputation as an advocate for African American women’s voting rights, Mollie was one of the only Black members of the National Women’s Party (NWP). As a lifelong member, Mollie led and participated in many of the group’s lobbying activities. She and her daughter, Phyllis, were part of the difficult demonstration before Wilson’s White House. They were part of the “silent sentinels” risking arrest and violence to demand the vote for all women. Mollie was arrested but not force-fed as were the other leaders. She also marched in and was an organizer for the NWP’s giant suffrage parade. In 1948 Mollie testified before the House Judiciary Committee in support of the ERA on behalf of the NWP.
After a lifetime of work for human rights advocacy and a few months before her 90th birthday, Mary Church Terrell took on another major project: the desegregation of Washington D.C. As one of Mollie’s last leadership acts as the chair of the Coordinating Committee for the Enforcement of the D.C. Anti-Discrimination Laws, she led a picket in 1952 to integrate a lunch counter. After death threats and other violence, the committee tried to dissuade her from leading the picket. One of the other picketers, Marvin Caplan, described Mary Church Terrell’s determination: “Turning a deaf ear to last-minute warnings of the impending race riots and violence that would result, she put on her fur coat, wrapped a scarf around her head, and with a cane in one hand and a picket sign in the other, led the first detachments of pickets in a snowstorm.”
Buy the book! Give it to friends! Mary Church Terrell, The Unceasing Militant, was a great leader. We have her life as a model to continue her work for justice.