Minneapolis needs rent control. It will solve a lot of looming problems but it won’t solve all of our problems. And the more it’s watered down by the city government, the less it will help. Those were the messages in a Zoom webinar attended by over 70 people on Tuesday, Jan. 26.
The rent control panel discussion event was hosted by Robin for Minneapolis. Who is Robin and what is she for in Minneapolis? Robin Wonsley Worlobah is running to be Minneapolis’ first Black socialist City Council member. She is opposing current City Council member and Green Party member Cameron Gordon in the 2nd Ward. Robin was very active in the Fight for 15 and later was a community leader in the George Floyd uprising. 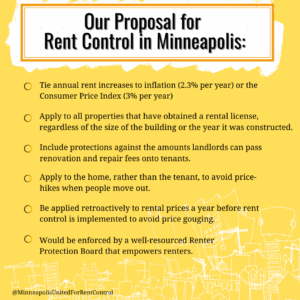 The basis and priorities of her campaign are stated thus on the Robin for Minneapolis Facebook page: “We can win rent control and public safety beyond policing by bringing mass movements into City Hall.” Robin is a member of Twin Cities Democratic Socialists of America (TCDSA). (Note that TCDSA says they have not opened up their endorsement process yet.) Three days before the panel discussion, she was walking the picket line with other TCDSA members in St. Paul Park in support of Teamsters striking at Marathon Refinery. So she doesn’t just talk the talk.
The panel discussion was lively, informative and inspiring. Robin moderated, and the three panelists were Ginger Jentzen (member of Socialist Alternative and former director of 15Now, the organization that won a $15 minimum wage in Minneapolis); Nichole Buehler (executive director of Harrison Neighborhood Association); and Vanessa del Campo Cachon (member of Renters United for Justice and Sky Without Limits Housing Co-op Community).
All three women are also leaders in the coalition called Minneapolis United for Rent Control (MURC). Although they all four (including Robin) work very closely together on rent control, the panelists made it clear they were speaking as advocates of that, and not as an endorsement of Robin’s campaign.
Jentzen kicked off the discussion with an answer to the first question: What makes for successful rent control policy and what are the most important details to focus on? She referred back to how bad the response to the COVID pandemic was, and invited us to imagine how much better it would have been had it been developed by health care professionals. Similarly, now the city has a housing crisis, which was here well before COVID but is being exacerbated by it. This needs a community-informed response.
What makes a successful rent control policy is that it’s based on listening to renters and what they need to be able to stay in their homes. The important detail along the way to achieving it is to recognize that developers and the pundits who love them will lie about rent control and we have to counter those lies. The important detail is to beware of “carve-outs” and developer friendly loopholes.
Nichole expanded on those themes. Examples of carve-outs in rent control include setting the allowable increases at CPI-plus (Consumer Price Index-plus). The “plus” is there to guarantee profit to landlords and developers. Another carve-out is exclusion of single-family and duplex rentals from rent control. This would exclude much of the rental property in North Minneapolis, where housing is most in crisis.
Vanessa focused on how the COVID epidemic is impacting struggling families. People are having to choose between paying rent and eating. Hours are cut, children are at home all day and need care, and in the background, eviction is a constant threat.
In later rounds, Ginger drew a lot of lessons for future organizing in rent control from the successes as well as setbacks and obstacles in the Fight for 15. Nichole expounded on the (hopefully) upcoming charter amendment votes, clarifying that the charter amendments will only open a pathway to passing rent control, but are not a rent control policy in themselves. Vanessa stressed the need to empower those most impacted by the housing crisis to speak and lead, because they are under threats that often make them afraid to do so.
Here are some key points both from the panel and from the document (www.facebook.com/inquilinxsunidxs/posts/3622947001132613) on the MURC Facebook page:
• Rent control must be tied to the property, not the tenant.
• Rent control must be retroactive, to avoid price-gouging.
• It should not have carve-outs for smaller properties but must apply to all properties in the city.
• It should not allow “CPI-plus” rent increases that guarantee profit.
• It should not have “vacancy decontrol” where as soon as a unit is temporarily vacant, the rent can be increased.
• In campaigning for rent control, a lot of myths need to be debunked. A big one is that “Rent control doesn’t work” because rents in rent-controlled areas are “skyrocketing.” (If so, they are rising due to developer-friendly loopholes and carve-outs like those described above.)
• Another myth is that rent control suppresses new housing construction. Data shows quite the opposite.