Kids’ hockey is alive and well at Hiawatha School Park 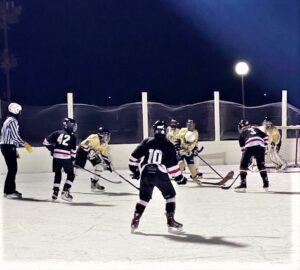 In years past, maybe last century, I drove past Hiawatha School Park after dark in the dead of winter and saw the lights shining on an empty hockey rink—or maybe there was a solitary figure moving across the ice, skating, I presumed. It looked so cold, inhospitable and cruel.
Last Friday, in the year 2021, a couple of 13 and Under (13U) hockey teams got together for a game. With a wind chill below zero and snow blowing across the rink, the Hiawatha Eagles beat the Hiawatha Hawks, bringing the record of both teams to 1-and-1 in head-to-head competition. The Hawks in black and the Eagles in white had full hockey gear, and referees; dozens of fans stood in snow piles and on ice circling the rink to see who would win the second meeting of the two teams this season.
Yes! Outdoor Minneapolis Park and Rec Hockey still exists. When people ask where my son plays hockey, I say, “Did you know there is still park-based hockey?” Lots of people don’t know this. They do know that hockey is an expensive sport, they know that almost all of the public schools in Minneapolis once had hockey teams, but now, well, now people know hockey is more of a suburban sport. So yeah, a few parks around Minneapolis still offer hockey as a winter rec sport to young players.
Not so many years ago there was no hockey offered at Hiawatha School Park in South Minneapolis (42nd Street and 43rd Avenue). Then Aaron Flanders, rec supervisor of the park, decided to bring it back. I’ve been told that the first year several kids signed up to join a team, and composed of varying ages, Hiawatha School Park had one team. The next year, according to Chelsea who is one of the current 13U Hawks team coaches, there were maybe three teams. Now this year, there are five teams: Squirts (ages 6 to 9), 11U, 13U (two teams) and 15U. While COVID-19 has kept some out of hockey this year, many parents and guardians have let their players play. And the players want to in spite of masks and social distancing requirements, which is a little more difficult in their handful of indoor games and practices.
Honestly, right now, as the other 13U Hiawatha Hawks coach, one of my favorite parts of coaching is checking in with our young athletes before the game. I walk around in layers of clothing and a Hiawatha Athletics hoody with a clipboard and pencil, writing down player names and numbers as they arrive at the rink: Axel, Lula, Jackie Boy, Lois … “Hey Will, glad to be here?” Through the mask I hear a mumbled response. I assume it is a positive statement; his dad tells me Will is enjoying hockey. Will is new to the team this year and on several occasions, I’ve seen Will at various parks by himself, with a friend or with his dad, working on his game.
That is what has made this Hiawatha hockey experience so wonderful. Parents are emailing locations of where their players are skating during the day. My son and I use the team email list to recruit players for impromptu pick-up games. Iver has invited my son and me to stop by Longfellow any time after 3 p.m. during the week because that is where he, along with siblings, other teammates and whoever else shows up, will cobble together a game.
The teams at Hiawatha School Park practice a couple times a week and have an eight-game schedule. This is Minneapolis Park and Rec sports. I guess it is what everyone did before indoor ice and associations started organizing four, five or six hockey events a week, or created the year-round model to accommodate the specialized athlete. This is not a complaint against $2,500 payments so your child can play on indoor ice, travel and get really, really good. It is, rather, a celebration of something I think many thought was dead. Park and Rec outdoor hockey is very much alive.
I’m so lucky I’ve been asked to coach hockey. I’ve been working with the kids in the Park and Rec system for four years and my son is 11 by now. But really, coaching isn’t the thing that makes all of this so special.
I feel like we are part of something old and authentic being rediscovered. The program gives kids an opportunity to love hockey. The kids treat each other well. The focus is not on becoming a professional athlete. I feel like we are part of something special, fun and different.
Standing around the boards are parents, friends, siblings, aunts, uncles, coaches, kids from other rinks, kids in figure skates, or kids in snow boots who are there to play in the piles of snow and end up seeing a minute or two of a real hockey game. A hockey game under a dark winter sky, under warm lights.
The other day there was a game before our game and when my wife, son and I got out of the car, a goal was scored. From across the street, I heard the cheer and I asked my wife, “Is that what our games sound like?” She responded, “Yes!” And yes, one team at that time wasn’t cheering, but all of the teams, whether skilled or inexperienced, all have moments when they get to cheer.
This year’s season is winding down. Anybody interested, there’s always next year. It’s $90 (scholarships available). And, as for all Minneapolis Park and Rec programs, everyone’s encouraged to participate.