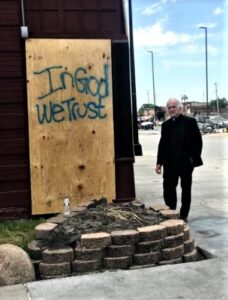 When the going gets tough, the tough get going, right?
Last spring, in the wake of the murder of George Floyd, when chaos and violence erupted on East Lake Street, Father Joseph Gillespie, O.P. (aka: The Patron Saint of Cautious Optimism) of St. Albert the Great Catholic Church, was offered an opportunity to leave the area for a safer location, as others were concerned about his safety. Father Joe’s reply was, “Would a captain leave his sinking ship?”
His history with Minneapolis is long, and his dedication to the city runs deep, having been born and raised here and having built a parish, services and social life on the Southside, in the East Lake Street community.
Father Joe remembers the Lake Street that was thriving with anchor stores such as Freeman’s Department Store, Sears, J.O. Peterson Drug Store, Roberts Shoe Store and manufacturing sites such as Minneapolis Moline farm machinery that employed upwards of 4,000. He remembers the many car dealers, A&W, Bridgeman’s Ice Cream and the days when there was contentious rivalry between the Millers and the Saints (pre-Twins). Lake Street has always been about connections, beginning with its physical framework connecting rivers, lakes and communities, which originally attracted the Dakota and Ojibwa. It also has a rich history of welcoming immigrants: carpenters, tavern keepers, butchers, cigar makers.
Battles need warriors, and appearance to the contrary, Father Joe is a warrior who wasted no time during the riots. While neighbors took to their roofs with water supplies and watched the fires, he was contacted by the Volunteers of America about a group of men recovering from criminal histories. Their shelter was threatened by fire. Father Joe opened his doors. He says he can still picture the men “walking down Lake St. with pillows” toward the church they would call home, temporarily. And he asks, “What good is a church with locked doors?” 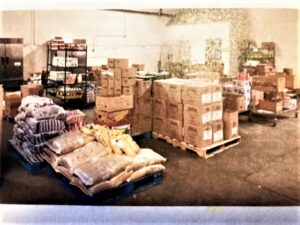 Over the years Father Joe and his parish of about 800 have built partnerships in the community with the merchants and businesses: Peppers & Fries, El Norteño, Midori’s, Merlins Rest, East Lake Liquor, Soderberg’s Floral & Gift, Gandhi Mahal Restaurant, Longfellow Grocery, the Town Talk Diner and Elite Cleaners, to name a few. Father Joe enjoys alaugh, is outgoing and friendly and prefers “engagement over convenience.” He likes being on a first name basis with merchants in the community and points out, “You can’t get that at Wendy’s.” In the face of multiple tragedies, as some of these neighbors lost everything, alliances became stronger. The partnerships came together to raise funds. For example, Peppers & Fries donated 15 percent of sales over six Fridays to St. Albert’s, which helps fund WE CARE, an outreach program supporting those in need via gift certificates for groceries, household items, metro transit, etc. St. Albert’s parishioners also volunteer at a local food shelf in the Longfellow community where canned goods, household items, produce, meat and dairy products are collected for distribution (via the Du Nord Foundation Community Market) on Mondays, Wednesdays and soon to be Thursdays.
Father Joe likes to plant flowers in the spring. Recently, as he potted some beauties around the church yard, he was approached by a stranger who reminded him of the risks of planting too early. Father’s reply, “I have faith they will grow.” For Father Joe this has become a metaphor with regard to the recovery of East Lake Street and its people. He quotes Irish poet Seamus Heaney, “Faith is like walking on water against our better judgment.” Faith is a response, allowing us to navigate rough waters with courage, even when uncertainty abounds. Faith allows us to bend but not break. It allows us to redeem ourselves by caring for one another. Father points out that our faith may be in both science and/or God. Father Joe not only has faith, he clearly accompanies it with action.