One of the tragedies of 2020 was the killing of George Floyd. George Floyd’s murder, caught on video, was one of the worst police killings that America has ever witnessed. I couldn’t imagine this happening in America where I believe the vast majority of people respect human life and dignity. The police officer put his knee on George Floyd’s neck for a full 9 minutes and 29 seconds. While Floyd fought for his life, the officer continued to kneel on his neck, and eventually murdered him.
The next day after he was killed, I was one of the many people gathered in the street where he died even though I knew any of us could be the next victim. And because he was killed in a way that no human being would ever wish, even for their worst enemy, our outrage was magnified. I was mourning as if he was one of my loved ones and I still get emotional whenever I hear his name or see the video of his murder. His death touched me so deeply, and I believe his death touched people’s hearts around the world; in fact, it will change how policing is done. 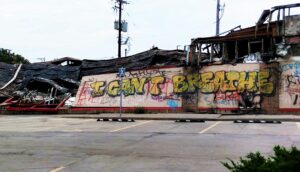 The next day I intended to go grocery shopping on Lake Street, but when I arrived, Wendy’s, the police precinct and Autozone were on fire. It was like a war zone. I was surprised and scared to see angry people burning, destroying and looting the nearby stores. I could see people running away from Target and Cub Foods on Minnehaha Avenue with food, milk, clothes and many more items.
Even though most protesters were peaceful, there were others who were taking advantage of the situation and disrupted the gathering, which twisted what the general public thought of those who only wanted justice for George Floyd. Police were violent toward the protesters and were pepper-spraying them. Maybe the police were scared, maybe they were attempting to protect themselves, but ultimately the police triggered more angry violence and chaos.
All the grocery stores and pharmacies near my area were burnt down or destroyed, so I had to go to other cities in order to buy what I needed despite being told to stay home because we were under curfew. Police for one reason or another abandoned South Minneapolis, so some merciless people took advantage of the situation and broke into neighborhood homes to rob and harm residents. Many residents close to the Lake Street area had to flee for their safety, which reminded me of the civil war in Somalia. Civil unrest and societal breakdown can happen anywhere and to anyone. Even though you have peace today, tomorrow might be different. We need to cherish peace and stability, not take it for granted. If you have difficulty relating to this, it might be hard for you to understand, but you are one of the few fortunate ones in this world.
The city of Minneapolis became a ghost town and unrecognizable within a few days, ashes and burnt buildings could be seen on every street. Small business owners, mostly immigrants, lost everything they had struggled to build for such a long time. The situation was so out of control. Yet, we could see people, no matter their race and color, coming together to mourn and help each other. There was love between the communities of Minnesota. Grocery bags and food were left on the streets for the people who were impacted. This shows me how similar we are when tragedy happens.
While these small businesses are still trying to recover from the 2020 unrest, Daunte Wright became yet another victim of a police killing. Small businesses around Seward Market and Lake Street areas in Minneapolis are once again the victims of looting and vandalism. One close friend of mine, a Somali business owner, had opened his business less than a year ago near Seward Market. He closed his store at 9 p.m., April 12, and went to his house nearby. A few minutes later, a friend called to inform him his store was being looted. He said he ran there, but it was too late. Shattered glass was strewn all over the floor; his business computers and everything else were broken. He had put all his efforts into building this business, which is his only income, and now it’s gone, leaving him in a precarious situation with a complicated insurance policy. This is one of many stories of Somali businesses that have been looted or vandalized in Minneapolis as a byproduct of unreasonable police brutality. With the conviction of Derek Chauvin for the murder of George Floyd, we have reason to hope for change. We can anticipate being safe and able to shop in our own neighborhood; we can foresee better days ahead for our community.