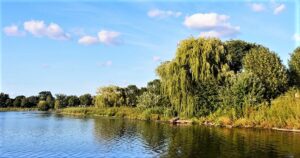 Lake Hiawatha is a valuable resource to the South Minneapolis community, but it has suffered over the last couple of decades with a trash problem. Neighborhood groups have valiantly worked to keep this lake clean, but the health of this lake requires a trash mitigation strategy that involves government entities with long-term solutions.
A successful trash mitigation effort must be untied from other projects, with a focus on researching and implementing solutions as smaller, stand-alone projects that can be done right now. This approach would, more quickly, make progress towards less and less trash entering Lake Hiawatha, rather than the current approach which ties this cleanup to massive projects. Also, this cleanup needs to be led and funded by the entities that are responsible for the trash, starting with the city of Minneapolis.
An initial important step would be to install a grit chamber at the intersection of East 43rd Street and 19th Avenue South to capture trash before it travels through a pipe under Hiawatha Golf Course to Lake Hiawatha. This would allow the city of Minneapolis to capture and remove its trash as it does with other grit chambers in the city.
Charles Rodgers, candidate for Minneapolis Park Board Commissioner in District 5, sees this as an important agenda item that he wants to pursue if elected Commissioner this fall.
Note: The main sources of trash in Lake Hiawatha are:
– City of Minneapolis storm sewer outfalls (pipes) releasing directly into Lake Hiawatha.
– Minnehaha Creek and the storm sewer outfalls that release into Minnehaha Creek.