Nicollet Avenue: What’s going on and on? 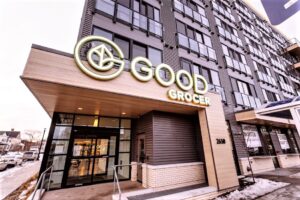 A year ago, we wrote in Southside Pride (southsidepride.com/2020/06/22/how-has-nicollet-avenue-fared-so-far/) about the massive damage to buildings and businesses near Lake and Nicollet, as determined protesters laid siege to, but did not succeed in destroying, the 5th Precinct police station.
Here’s a list of the top five things we did not expect to be the case in June of 2021:
– The pandemic is going strong, although infection rates and deaths are diminishing, even though we have had vaccines for almost six months, and Minnesota has achieved pretty good vaccination rates.
– Still, mask usage is scaling back, and mask mandates are almost over.
– The local elections are dominated by police defunding and rent control — and there is more agreement over rent control!
– The No. 1 thing we didn’t see coming — the Kmart was supposed to be demolished by now, but we can’t do that yet because now it’s a post office! 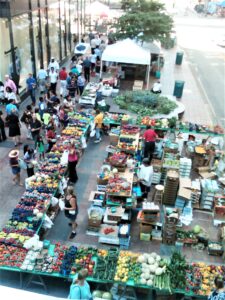 The farmers’ market on Nicollet Mall

We’ll just take a look at the situation now on Nicollet Avenue, from the Mall downtown, to Eat Street, and through the neighborhoods right to the city line. Let’s start with groceries. Within our designated area, there are two farmer’s markets. The Nicollet Mall Farmers Market is back this summer, with the addition of a “Makers Market.” You’ll find this on Thursdays, most of the length of the mall. EBT and credit cards are accepted by most vendors. The Kingfield Farmers Market, at 4310 Nicollet Ave., opened in mid-May and runs on Sundays, 8:30 a.m. to 1 p.m., through the end of October.
There is the Cub Foods we talked about last year for your major shops. Cub uses Instacart for delivery. And then, at the south end of Eat Street, there is Good Grocer, which was covered separately by Southside Pride in March of this year (see southsidepride.com/2021/03/01/a-new-good-grocer-does-good-on-eat-street/). In addition to these sources, Eat Street has numerous small family groceries / convenience stores, most of which carry ethnic specialties of some type, and a number also source halal meat products.
There are many services on Nicollet, especially health care, dental, and wellness services. I want to shout out for my primary care clinic, Whittier Clinic, part of Hennepin Health Care. Also, a couple of my good friends swear by Lifeforce Chiropractic and Acupuncture at 37th and Nicollet. There are quite a lot of dentists, too, but I’m still shopping for my forever dentist, so I can’t recommend any of them yet. Maybe next year. There are possibly too many hair salons, spas, and the like to get into that, and in any case, I haven’t tried any of them yet either. 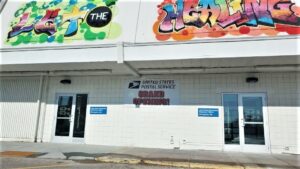 So, a post office in a Kmart. It’s actually two separate post offices. Because not only was the Whittier post office (55408) burned down, but so was the Longfellow post office (55406.) Friends have gone there and given good reviews for quick service (no long lines). And to tell the truth, if you didn’t know, you’d never recognize this as a former Kmart. You’d just wonder why a post office has such a huge parking lot.
Retail along Nicollet Avenue tends to the shabby chic of second-hand: B-Squad Vintage, Old School (formerly Steeple People and also in a different location), b.Resale, and Cheapo Records. If you’re looking for a retro-chic summer outfit, check out B-Squad, at the corner of 35th and Nicollet. They have a great selection of vintage clothing, jewelry, and décor items, as well as vinyl LPs and even 8-track players and cassettes. They’re open Wednesday through Saturday from noon to 7 p.m., and Sunday from noon to 6 p.m., and they’re available to buy on Wednesdays — you can either stop by the store or make an appointment. Old School sells gently used housewares and furniture to fund housing and houseless services. B. Resale sells (and buys) “streetwear.” Their website says walk-in selling will resume June 29, but you can still do it by appointment if you prefer. 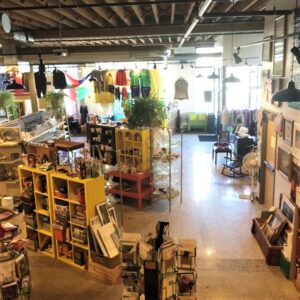 There are a number of nonprofits along Nicollet, some old and traditional, others new and innovative. In the old and traditional category is St. Stephen’s Human Services. This group separated from its parent, St. Stephen’s Catholic Community, some years ago and is primarily known for providing all kinds of services for homeless people. They operate a shelter, run a “street team” of emergency social workers, and publish the famous Handbook of the Streets, a guide to human services of every kind. They have been even higher profile than usual due to the crisis of homelessness colliding with the pandemic and uprising.
The Music Box Theatre at 1400 Nicollet Ave. is an example of a church that purchased an historic building and made it into a nonprofit, a performing arts venue in this case, while also providing itself an additional inner-city campus. Their website says, “In 2016 the Music Box Theatre was purchased by Wooddale Church who has invested in restoring the historic property to preserve and enhance the legacy of the theatre and its impact in Minneapolis. The Music Box Theatre is now open for a variety of performing arts, community development programs and is home to Wooddale Church’s Loring Park campus. The future is bright for this amazing landmark theatre in downtown Minneapolis!” 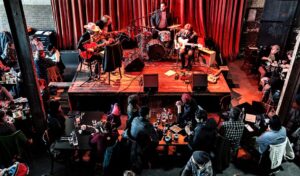 The performing stage at Icehouse on Eat Street

The Good Grocer that we mentioned above is an example of an innovative nonprofit in that it sells groceries at a significant discount to volunteering “members” and uses mostly volunteers for staff. Another such example of innovation is the Minneapolis Toy Library at 60th and Nicollet Avenue. Check out their services at mplstoylibrary.org. Of course, cleverly filling unfilled niche needs is not restricted to nonprofits. Near Nicollet Avenue, at 3229 Holmes Ave., is a very interesting craft brewery called Hairless Dog. All their beverages are 0.0 ABV (alcohol by volume). This sounds very much my vibe, so I am planning to check them out.
To circle back to housing for a moment, in one of its last stories, Southwest Journal wrote in October 2020 about a five-story apartment block planned for the previous site of Curran’s restaurant, which closed last summer. Demolition was supposed to have taken place by now, but it has not. So watch that space. Meanwhile, just across the road, another one is going up now.
Nicollet Avenue is particularly blessed with a huge variety of eating and drinking establishments. After all, a fourteen-block stretch of it is called Eat Street. There are too many eating places there to list them all, so here are my favorites and some of my friends’ favorites. Nicollet Diner is good simply because it’s open 24 hours and we need more of that. This summer, after a refit, they are moving into the vacated Ichiban space, and expanding to add a cabaret and a rooftop patio. 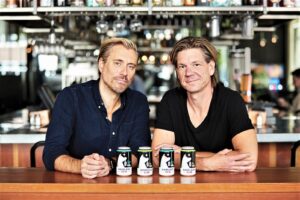 The founders of Hairless Dog with some of their brews

Eat Street is your go-to place for all manner of Southeast Asian or Chinese cuisine, since we don’t have a Chinatown here. Quang, Pho 26, Jasmine 26, and Rainbow are some favorites. Ichido Ramen adds the Japanese element. Pimento is a Jamaican-influenced eatery that operated as a mutual aid kitchen during the uprising, so kudos to them and their crew, both employees and volunteers.
Lu’s Sandwiches gets points for its straightforward name, and I hear the sandwiches live up to it. Glam Doll Donuts gets points for its quirky name (and besides — mmmmm donuts!) Black Sheep Pizza is a modern pizzeria and a touch more chic than a lot of Eat Street. Wear your best jeans.
Outside of Eat Street, which is to say, south of Lake Street, the dining establishments are more spread out, but still plentiful. I’ve only been to Hola Arepa once, but I’m still raving about it. Yet another very good ramen place — Ramen Kazama. Yet another Japanese place — Kyatchi. And a notable reopening at 38th and Nicollet — Petite Leon, mentioned elsewhere in this paper, in The Dish. 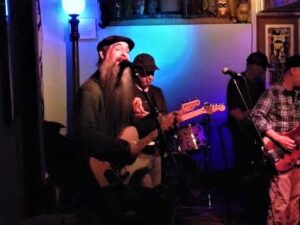 The Butter Bakery Cafe is noteworthy for its yummy baked goods, its B Corp status due to also running a youth jobs program, its pre-COVID (hopefully coming back) live music, and its showcasing of local artists and projects. (If you don’t know what a B Corporation is, check out the entry on Wikipedia.)
Speaking of live music, two places on Nicollet Avenue hail the return of indoor live music in their spaces! One is on Eat Street — that’s the Icehouse. It’s mostly popular with younger fans, but I hope to get by there soon. The other—and I can’t believe I still have never gone — I expect caters more to my fellow boomers. This is Driftwood Char Bar, which on Sundays hosts a Grateful Dead tribute band. But they have other live music too. Check out the Icehouse’s website for its schedule, or for Driftwood Char Bar, either its website or Facebook page.