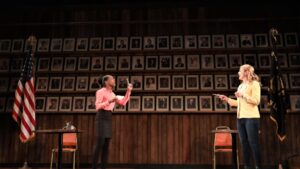 ‘What the Constitution Means To Me’ at the Guthrie

Downtown at Chicago Avenue’s northern terminus, the venerable Guthrie Theater is cautiously reopening. I have really ambivalent feelings about entertainment happening while the pandemic is in the situation where there are no ICU beds available, and kids are having to go back to classes with nothing more than an ill-fitted mask and a prayer. But on the other hand, I love the arts institutions that give our cities their cultural energy and I don’t want them to disappear. It’s a puzzlement.
The Guthrie is having a small, one would almost say tentative, schedule for fall and winter, and a more ambitious, hopeful one in the spring. Masks are required for the audience, and either proof of vaccination or a negative COVID test within the past three days. However, the COVID information page states – all theaters will be sold to capacity with no social distancing.
The first show, Sept. 30 through Oct. 24, will be Heidi Schreck’s award-winning “What the Constitution Means to Me.” The theater blurb notes it is “the first stop on the national tour of this timely and galvanizing work.” Then, from Nov. 6 to Dec. 27, there will be a season of “A Christmas Carol,” in an adaptation by Lavina Jadhwani and directed by Joseph Haj. Another tried and true old favorite, “A Raisin in the Sun,” by Lorraine Hansberry, runs Jan. 8 through Feb. 12.
Bridging the time through the end of winter into early spring, Feb. 26 through April 16, is a show I may go see, if nobody has died, especially me, and the Guthrie is still plunging ahead with their announced schedule. It’s only one of my favorite Shakespeare plays, “The Tempest.” This show has a gender-twist by having the aging magic worker, sibling to the villain Antonio, parent to the innocent, kindly Miranda, to be Prospera, Duchess of Milan. Former artistic director Joe Dowling returns to the Guthrie as director. 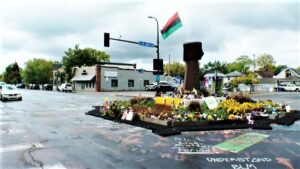 A new restaurant launched by the Farmers Union, called Farmers Kitchen + Bar, has opened in the space formerly occupied by Spoonriver. Another place within walking distance of the Guthrie for pre-show dinner is Sea Change; in fact, it’s in the same building. But I would suggest, although you have to make reservations at least a month in advance, that you walk a few more blocks and dine at Owamni, with the “de-colonized” menu of Sean Sherman, the Sioux Chef, in the Waterworks Building at Mill Ruins Park.
Another thing worth going downtown for is – counterintuitively perhaps – grocery shopping. There is a Trader Joe’s at the corner of Chicago Avenue and South Washington Avenue, on the ground floor of a fancy apartment building. There is actually sheltered free parking there, and if you’re not driving, it also has bike parking, has a bus stop right outside, and is only two blocks from the U.S. Bank Stadium LRT station.
There is an interesting new form of using community space going on at the site of the former Roberts Shoe Store at Chicago and Lake Street. After the building that used to house Roberts burned down in 2018, the lot was cleared, and then in 2020 a neighborhood nonprofit called the Graves Foundation purchased the land to prevent it from falling into the hands of deep-pocket developers intent on gentrification. But it hasn’t been sitting idle since then, especially since the pandemic started. In June of this year, a small group called the Lake Street Truth Collective emerged with a mission to heal trauma, build community, and do art. They work with the foundation to maintain and beautify the lot and use it for a variety of purposes and events.
Weekly occurrences through the summer months were the Truth and Repair Dinner and Conversation events. Additionally, they have hosted zine workshops, poetry readings, performances of various kinds, dance parties and variety shows. They will probably be winding down when the weather gets too cold, but plan to be back next year with more of the same. Check out @lakestreettruth on Instagram to keep up with events, read their History of Lake Street posts, and donate money through GiveMN. 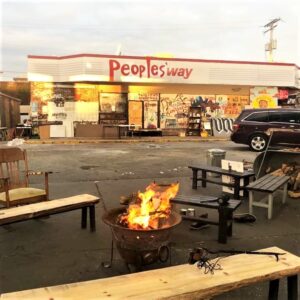 In the stretch between Lake Street and George Floyd Square, there are a number of beloved businesses and organizations that we checked up on. A couple of blocks south is the Modern Times building, which we at Southside Pride call “the office.” Our “employee break room,” which you may know as Modern Times Cafe, is in takeout-only mode, but it’s still worth the trip. There are a few picnic tables on the sidewalk patio in front and many more in the parking lot big-tent patio in back. They’re slowly bringing back their famous hash browns.
There is a good bike shop at 3515 Chicago Ave. – Full Cycle. They are more than just a shop – as the website puts it, they “connect with and support youth experiencing homelessness and our community through bikes, business and relationships.” One way they do this is through a paid internship in bike mechanics. Prior to COVID, they ran both a repair shop and a used and rebuilt bike retail operation, but now they are confining it just to refurbishing used bikes. Some are sold, and some are given to homeless or recently homeless youth. Full Cycle has a reputation for not being condescending bike nerds and giving people really great deals on used bikes. 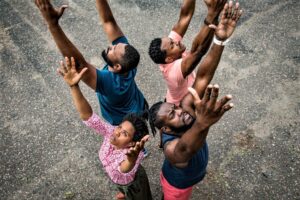 ‘What To Send Up When It Goes Down’ Pillsbury House Theatre

Also on this block is the long-time community resource retailer StevenBe, purveyor of yarn and thread and all sorts of paraphernalia used in knitting, crochet, and other fabric arts, as well as kits, and some finished products. They also have “open knitting” groups that meet in person for coffee and crafting.
Pillsbury House, like the Guthrie and other performance venues, is cautiously returning to active status. Sept. 18 through 28, they will present “What to Send Up When It Goes Down,” by Aleshea Harris. Also, three 2021 Naked Stages Fellows were announced and the Naked Stages performances are scheduled for mid-December. See the website for details and tickets.
George Floyd Square has been partially reopened to vehicle traffic. I say partially mainly because my beloved Route 5 bus still doesn’t go through there. Nor does the Route 23. I totally support the idea of keeping the space sacred, quiet, safe, and controlled by and serving local residents. But how does that end up meaning accommodating cars but not buses? Just a thought. 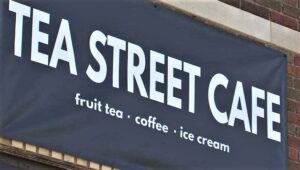 One new development since the last time I was there is the Tea Street Cafe in the former Blackeye Roasting space. This quiet, unpretentious cafe, with outside and inside seating, Wi-Fi, and a community bulletin board, is co-owned by Maggie Sponsel (chair of CANDO neighborhood board) and Rashad West (owner of nearby Dragon Wok).
The former Speedway seems to be the main hub of the community. Benches and chairs are circled around an outdoor rug, giving the feel of a living room without walls. A small shed houses the community free library. Here and there, garden produce is laid out for free taking.
The various shrines, artworks and tributes are very well maintained, and seem to be the attraction for “tourists.” It was a quiet Sunday when I was last there but there were several parties of people meditating quietly, viewing the art and plants, and taking snaps of each other with their phones for a keepsake.
Just south of George Floyd Square is Calvary Lutheran Church. They were doing a lot of heavy lifting in the mutual aid arena during the uprising in the summer of 2020. They have had for years, and still have, a weekly Saturday food shelf. Most of their other mutual aid missions have ceased as things have “returned to normal.” 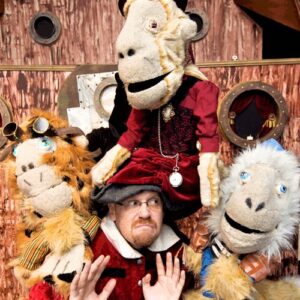 The final organization I’m highlighting is another performing arts entity – Z Puppets Rosenschnoz, which, when it had an office, was at 4054 Chicago Ave. Although Google maps identifies this address as “temporarily closed,” Z Puppets has remained remarkably active through much of the past year and a half, considering what a small organization it is. Check out their website zpuppets.org for complete details about what they’re up to, but two of their current programs bear mentioning.
The first is “Say It! Sing It! Play It! In Cherokee!” Designed for young audiences of three and up, this performance contributes to teaching the endangered Indigenous language of the Cherokee, with songs, stories, counting and funny animals. This is available now as an outdoor performance and will be available virtually in the fall, with an option to have a live intro or meet and greet with the performers.
The other highly praised performance is called “Monkey Mind Pirates.” The website explains it: “Dive into this award-winning musical tale of a sea captain navigating the stormy seas of stress to tame the Monkey Mind Pirates. Turn your family’s ‘Arrghs’ into ‘Oms’ with fun songs, lovable characters and playful approach to yoga and mindfulness.” These and other shows and workshops are available for festivals, parties, classrooms or virtual field trips.