What will be your place in history? 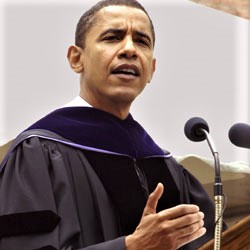 In 2005 the junior senator from Illinois – then in office for just six months – gave the commencement address at Knox College, a small liberal arts school in western Illinois. It was a speech whose themes would define his career.
Knox and the city of Galesburg were co-founded in 1837 by religious abolitionists from upstate New York. These settler-colonists broke the prairie under the radical demand of college for all regardless of income or race, and that every form of slavery was evil. Commencement is always held on the South Lawn of Old Main, the only extant building from the Lincoln-Douglas debates.
On the South Lawn that morning was me, Devin Hogan, age 20, a sociology and journalism double major steeped in the muckraker traditions of my classmates a century prior. Coined by Teddy Roosevelt as an epithet, these “muckrakers” used the power of story to inspire Americans to push their government for good. To protect people instead of exploiting them.
On that sunny Saturday in 2005 Barack Obama asked: “What will be your place in history?”
These were the headiest days of the George W. Bush era, some 11 weeks before Hurricane Katrina. It was refreshing to hear the senator push back on the individualistic Ownership Society and plainly state how the government created and sustains the middle class: “Because individual salvation has always depended on collective salvation.”
He closed with a history lesson. 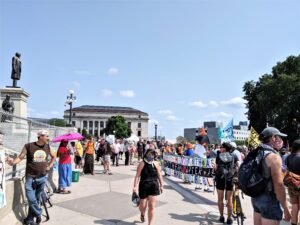 At the Water Protector march and demonstration at the State Capitol on Saturday, Aug. 28, more than 20 co-sponsors sent marchers and banners, and some erected information booths. There were a dozen or so tipis on the grounds, and dancing and drumming. After the rally at the Capitol, marchers went down Summit Avenue to talk to Gov. Walz about stopping Line 3. He said he had already talked about this several times over the past few days, but Native American demonstrators said, “He hasn’t talked to us.” In all, 69 people were arrested for wanting to speak with Gov. Walz.
(photo/Debra Keefer Ramage)

“Here in Galesburg, the main depot for the Underground Railroad in Illinois, escaped slaves could roam freely on the streets and take shelter in people’s homes. And when their masters or the police would come for them, the people of this town would help them escape north, some literally carrying them in their arms to freedom.”
Breaking the law – on purpose – because it was moral and just. Because it was the right thing to do! “Because they knew that we were all Americans; that we were all brothers and sisters.”
This American spirit still lives on in all the civil rights movements to this day, Obama said, through what John Lewis and now the rest of us would call Good Trouble.
“Generations who have come before you faced these same fears and uncertainties in their own time,” Barack Obama said. “And that through our collective labor, and through God’s providence, and our willingness to shoulder each other’s burdens, America will continue on its precious journey towards that distant horizon, and a better day.”
Three years later the senator took heat over the rhetoric of his longtime pastor, Jeremiah Wright, who had characterized 9/11 as America’s imperialist “chickens coming home to roost,” and exclaimed “God Damn America” in a viral clip repeated ad nauseum.
In a groundbreaking speech called “A More Perfect Union,” Obama contextualized and condemned the language of his pastor while standing behind him. Still under pressure some 11 weeks later, the senator denounced the “divisive” man who had married him and Michelle and left the church.
Reverend Wright’s 2003 Palm Sunday sermon is still relevant.
It begins with the arrival of Jesus in occupied Palestine, who wept because his followers could not see the path to peace under the stress of their conditions. “Colonization does not make for peace. Occupation does not make for peace, and subjugation only makes for temporary silence. It does not make for peace.”
Wright spoke of confusing God and Government. That “we believe in this country, and we teach our children that God sent us to this ‘Promised Land’” to pillage and steal from the Indigenous nations. “We believe God approved segregation. We believe God approved Apartheid, and a document says ‘all men are created more equal than other men.’”
Wright said we cannot confuse Government and God because governments lie, governments change, and governments fail.
“America failed. She put them in chains. The government put them in slave quarters, put them on auction blocks, put them in cotton fields, put them in inferior schools, put them in substandard housing, put them in scientific experiments, put them in the lowest paying jobs, put them outside the equal protection of the law, kept them out of their racist bastions of higher education and locked them into position of hopelessness and helplessness. The government gives them the drugs, builds bigger prisons, passes a three-strike law, and then wants us to sing ‘God Bless America.’ No, no, no. Not ‘God Bless America’; God Damn America! That’s in the Bible, for killing innocent people. God Damn America for treating her citizens as less than human. God Damn America as long as she keeps trying to act like she is God and she is supreme!”
On the night the Third Precinct burned I watched the Unicorn Riot livestream, where Nico was asking members of the crowd why they were there. Young people appeared consistently on camera, many likely South High students or Roosevelt classmates of now-Pulitzer winner Darnella Frazier. Families. Black, brown, white and Indigenous people. The multiracial working class. People who look like America.
They were beaming – every last one – as if a message might have finally broken through. For real this time. These kids from the neighborhood didn’t bring the matches but that doesn’t matter. They saw the clarity of purpose and intrinsically understood the moment.
All night long, one after another, each stated some version of the same thing. This is where I live. I belong here. I am meant to be here tonight. This is part of my destiny. I am here to take my place in history.
I vowed never to betray the meaning of this moment for them. To not waste the international solidarity and global goodwill the way 9/11 was frittered away in fear and sold my generation down the river. Whose chickens had come home to roost as our hardened, hypermilitarized police.
“The true test of the American ideal is whether we’re able to recognize our failings and then rise together to meet the challenges of our time,” Barack Obama said on that sunny Saturday in 2005. “Whether we allow ourselves to be shaped by events and history, or whether we act to shape them.”
The eyes of all people are upon us. Minneapolis can never be a City upon a Hill because only God is divine.
Minneapolis can be a depot. Minneapolis can live up to the promise of its motto: En Avant. Forward.