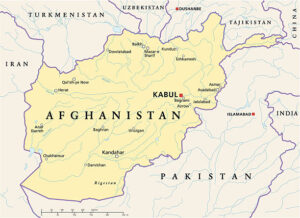 Rep. Barbara Lee is having a well-deserved moment as the sole congressperson to have voted in 2001 against the Authorization for Use of Military Force (AUMF), which granted war powers generally held by Congress to the president of the United States. Twenty years of war has long since vindicated her position, but the rapid takeover by the Taliban in the wake of the U.S. withdrawal has amplified Lee’s prescience and courage to stand up against the overwhelming push for vengeance in the wake of 9/11.
We were warned that there would be no easy victory, probably no victory at all, and that the idea of bringing Afghanistan democracy through military intervention was unrealistic at best. As early as the Sept. 13, 2001, episode of Democracy Now!, Howard Zinn was referencing the drawn-out war in Vietnam as an historical point of comparison to the likely outcome of the contemporary passage of the AUMF. Twenty years later the comparison seems obvious. Even ahead of the dramatic fall of Kabul there was a sense that the Taliban would eventually regain control, but the expectation was that it would take months, not days.
Now, we watch helplessly as horrors unfold. Corrupt officials fleeing with bags of money, people hanging onto the outside of airplanes as they take off from airports, Afghan women targeted by the Taliban. We should have seen this coming, we should have done better. But we didn’t do better because to do better is not politically expedient. To do better is not profitable or flashy. We are a country whose leadership looks for easy evasions over tough solutions.
There are other warnings we have ignored for decades that are now bearing out. We have been warned for years about the instability and extreme weather events that would be caused by climate change and are now seeing them clearly manifest on the ground throughout the U.S. and around the world, in some cases even worse than expected. Reports released this summer by the Intergovernmental Panel on Climate Change (IPCC) confirm that the catastrophic impacts of human-induced climate change are already here and that at this point we must work to drastically curb carbon emissions, with the UN Secretary General saying the report was “a code-red for humanity.”
And yet, despite these dire warnings, we see the same business-as-usual attitude in Washington, D.C. The Democrats are likely to lose control of the House in 2022, making any progress on the existential issues facing our world virtually impossible. But even with the Democrats holding a majority, if a slim one, in both chambers with a Democratic president there are still obstacles within the Democratic party. Most notably Sens. Joe Manchin and Kyrsten Sinema seem hell-bent on preventing legislative wins that will not only help the party win future elections, but also on gambling the future of civilization, as we know it, away.
In the meantime, we are witnessing predictions play out in Afghanistan. To their credit, once faced with those horrors in reality, politicians seem to be able to find their conscience and act. A group of 46 senators recently signed a letter urging the Biden administration to allow an expanded group of Afghan refugees into the U.S. through a specific humanitarian parole category. This would allow women in leadership roles, journalists, and others who are at grave risk under Taliban control but who do not qualify for the Special Immigrant Visas (SIVs) available to those who worked directly with the U.S. government or associated entity for at least two years. While there is some hope to be found in the three Republican senators who signed the letter, I can’t help but note the seven Democratic senators who did not sign it.
Meanwhile the right wing has been pushing anti-immigrant sentiment and xenophobia more than usual. Tucker Carlson has warned that Afghan refugees would constitute an “invasion” and Marjorie Greene has bemoaned the possibility of an Afghan refugee making their way into elected office à la Ilhan Omar. Remember when we invaded Afghanistan to bring them democracy? What a lie.
We are lucky that we do have Ilhan Omar, who has, along with The Squad, mirrored the thoughtfulness and courage demonstrated by Barbara Lee decades ago. Just as we face the aftermath of our occupation of Afghanistan, we also face the challenges of the climate crisis, long overdue action on racial justice, and growing economic inequality. Business-as-usual politics has kicked the can down the road for too many years. True political courage is needed now – the courage to stand up against the worst aspects of American xenophobia, the courage to stand up to financial institutions and political donors who benefit from the destruction of our planet, and to make policies that strengthen the middle class and racially equitable access to wealth.