Getting dark and philosophical about the holidays 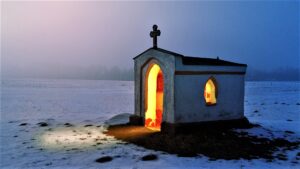 The title of this article is meant to gently lead you into a dark place. If I had titled it “Dying During the Holidays” you probably would have skipped it, right? Sorry about that. But now that you’re here, let me explain.
If you’re one of my regular readers or friends, it probably won’t surprise you to learn that I was a deeply weird kid. It’s considered cute nowadays, but it wasn’t at all cute in the 1950s. One of the ways I was weird was that I thought about death a lot. And not because I had much experience with it – it just arose from somewhere deep in my childish soul, usually when I was supposed to be falling asleep at night.
One of the many things I brought myself to tears about (along with thoughts of lambs to the slaughter, or how some kids lost their mothers while they were still kids) I worried about people dying right before or in the middle of an anticipated celebration, like Christmas. Because even as a very little one, I realized people were dying all the time, so some of them had to die on Christmas! (Also, as a white Christian American child with very conservative parents, I thought the entire world celebrated Christmas.)
It turns out that some social scientists pondered this too, but from a public health perspective rather than from an insomniac sentimental child perspective. And they didn’t start with Christmas at all, but with three other times that constitute “ceremonial” events. 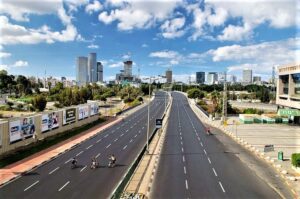 The earliest study I found (in a very lengthy but not at all academically informed search) was a 1973 study by two sociologists of death trends around the decedent’s birthday, around the presidential election in election years, and around Yom Kippur, also known as the Day of Atonement. I’ll say more about that below, but for now, let me mention that the authors of this study were David Phillips and Kenneth Feldman of State University of New York (SUNY) Stony Brook.
The first study I found, however, was quite recent – from 2010 – and did concern Christmas, as well as New Year’s Day and the interim week. The authors of this study were David Phillips, Gwendolyn Barker and K. Brewer, of UC San Diego, and this study found a spike rather than a dip in certain types of deaths on the target dates.
Noticing the same name leading both studies, and that the David Phillips of UCSD was earlier at SUNY Stonybrook, I surmised this might be the same person, and it was. I eventually found a piece from the Los Angeles Times in 1992 about Phillips, who even then had the nickname of “Dr. Death,” and had published numerous, often controversial, studies on what he was postulating was a behavioral timing of death in various populations and for different cultural reasons.
Among the many correlations Phillips studied over the years, was a spike he found in suicides following any highly publicized celebrity suicide (1974), that more American women die the week after their birthday than normal, while American men do the same but the week before (1992), that Jewish men (but not women) “postpone their death” until after Passover (1988), that elderly Chinese women (but not men) do the same in relation to the Harvest Moon Festival (1990) and that there was a big spike in fatal medication errors every year for decades around the first of every month (2004). 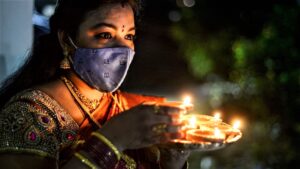 In the Passover study, Phillips’ co-author was Elliot King, also of UCSD, and a 2014 piece in The New Republic stated, “Phillips and King conclude, ‘that the “will to live” is associated with reduced mortality, and that communal social events can have a beneficial impact on the course of disease.’” This seems to be the driving factor in Phillips’ research and academic career. He began with the simple question of whether being embedded in communal life, which is characterized in part by placing meaning in public ceremonies, whether religious or secular, made a difference in health and mortality, and he ended up focusing on trends in the timing of death.
To go back to that 1973 study as promised, recall that data processing technology was still more or less in its infancy then. The worldwide web was a decade in the future, and “computer” meant a large room filled with hard-wired components that took an hour to do what your cell phone can do in a nanosecond.
Thus the data selection will seem impossibly crude by today’s standards. For determining whether there is a “death-dip” before the birthday, the researchers used data from an almanac of famous Americans (bet you anything they were 90% or more white males) and a sample size of just over 1300 subjects. They justified using “famous” Americans because it was not even possible to gather birth and death dates for a large, random sample of people. 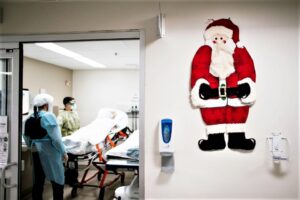 Christmas in the ER

For data selection on the presidential election’s hypothesized “death-dip,” at least here they could use public statistics, and from the entire U.S., since they were interested only in the death date, and not birth date or any demographic factors. The years examined were presidential election years and the years before and after each one, as controls, from 1903 to 1969. In both of these cases, a “death-dip” of significant size was found.
But the one we’re most interested in, because it’s a holiday (albeit a fall one, not a winter one) is the Yom Kippur data set. Note that Dr. Phillips collaborated on another study of a major Jewish holiday somewhat later, when he tested whether Passover was associated with “postponed death.” In both studies, the ideal would be to have a large sample of people who were 1. Jewish, 2. noting whether they observed the holiday, and 3. divisible by gender and age. We can compare the data selections of the two studies to see how data tools had progressed in the intervening 15 years. (In neither case was the data he wanted easily enough obtainable, although items 1 and 3 probably would be today, and a global average could be used for item 2.)
In 1973, Phillips and his collaborators solved the problem of Yom Kippur being specific to Jews by using statistics from New York City only, which was at an average of 28% Jewish during the years sampled, 1921 through 1969. They then added an extra layer of validation by seeing if results using Budapest in the years 1875 to 1915, where the proportion of Jewish residents to all residents was similar, corresponded closely. (It did.) 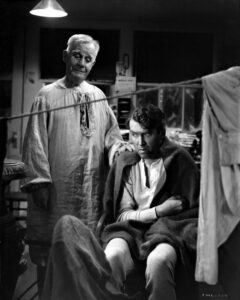 The Academy of Motion Picture Arts and Sciences will examine the technology behind “It’s a Wonderful Life” at Los Angeles and New York City screenings on Friday, December 9, and Monday, December 12, respectively.
Pictured: Henry Travers and James Stewart in IT’S A WONDERFUL LIFE, 1946.

Another problem with data in the early 1970s was its lack of granularity. Death statistics were only compiled monthly, whereas the holiday “moves around” due to the use of a lunar calendar. To remedy this, they had to cut the data more. They counted only years where Yom Kippur fell within a week either way of the end of September. The rate of deaths in September of these “Y years” could be expressed as a fraction of the number for the whole year. And finally, the control, since Yom Kippur comes every year, to “eliminate” any merely seasonal effects, was to compare a similar rate for the U.S. to the rate for just New York City. A definite “death-dip” was discovered.
In 1988, when Phillips and Elliot King studied death rates around Passover, things were a bit easier. Personal computers were still a relative rarity but at least you didn’t have to submit massive decks of punch cards to run your statistical package on the university mainframe. For this study, they went to Israel, where the proportion of observant Jews is much higher than that found anywhere else. Also, increases in the granularity of public databases meant they could study all occasions of Passover, no matter where it fell on the Gregorian calendar, and by cutting the data along gender lines, they discovered an interesting thing. Although there was a very significant “death-dip” overall, the data for women showed no significant dip at all, so the “overall” rate was actually all men.
This gender divide also played a part in the very interesting findings of Phillips et al.’s 1992 study of the birthday effect on mortality. In response to the finding that men tend to have a death spike before their birthdays while women tend to have a death dip, Phillips, in an interview, speculated that men in a capitalist and individualist society see their birthdays as “deadlines” while women tend to see still being alive for each birthday as a “lifeline.” 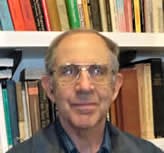 Although the senior author of the 1973 study, Phillips was only a few years beyond attaining his doctorate (where his unpublished dissertation was “Dying as a form of social behavior”). When he was nearing the end of his active professorship at UCSD (he’s currently Emeritus Faculty there), he was already quite well known due to the intervening publications, some of which spawned much media coverage and many follow-up studies and even policy changes, particular his work on suicide. So, his last major paper, the one on Christmas death trends, gained a lot of attention.
By 2010, Big Data and big tools were available to the social scientist. The Christmas study of that year is still being discussed in the Big Media today. Contrary to popular belief at the time, it was found that deaths from suicide and homicide dip dramatically from mid-December through January 1.
However, other death increases make up for it. Magazine articles tend to stress that “Christmas is dangerous.” Different gender, age, and economic cohorts have dramatically different death rates and causes. In terms of causes of death, the big three are heart ailments, traffic accidents, and accidents in the home. Cancer death rates overall appear neutral, but deaths of cancer patients in the home exhibit the same “death-postponement” dip as Yom Kippur, Harvest Moon, and women’s birthdays. However, cancer deaths in hospital and institutional settings have an offsetting spike.
I tried to find some studies on other winter holidays such as Diwali. (Just this year, Diwali gained recognition as an official American calendar holiday, although it’s not a U.S. federal holiday.) Now I’m running into a data problem of the current day, the tendency of big media and monetized sources to overwhelm search engines. I am considered a Google search expert, but the COVID disaster in India means that any search containing the words “Diwali” (which was early November this year) and “death” is going to be all COVID news.
I did find a major study on death rates during Ramadan, which, not surprisingly, spike in a similar way to Christmas. There are some major differences in the size of the spike, by geography (Muslims are probably the most geographically spread religion now), gender, age, cause of death, and where on the Gregorian calendar Ramadan falls.
As at Christmas, both suicide rates and homicide rates during Ramadan in areas where the population is predominantly Muslim go way down. Also as at Christmas, a lot of the natural-cause deaths are probably because of the subject postponing care until after Ramadan. Some of the deaths are simply due to the rigors of observation, especially for a male adult (with their extra pre-dawn prayers) in a time and place where the daylight hours are very long.
I guess this is a lot to digest. I guess I’m still a weird kid, looking at solemn public holidays and wondering if this is a good day to die, statistically speaking. I hope I haven’t ruined your Christmas. You should be fine as long as you get a checkup now, avoid alcohol, cars, travel, and hospitals, and remember to take your medicine. 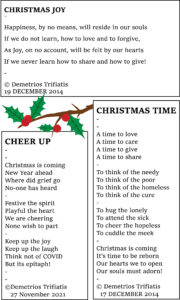