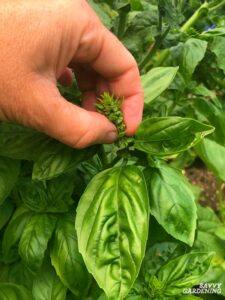 Have you heard of Goldbelly? I first heard of it last week, when I did a search to find where I could get good latkes without having to make or cook them myself. Of course, I meant to be searching for a local deli selling latkes to go or a supermarket with frozen ones or maybe even ready to eat. Anyway, I didn’t specify “local.” in my results were tons of options from Goldbelly, but they were from non-Minnesota cities. And consequently, way out of my price range.

And then, as so often happens with me (I think Google is spying on me. No, do you think?) not 24 hours later, I came upon this article in The Eater (DoorDash Is Now Offering ‘National Delivery’ by Shipping Restaurant Food Nationwide – Eater) which asked if DoorDash was trying to compete with Goldbelly. This led me not only to look into Goldbelly (I had already been tracking DoorDash’s shenanigans. See last month’s “The Dish”) but also to look into all the restaurant food delivery services I am familiar with.

I learned a lot. We’ll start with Bite Squad. Except for self-delivery by Pizza Luce, Bite Squad is my go-to for to-go without going anywhere. They seem to have more of the kind of places I like, and less of the junk. But it turns out that in the vast internecine struggle that is U.S.-based restaurant delivery, Bite Squad isn’t even a player. It’s just that it was founded in Minneapolis, so, like e-Democracy in the neighborhood online forum world, it just looks bigger from here because it’s close to home. They aren’t even on Wikipedia’s list of restaurant delivery services.

On the other end of the spectrum, Goldbelly is not on that list either, because they don’t deliver food from a restaurant ten minutes away that you can eat immediately. They deliver food (ship would be a better term) across the country, in various forms, such as frozen, chilled and ready to cook, in family meal size, or even larger quantities. The reason DoorDash is said to be going into competition with them is that they recently announced they were gearing up to provide cross-country too.

And my reaction to that was the same as The Eater’s. Their headline and subhead read “Even Though It Still Hasn’t Mastered Local Delivery, DoorDash Is Debuting Nationwide Shipping

The on-demand delivery app will now ship ‘iconic eats’ all across the country. Why though?” Which is, in fact, very similar to my reaction to Goldbelly. Goldbelly can ship you frozen latkes from the most popular maker in Los Angelesfor about $70! But why would you want them to? Can they possibly be $50 better than the same quantity of frozen latkes from your local supermarket?

The real issue here, in my opinion, is that the competition between restaurant delivery services is warlike and ugly. Given the fact that DoorDash is currently winning that war by a mile, despite massive problems including lawsuits, tip theft, and spotty quality, why do they think branching into other services on top of all that is a way to improve? 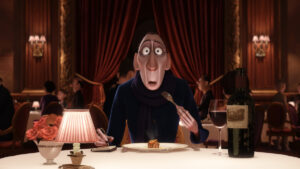 I have to see this fairly old Disney film about restaurants. I have a deep and visceral resistance to most Disney films. I broke down and watched “The Lion King,” but I hated it. But I’m sure I will love “Ratatouille.” For one thing, although the theme of this film is food (and Paris and the modern version of the haute monde), its subtext is words. It is full of clever linguistic (ahem – one of the characters is named Linguine) and stylistic in-jokes, making it a literary trivia quiz on top of a heartfelt movie in the Disney tradition of “Cinderella” and others that elevate the lowly and school the know-it-alls.

What brought this on? Ryan Sutton, food critic for The Eater, on being compared to Anton Ego, the food critic character in “Ratatouille,” responded with a savvy essay about how Anton Ego is actually the hero and not the villain.Actually, Ratatouille Critic Anton Ego is the Real Hero of the Movie – Eater

How to grow a monster basil plant indoors

There are numerous YouTube videos, articles and books about growing edible things indoors. If you just want an unlimited amount of great basil for the rest of your life (and who wouldn’t?) I think this is one of the best. It’s all in the pruning, plus maybe choice of pot and just basic plant care. But mainly if you’re getting spindly basil that eventually dies, you’re pruning it wrong. Check this out: How to Prune Basil for Big, Bushy Basil Plants (With Photos) (ruralsprout.com).

With the advent of fall, I start craving Brussels sprouts, preferably roasted or stir-fried. My new Cuisinart convection toaster-oven does excellent Brussels sprouts on both the “air-fryer” and the “broil” settings. Restaurants like to stick roasted Brussels sprouts on their seasonal menus, so I had lots for comparisons. Here are my rankings of four of the best:

I rejoiced at the return of indoor dining at two of my favorite hangouts in South Minneapolis, one of which is Reverie. They were only in their “new” space on 35th Street just west of Bloomington Avenue for about a year when COVID hit, and were totally closed longer than most, takeout only longer than most, and then offered patio dining as long as they could while fixing up the interior for more space.

I was one of their crowdfunders for the new space, so I still had some free meal “perks” on a card to use. I had their signature burger (delicious but a little soft and as is the normal case in restaurants, way too big and sloppy to actually eat like a burger). I had a side of fries and also ordered the above-mentioned smoked Brussels sprouts. I took home leftovers of both of those. I had a clever drink (iced, non-alcohol) which I liked, but can’t remember the details of. 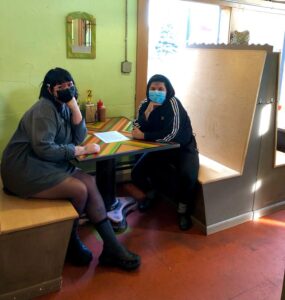 Modern Times pre-COVID was more than just my favorite lunch spot. It was my refuge, my reading room, my introvert’s social contact point, my office if I needed to meet with someone. I can barely express how much I missed them for about 20 long months. I did get some takeout meals, but that did not assuage my need to go there.

So, I was finally back, and instead of getting one of my old favorites, I got something new to me, a sandwich called Kate Bush. This contains scrambled egg, beet mayo, avocado, and some other things, on grilled sourdough bread. Recommend. I had a side of garlic fries and a Leland Palmer (lemonade and hibiscus iced tea). For old times’ sake, I read a library book while I ate. Bliss.

I visited the Bad Waitress diner on 26th Street and Nicollet Avenue for the first time ever a little over a week ago. I had a quick check-in type of appointment at the Whittier Clinic at 1 p.m., then a longer more serious one at 4 p.m., so I left my car in their lot and perambulated up and down Nicollet, stopping at the Bad Waitress for a planned lunch. (I was actually going to lunch at Quang but it was packed with people at 1:30 p.m., so no.) 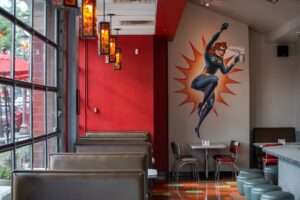 The Bad Waitress has been there for years and is pretty popular, so I don’t need to say much; they’re a known quantity. It looks like their drinks are one of their main selling points. Their food is good but not adventurous – diner food, whatever’s popular, well-made and quick. I had the Trash Browns: hash browns cooked with a wide array of vegetables and a thick topping of good cheddar, then two eggs in your chosen style (over medium for me).Sourdough toast was colorless, but hot and pre-buttered, and with more than enough jam on the side. I had coffee to drink; it was fine, but I was surprised that the menu didn’t say anything about it. Nowadays you expect to learn the roast and the roaster, if not the country or even the plantation of origin.

The Bad Waitress offers the option of using an app at your table to order, instead of the usual counter order. Similar to what J. Selby’s has, it’s the wave of the future, I expect, and will outlast the pandemic which sparked it.