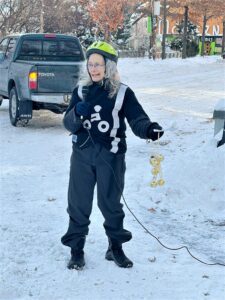 Amy Blumenshine sings ‘Jingle Bells’ at the ‘party with a purpose.’

Powderhorn neighbors came together at 32nd Street and Elliot Avenue on Dec. 12 for an outdoor “party with a purpose” to improve street safety for bicyclists and pedestrians.
Neighbors are petitioning the city to make needed calming of the streets before next spring’s asphalting instead of after, and then having to redo what is considered a 20-year project and pay twice – via assessments – for street improvements that would be cheaper to do once.
Incoming newly-elected Minneapolis officials Park Board Commissioner Becky Alper and City Council Member Jason Chavez addressed the crowd, promising to do what they could after taking office.
We jingled bells and sang a version of “Jingle Bells” with the chorus “We love our kids, we love our homes, we love our neighborhood.”
A large, former Heart of the Beast MayDay Festival puppet presided in the center of the intersection where some neighbors hope a traffic circle will be installed. Sandy Spieler, former HOBT artistic director, led the crowd in a spiral dance. We connected by red ribbons to enhance pandemic distancing. Afterwards, neighbors socialized around a firepit.
Organizing for calmer streets began months earlier, after a neighbor on the corner with the park saw near-misses as children crossed to the park while vehicles sped past. Other neighbors shared her concerns and started discussing and exploring solutions – albeit in pandemic Zoom fashion. We put up signs intended to slow traffic along 32nd Street and Elliot and 10th Avenues. We discovered that plans were on the shelf at the city for a Southside Greenway, a north/south-axis major greenway like the east/west Midtown Green-way. The first step, suggested the plan, was to find some blocks for a pilot.
Also, Safe Routes to School is a current city project to change infrastructure to improve safety, reduce traffic and improve air quality near schools and is in the planning for our streets.
As we sought support at the city, we found that members of the Bicycle Advisory Committee (BAC) affirmed that physical impediments like bump-outs were considered necessary for reducing speeding. The BAC helpfully asked Public Works via a resolution to create a simple bike crossing at the cul-de-sac at 10th Avenue and Lake Street. We’ve been waiting for a legitimate bike crossing on this major bike route ever since 2008 when the cul-de-sac was built. Now, with the rebuild of the U.S. Bank building, bike access and safety are even more compromised. This is especially galling to neighbors since many risked their personal safety as they tried to keep the building from burning during the chaos in the aftermath of the murder of George Floyd. Yet, Public Works has so far never fixed the bike blockage created in 2008.
The Dec. 12 event was a step in engaging more neighbors in the discussion of what changes would be best – a design in progress. Neighbors hope that some sort of calming can be instituted as part of the re-asphalting, even if it is just a temporary pilot.