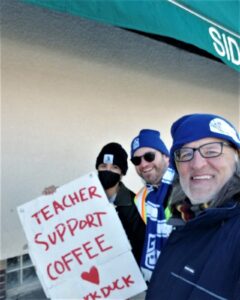 There have been a number of significant changes along East 38th Street in the past year. We only have space to tell of some of them. Let’s visit the places on 38th starting at Nicollet Avenue South and moving eastward toward 42nd Avenue South.

This hub is doing pretty well. The corner of Nicollet and 38th is dominated by restaurants, but there are other businesses nearby. One of these is Quality Coaches, one of the best of the several automotive repair shops along East 38th Street. They’re located at 20 W. 38th St. and are open Monday through Friday from 8 a.m. to 5:30 p.m.
Another neighborhood stalwart is Nicollet Ace Hardware, a family-owned part of the Ace chain, and a frequent winner of customer awards for “best of the Twin Cities.” Sadly, the Nicollet Ace store suffered a major break-in and robbery on Saturday, April 23, just past midnight.Here’s a bit from their Facebook post about it (with 198 comments, attesting to just how much this hardware store means to the neighborhood).
“At around 12:45 a.m., a couple people broke out the glass in our doors and proceeded to steal power tools, outdoor equipment, socket sets, cash and other minor things. It was basically a snatch and grab for the neighborhood. Six different people came in and took whatever they wanted. Some even helped themselves to a red Ace wheelbarrow to help get all the power tools in the vehicle.” 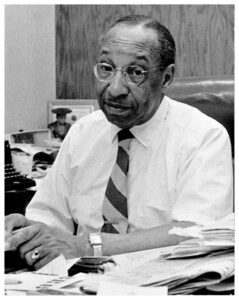 Nicollet Ace Hardware has a small team of resident watch-cats. None of them were harmed or ran away, but they were no match for this criminal gang.
The dining establishments around this corner and the surrounding blocks include Petite Leon, which I really want to visit because I hear such great things, but have not gone there yet. Others that I have visited at least once include Five Watt Coffee, Nighthawks Diner & Bar, Butter Bakery Cafe, Hola Arepa, and Kyatchi.

This hub is dominated by the Seward Community Co-op Friendship Store. Once a source of controversy, it is now seamlessly integrated into the community and a source of good union jobs for neighborhood residents. Seward Co-op is celebrating its 50-year anniversary all year, although the Friendship Store is considerably newer. Be sure and visit them early and often.
The other big player in this hub is the Sabathani Community Center. They have partnered with other nonprofits and a developer of senior housing to build an affordable rental apartment building with 48 units. The building is completed (see picture) and now accepting applications. 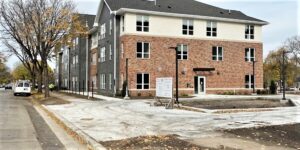 Besides Sabathani Community Center itself, there is another place here that is even more of an African American cultural institution – the Black-owned local media outlet, the Minnesota Spokesman-Recorder. The Spokesman-Recorder, with offices located at 3744 4th Ave. S., is published weekly on Thursdays. It has been in publication for almost 88 years, starting out in August 1934 as the Minneapolis Spokesman, by publisher Cecil Newman. This year saw the sad death of one of its best-known journalists, activist Mel Reeves, in early January 2022.

George Floyd Square (GFS), the official name of the corner of Chicago and 38th Street, was a neighborhood hub even before it gained worldwide attention as the site of the murder of George Floyd by a Minneapolis police officer, aided and abetted by three other officers. This May 2020 event led to a month of uprising which included widespread rioting and the unprecedented burning down of a Minneapolis Police Department precinct station. It also led to the unprecedented trials and convictions of all four former MPD officers (with additional trials and appeals still to come), and a severe stirring of the Minneapolis political pot.
Naturally, these events have reverberated among the residents around GFS and the owners of its many wonderful small businesses and nonprofits. Some have remained – The Third Place Gallery, the Chicago Avenue Fire Arts Center, Smoke in the Pit, and Centro de Trabajadores Unidos en la Lucha (CTUL, pronounced “say-tool”). Some have gone all-online such as Flotsam + Fork, or abandoned their physical space at GFS while staying in business, like Black Eye Roasting Company coffee shop. Some are still in a state of flux, like Dragon Wok (now Dragon Wok Delivery) which is temporarily shuttered but not giving up just yet. 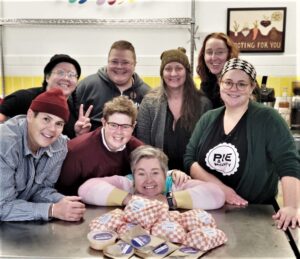 In fact, the whole of GFS is in a state of flux right now. A news item in the Star Tribune in late April reported on the unstable state of city plans to reconfigure GFS with, hopefully, at least partial consensus from the stakeholders. Private listening sessions with these groups – business owners, residents, the volunteer caretakers, faith communities and others – took place throughout the first months of 2022. On April 23, a town hall was held partially outdoors at Phelps Recreation Center nearby, and then a virtual town hall took place on Tuesday, April 26. Consensus is still a hazy and far-off goal.
If I may lapse just a tiny bit (ha ha) into op-ed territory here, I am personally distraught, though not surprised, that for about a year, single vehicle traffic has been restored at GFS but not road maintenance or – critically – public transit. Residents and would-be shoppers who prefer bus transit over cars and bikes need to walk between two to six blocks between the nearest operative bus stop for the corner, which is supposed to be served by two buses – the frequent bus route #5 on Chicago Avenue and the less-frequent bus route #23 on 38th Street.
Despite these less-than-ideal business conditions, new places have managed to appear in GFS, particularly in the space formerly held by Black Eye Roasting’s main coffee shop. For a while it was Tea Street Cafe, which sold coffee, tea, sandwiches and bakery items. That now has been supplanted by Forreal Coffeehouse, soft-opened with a scheduled grand opening on May 25. This is an interesting concept – combining a coffeehouse with a real estate sales office, and offering internships in real estate sales to people in the community. 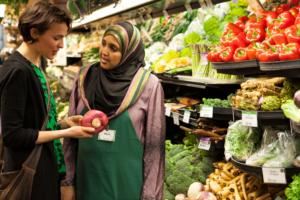 As a hub, GFS has other interesting businesses and organizations a few blocks in each direction. A couple blocks north, on the corner of Chicago and 36th, you’ll find two excellent but very different food businesses, linked tangentially by the flexible concept of “pie.” Jakeeno’s is more than a pizzeria, being a longtime mainstay with pasta and other Italian favorites, for dining in or taking home. Pie & Mighty makes artisanal pies that are both phenomenally good and phenomenally popular. The pies are takeout only, by subscription, and must be pre-ordered (see ordering details at www.pieandmightymsp.com). They also sell pie by the slice to walk-up customers during their retail hours (Friday 3 to 6 p.m. and Saturday 9 a.m. to noon), on a first-come, first-served basis.
To the east, about halfway to our next hub, at 1401 E. 38th St., is Urban Touch Barbers. This is a Black-owned all-round hair-cutting establishment that specializes in styling Black hair, but can cut and style any color, any age, any gender. It’s a real community asset. They don’t have a website, but do have a Facebook page with no posts, just customer selfies showing off their style.
Across the street is what used to be my auto repair place, Clyde’s Auto Service. The sign still says that, but the business is no longer open, as they are retiring. Google Maps shows a new name – Vidal’s Auto Service I – and friends have told me they’ve seen activity there. A quick search shows Vidal’s to be listed as an ongoing business in another part of town, so I surmise they are moving in and hopefully there will be an announcement in the near future.

Cedar Avenue hub to the light rail and east 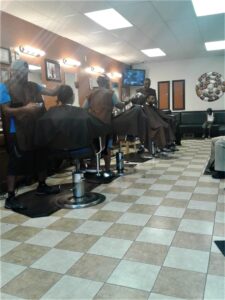 At Cedar Avenue and 38th, the news is that Lucy’s Market, a small but excellent Ethiopian restaurant situated in a convenience market selling many East African staples, is reopened as of February, but it’s only open Saturday and Sunday, 11 a.m. to 8 p.m.
Around the corner is one of four coffee shops I want to mention along 38th Street. Duck Duck Coffee is located at 1830 E. 38th St. They are open slightly odd hours (closed Tuesdays) so check Google. The next coffee shop in this stretch is my “local,” i.e., the only coffee shop in true walking distance to me – Sisters’ Sludge Coffee Café and Wine Bar. Owned by sisters who are identical triplets, Sisters’ Sludge is a place “born from a love of French bistros, English pubs, and Italian espresso bars,” as their website says. Their kitchen serves food until 7 p.m., with panini sandwiches, salads and various small plates on the menu. They’re located at the corner of East 38th Street and 23rd Avenue, and are open until 10 p.m., which is exciting in this day and age.
A bit further east, at 2803 E. 38th St., is Key West Bistro. This too is more than a coffee shop, with Cuban-style drinks and sandwiches, baked goodies and more. Key West is open to 6 p.m. and is closed all day Sunday.
The final coffeehouse is one I haven’t been to in ages. Fireroast Café was at one time almost the cultural annex of Walker Church, as several of our members played live music there and we had morning coffee hours once a week. But things move on – people move away, or die, or just stop drinking coffee. Fireroast Café is still there, at 3800 37th Ave. S. They have a covered patio, open year-round, they have Sebastian Joe’s ice cream by the scoop, or by the pint to-go, they have breakfast, and burritos, and breakfast burritos, and they have wine and beer. But they are now only open to 5 p.m. – no more late nights with music. 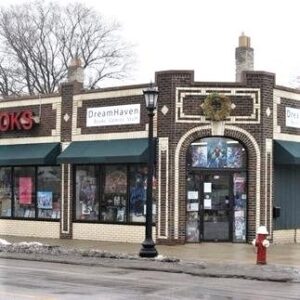 Some non-food related spots on this stretch of East 38th Street include another long-running auto repair that is not closing for retirement – Action Auto Systems at 2328 E. 38th Street. Family-owned and operated since 1975, they repair domestic, imported and hybrid autos and will provide a free loaner car on request while your work is being performed. Check out the stellar reviews on their website, with five-star ratings by over 300 customers.
Another business I may be calling soon is Brushed Monkey, a painting service for interior jobs. They consider themselves not just painters, but artisans, as many of the folks on their team are also semi-professional artists. Brushed Monkey can not only paint your walls perfectly, they’re also able to create beautiful faux finishes, fine Venetian plasters, and even custom murals. You don’t need to actually visit their 38th Street office to book their services, just call them at 612-803-1356. Check out their Facebook page to see photos of their work and their glowing reviews.
DreamHaven Books and Comics is another venerable Minneapolis business that has been on 38th Street for a while, and has been in business even longer. They’re located at 2301 E. 38th St. and are also extremely online. The “News” section of their website is awesome and indescribable – check it out. You can shop online and do a convenient pickup, or shop in person at their always-interesting shop.
Finally, a couple of years ago Fairview Hiawatha vacated their clinic building at 38th and 42nd Avenue South, across the road to the east of the Riverview Theater. This is now the location of a private clinic called Minnesota Allergy and Asthma, according to Google Maps.