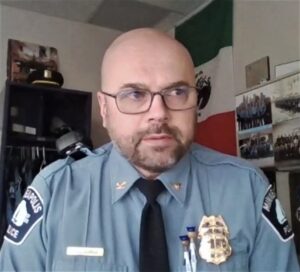 This month (May 2022) marks 28 years that Inspector Jose Gomez has been with the Minneapolis Police Department (MPD). On Feb. 1 he began his new position as Inspector for the 3rd Precinct, replacing Sean McGinty. His background includes working with juvenile offenders and gun violence. Few residents of Minneapolis need to be reminded that this is the precinct that sustained severe damage during the 2020 civil unrest, including the burning of the 3rd Precinct station. To date there is no identified, permanent home office. Gomez would like to find a home in the precinct. It is a neighborhood recovering from its wounds and grievances. The 3rd Precinct serves the following neighborhoods: Longfellow, Central, Seward, Elliott, Phillips, Powderhorn, Hiawatha, Howe, Cooper, Morris Park, Ventura Village, Minnehaha, Northrop, Bryant, Corcoran and Keewaydin. It is 58 square miles in area, with approximately 103,000 residents. It is bounded by I-35W, I-94 and the Mississippi River.
Gomez is both excited and concerned as he begins his new post. He is excited about the opportunity to make a positive impact in the precinct. His concerns include the strained relations and lack of trust between some community members and the police, and the staffing shortages he and the police force face in general.
Without a doubt there are challenges, and Gomez is very aware of what they are. The precinct is large and densely populated with a diverse (44% non-white) population, including a large Latino population (9.6%). Gomez has roots in Mexico and is proud of his heritage and culture. 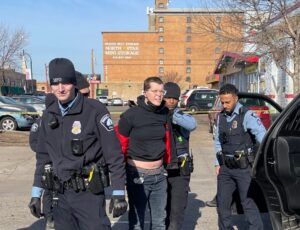 A young person was arrested as part of the bust of the homeless encampment on Lake and 5th Avenue on April 19. He screamed, “My crime is poverty.” The police seemed firm but friendly. The Mod Squad, some of the young progressives on the City Council, visited homeless encampments in the first weeks of their term of office. It would be very helpful if City Council members and social services professionals from the city and the county were present at homeless encampment busts to direct our houseless neighbors to alternative housing.

While Minneapolis voted against defunding the police in November 2021 (56%) there have been changes, including the creation of the Office of Violence Prevention (OVP), directed by Sasha Cotton. Cotton believes that the rise in crime is a sign of desperation, of needs not met, things not working and no clear path to better times. The 2022 budget approved $192 million for policing and $7.8 million for the OVP. An additional $7 million was granted by the American Rescue Plan Act. The OVP is involved in developing a co-responder program for mental health issues, outreach and intervention, gang violence interruption, hospital-based intervention, and 911 and de-escalation training. Other changes include directing calls to 311 when the issue is theft or property damage and parking-related calls to Traffic Control. These changes were made to better meet the needs of the communities and free up officers in order to shorten response times to 911 calls.
Additional changes include a ban on neck restraints (in favor of the use of lower levels of force) and on deactivation of body cameras during an event. There are also new restrictions on no-knock search warrants, restrictions regarding who manages crowd control, restrictions on pretextual stops, and timely discipline decisions by the police chief. Programs are also in motion regarding community health, youth, police training, intervention programs and police accountability recommendations from an appointed focus group. What is not clear are the policies related to disciplinary procedures such as coaching, and formal documented discipline, which is more likely to be on public record.

In 2020, Minneapolis had nearly 900 police officers. Today, the force has around 600. Currently, the 3rd Precinct has 75 sworn officers (down from 120 in 2020) covering three shifts. This includes not only officers but also two investigators, 12 sergeant supervisors and three lieutenants. The Crime Prevention Unit was moved to Neighborhood & Community Relations. The numbers are down by two to six officers per shift. Since 2020 and the pivotal event of George Floyd’s murder there has been a 22% drop overall in the MPD, as officers have resigned, retired, or gone on medical leave, and, of course, there has also been attrition. Gomez would like to have eight or nine more officers per shift so that in addition to squad car patrol, he could include foot patrol which is known to improve relations between the police and the community and deter crime.

In 2021 there were 97 homicides in Minneapolis; to date (April 2022) there have been 21, with nine in the 3rd Precinct (42.8%). While some crimes are down, such as vandalism, robbery, sex offenses and property theft, the 3rd Precinct has made 69 arrests, representing 26% of the city’s arrests in all five precincts. Thirty-nine of these are considered violent crimes. The city crime dashboard indicates that the precinct has had 49 carjackings, 412 motor vehicle thefts, 546 assaults (66 of them domestic assault cases) and 166 breaking and entering offenses.

How many officers is the right number? What should their focus and priorities be? What would make us feel safe in our neighborhoods? Defunding versus reform? What kind of reform? The debate goes on and is not settled. In October 2020, Mayor Frey along with the City Council commissioned CNA Consulting of Minneapolis (at a cost of $170,000) to address policing and crime in Minneapolis as anxiety about rising crime mounted. Their recommendations included:
• Staff one officer per squad car (not two) to free up 73 to 106 officers.
• Use civilians for non-violent emergencies (some can be handled via phone).
• Take administrative reporting off the officers and handle it elsewhere.
• Find time for pro-active work that creates public trust, not just 911 calls.
Currently, Minneapolis has a court order to hire 190 officers by June 30, 2022. The current number of sworn officers is 579. The budget allows for growth of up to 756 officers.
Questions remain: Is there middle ground? Can the police department be properly staffed and community oriented? Can the department include safety beyond the traditional policing model? Can the MPD and OVP together properly serve our communities? Can we imagine a new approach to policing and community health and safety? Is “serious reform” possible? Clearly, some steps have been taken, yet reform is still in an embryonic stage.

There have been numerous studies (see the Philadelphia study at www.police1.com) on the advantages of foot patrol by police, especially in “hot spots” (high crime areas). Amongst the advantages are officers getting a better lay of the land; reduced complaints; fewer pat-downs; more confidence between the community and police; and more continuity as the same officers patrol the same beat. As one officer put it, “it’s difficult to build relationships with people when you are driving by them.” On foot, police can interact with the unsheltered, gangs, people in parks. Foot patrol has a way of allowing for the flow of information – police become more approachable and problem-solving is more easily fostered. It also increases de-escalation, decreases fear and allows for a more humanitarian approach. The challenges are that it is manpower-intensive and costs more. Also, productivity measures may need to change. It’s difficult to measure arrests and citations against relationship-building and problem-solving. Short-term goals must be measured alongside long-term goals.
Inspector Gomez encourages his officers to get out of their squad cars and interact with residents when possible. With staffing shortages there are no longer exclusive foot patrols like once existed on arteries such as Lake Street and Franklin Avenue. Officers are offered overtime for foot patrol which often involves checking on local businesses. Gomez also believes in police being involved in community activities, such as neighborhood meetings, sporting events and engagements where the police and those they serve have an opportunity for conversation and can learn more about how to work together to create and maintain safe neighborhoods.